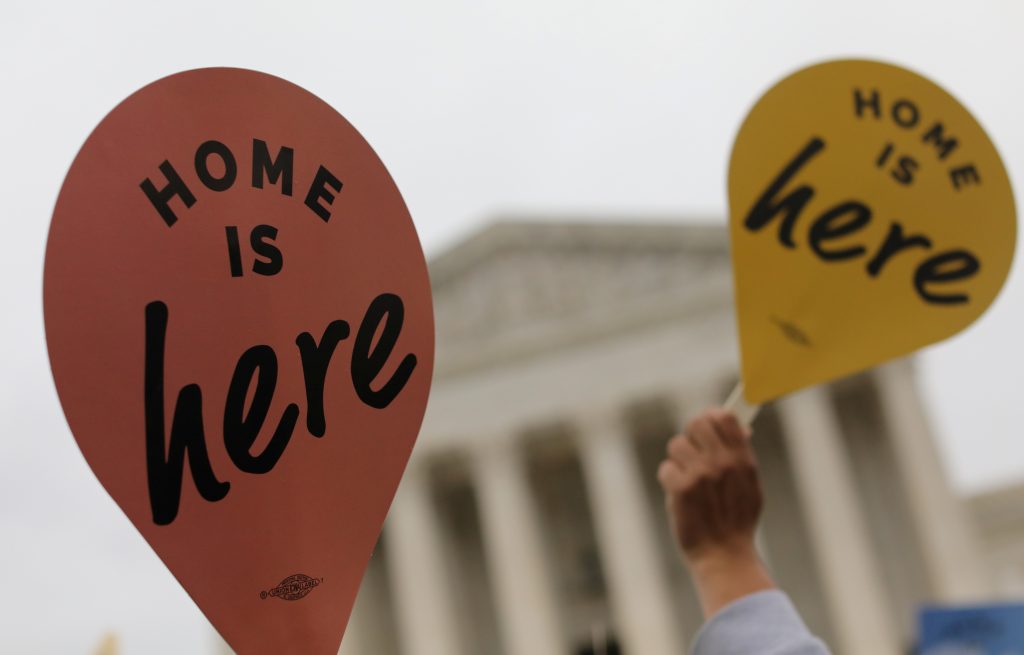 The Supreme Court’s conservative majority signaled support on Tuesday for President Donald Trump’s bid to kill a program that protects hundreds of thousands of immigrants – dubbed “Dreamers” – who entered the United States illegally as children, even as liberal justices complained that the move would destroy lives.

The court’s ideological divisions were on full display as it heard the administration’s appeal of lower court rulings that blocked the Republican president’s 2017 plan to rescind the Deferred Action for Childhood Arrivals (DACA) program, created in 2012 by his Democratic predecessor Barack Obama.

DACA currently shields about 660,000 immigrants – mostly Hispanic young adults – from deportation and provides them work permits, though not a path to citizenship. President Trump’s bid to end it is part of his hardline immigration policies.

Conservative justices questioned whether courts even have the power to review Trump’s action and also seemed to reject the views of lower courts that his administration had failed to properly justify ending DACA, a program Obama implemented after Congress failed to pass bipartisan immigration reform.

Liberal justices emphasized the large number of individuals, businesses and others who have relied on the program and indicated that the administration did not sufficiently weigh those concerns. Justice Sonia Sotomayor referred to Trump’s decision as a “choice to destroy lives” and indicated that his administration had failed to supply the required policy rationale to make the move lawful.

Kavanaugh said he assumed that the administration’s analysis of the impact that rescinding DACA would have on individuals was a “very considered decision.”

“I mean, this is a serious decision. We all agree on that,” Kavanaugh added.

A ruling is due by the end of June.

Trump’s administration has argued that Obama exceeded his constitutional powers when he created DACA by executive action, bypassing Congress. Trump has made his hardline immigration policies – cracking down on legal and illegal immigration and pursuing construction of a wall along the U.S.-Mexican border – a centerpiece of his presidency and 2020 re-election campaign.

The challengers who sued to stop Trump’s action included a collection of states such as California and New York, people currently protected by the program and civil rights groups.

Even if Trump were to lose this time, his administration would be free to come up with new reasons to end the program in the future, a point picked up by Gorsuch.

“What good would another five years of litigation over the adequacy of that explanation serve?” Gorsuch asked.

Conservative Chief Justice John Roberts, who could be the pivotal vote in deciding the case, likewise indicated he was satisfied with the administration’s rationale.

Roberts, however, had appeared sympathetic to Trump in a case this year on the administration’s attempt to add a contentious citizenship question to the 2020 census – a move critics said was intended to deter immigrants from being included in the nation’s official population count. Roberts cast the decisive vote against the president in a 5-4 ruling.

The Supreme Court previously handed Trump a major victory on immigration policy last year when it upheld as lawful his travel ban blocking people from several Muslim-majority countries from entering the United States, finding that the president has broad discretion to set such policy.

Lower court rulings in California, New York and the District of Columbia left DACA in place, finding that Trump’s move to rescind it was likely “arbitrary and capricious” and violated a U.S. law called the Administrative Procedure Act.

The young people protected under DACA, Obama said, were raised and educated in the United States, grew up as Americans and often know little about their countries of origin.

Sotomayor, the first Hispanic Supreme Court justice, wondered if the court should take into account the fact that Trump has said he would look after “Dreamers.”

“He hasn’t” taken care of them, she said. “And that, I think, is something to be considered before you rescind a policy.”

Much of the administration’s reasoning was based on then-Attorney General Jeff Sessions’ conclusion in 2017 that the program was unlawful. Liberal Justice Ruth Bader Ginsburg pressed U.S. Solicitor General Noel Francisco, who argued the case for the administration, on the government’s reliance on the assertion that DACA was unlawful.

The administration could have just said “we don’t like DACA and we’re taking responsibility for that instead of trying to put the blame on the law,” Ginsburg said.

Francisco, who also argued the travel ban case, said the administration was not trying to shirk responsibility for ending a popular program.

“We own this,” Francisco said, referring to Trump’s decision to kill DACA.

Trump has given mixed messages about the “Dreamers,” saying in 2017 that he has “a great love” for them even as he sought to kill the program that protected them from deportation.

Trump on Tuesday took to Twitter to attack “many” DACA recipients as “tough, hardened criminals,” without offering evidence, and again dangled the possibility of a deal with congressional Democrats to allow people protected under the program to remain in the United States. Trump has never proposed a detailed replacement for DACA.

Several hundred DACA supporters gathered outside the court on a gray and chilly Tuesday morning, chanting, banging drums and carrying signs that read “home is here” and “defend DACA.”