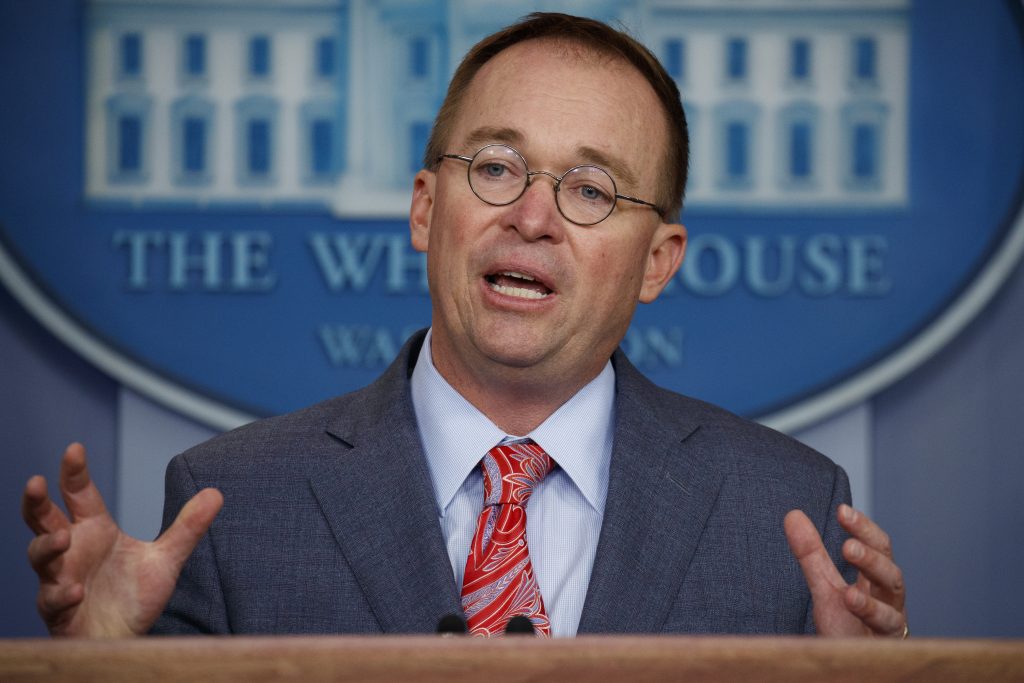 White House acting chief of staff Mick Mulvaney is facing opposition, including from a former Trump administration adviser, in his bid to join a lawsuit over testimony in the House impeachment inquiry.

The opposition from Charles Kupperman, the former deputy national security adviser who sued over a subpoena from the House, underscores the lack of a unified approach from Trump administration officials in responding to the impeachment inquiry, which enters a critical public phase this week. Several people have testified in defiance of White House orders, while others have skipped their scheduled appearances.

Mulvaney on Friday asked to sign onto Kupperman’s lawsuit, which seeks to have a court decide on compliance with congressional subpoenas. Kupperman said he faces two conflicting directives — one from Congress telling him he must testify, the other from the White House telling him he is immune from having to testify — and that a judge should decide which branch of government should prevail.

Like Kupperman, Mulvaney has defied a subpoena from impeachment investigators. Kupperman’s has since been withdrawn, though his lawyer also represents former national security adviser John Bolton, who did not appear for a scheduled interview last week and has not been subpoenaed.

Lawyers for Mulvaney said their arguments raised similar issues that belong in the same lawsuit since they both have been close advisers to the president and in regular contact with him.

But in a court filing Monday, Charles Cooper, who represents Kupperman and Bolton, said there were important distinctions between Mulvaney and Kupperman’s situations, including that Mulvaney has already spoken publicly about issues central to the impeachment inquiry from the podium of the White House briefing room.

“Plaintiff, in contrast, has never publicly disclosed information relating to any of his official duties, including the matters under investigation by the House,” Cooper wrote of Kupperman. The attorney said there is a “serious question” as to whether Mulvaney waived the immunity protection with his public comments.

Cooper also suggested Kupperman and Mulvaney both have arguments at their disposal that the other might not be able to exploit.

Mulvaney, for instance, still works for Trump, while Kupperman does not. That means that even if Kupperman were to be directed to testify, Mulvaney, as a current White House employee, could nonetheless look to shield himself behind a Justice Department legal opinion that says close advisers to the president should not have their attention diverted “at the whim of congressional committees.”

But Cooper also suggests his clients may have other, stronger arguments for immunity than Mulvaney since all their duties “concerned advising the President on highly sensitive matters of national security and foreign affairs.”

House Democrats separately opposed Mulvaney’s effort to join the suit. They say Kupperman’s case is moot since the subpoena directing him to appear has been withdrawn.