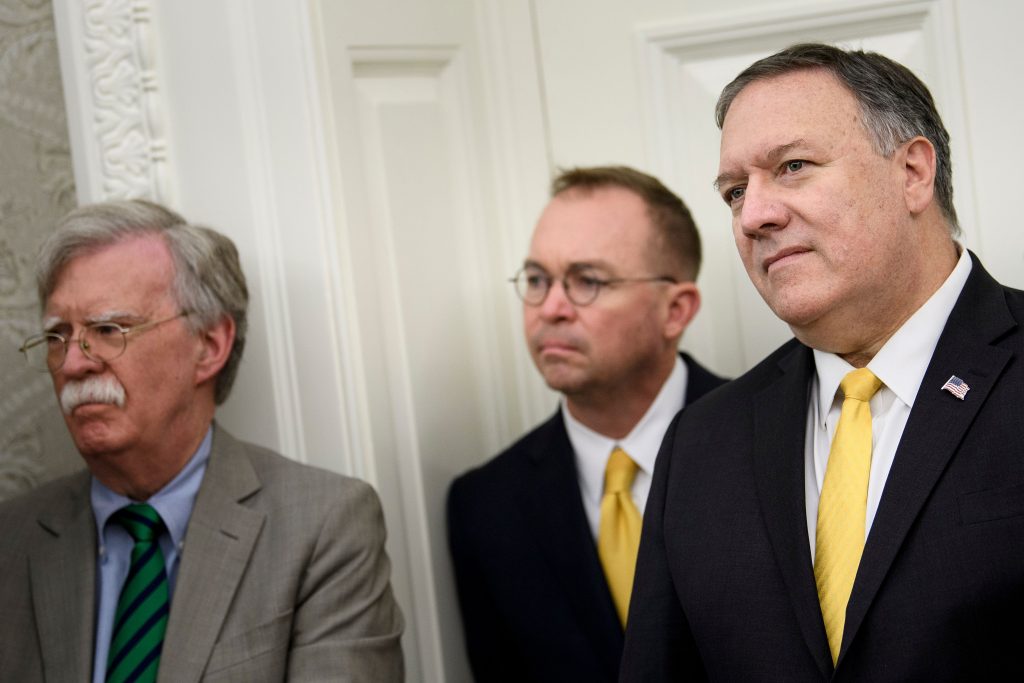 Donald Trump’s effort to get Ukraine to investigate a top Democratic rival went largely unchecked by some of his closest advisers — setting in motion the impeachment inquiry now engulfing his presidency.

The Ukraine episode, depicted in testimony from current and former U.S. officials, illustrates the peril that lies in Trump’s preference for advisers who let him follow his instincts in making policy. And it puts a new light on recent comments from former White House Chief of Staff John Kelly, who said last month that he warned the president not to replace him with a yes man or he’d risk being impeached. Trump disputed Kelly’s statement.

Events surrounding the July 25 phone call with Ukrainian President Volodymyr Zelensky, in which Trump requested an investigation of Biden and his son Hunter, will get a full public hearing as House Democrats accelerate their impeachment inquiry.

Three State Department officials — William Taylor, the top U.S. diplomat in Ukraine; Marie Yovanovitch, former U.S. ambassador to Ukraine, and George Kent, the deputy assistant secretary of State responsible for Ukraine — are set to testify in separate sessions on Wednesday and Friday. They may shed light not only on the president’s decisions, but the actions of his most senior advisers.

Judd Deere, a White House spokesman, said the president “has assembled an incredible team at the White House and across the federal government to help him accomplish undeniable successes,” which included “restoring the nation’s standing in the world.”

Trump has repeatedly said he did nothing wrong related to Ukraine and refers to the call with Zelensky as “perfect.”

National Security Adviser John Bolton, who was forced out in September, was said to have cut short discussions about demanding investigations from Ukraine as the price of an Oval Office meeting with Trump and Zelensky. Bolton also raised concerns about Trump’s use of his personal lawyer, Rudy Giuliani, to play a role in directing the U.S. relationship with Ukraine.

Bolton, whose lawyer says he won’t testify before the House unless a judge orders him to do so, told colleagues Giuliani is “a hand grenade that is going to blow everybody up,” according to testimony by Fiona Hill, Trump’s former Russia adviser.

It is not clear, however, what steps Bolton took to counter Giuliani’s efforts.

According to transcripts of the closed-door testimony to the House, Mulvaney carried out Trump’s orders on Ukraine. He put a hold on nearly $400 million in aid critical to Ukraine’s defense against Russia. No evidence has emerged that he opposed Trump’s demands.

National Security Council aide Alexander Vindman testified that Gordon Sondland, the U.S. ambassador to the European Union, said in a July 10 call that Mulvaney insisted Ukraine would have to provide “deliverables” to get a meeting with Trump. Sondland, according to Vindman, said that meant conducting investigations sought by Trump.

“He was talking about the 2016 elections and an investigation into the Bidens and Burisma,” Vindman said in testimony released Friday.

Burisma Holdings is a Ukrainian energy firm. Hunter Biden sat on its board and received substantial compensation — an arrangement that Trump claims is corrupt, though no evidence of wrongdoing has emerged.

In testimony released last week, Pompeo was portrayed as a passive figure by several top State Department officials. Sondland, who was told by Trump to listen to Giuliani on Ukraine, testified that he discussed Giuliani’s role with Pompeo.

“Pompeo rolled his eyes and said: ‘Yes, it’s something we have to deal with,’” Sondland said.

Sondland also testified that although State Department officials were concerned about Giuliani’s activities, “my speculation is yes, that they hit a brick wall when it came to getting rid of Mr. Giuliani.”

Pompeo’s approach contrasts with that of Tillerson. Two years earlier, Trump repeatedly sought to enlist Tillerson to intervene in a criminal case against a Turkish gold trader who was a client of Giuliani’s, Bloomberg News reported. The trader, Reza Zarrab, would later testify that Turkish President Recep Tayyip Erdogan knew of and approved of a plan to launder money for Iran to evade U.S. sanctions. Tillerson refused to intervene in the case and complained to Kelly.

Someone has to tell Trump “that you either have the authority or you don’t, or Mr. President, don’t do it,” Kelly said on Oct. 26 at an event hosted by the Washington Examiner. “Whatever you do, don’t hire a ‘yes man,'” Kelly said he warned Trump. “Because if you do, I believe you will be impeached.”

In response, Trump said that if Kelly had said that, “I would have thrown him out of the office. He just wants to come back into the action like everybody else does.”

“Kelly and Tillerson confided in me that when they resisted the president, they weren’t being insubordinate, they were trying to save the country,” she said in the interview that aired Sunday.

Haley said they pitched her for more than an hour on resisting the president. But she told CBS their actions were dangerous, offensive and against the Constitution.

In multiple cases, Mueller wrote in his report, Trump’s staff rejected the president’s orders. He said that former White House Counsel Don McGahn, who left the administration last year, refused Trump’s demand to have Mueller removed — and then refused to write a memo saying Trump had never told him to do it.

Tillerson has said that Trump often asked him to do things that were illegal.

“I would have to say to him, ‘Mr. President, I understand what you want to do but you can’t do it that way. It violates the law,'” Tillerson said at an event in Houston last December.

Shortly afterward, Trump said of Tillerson on Twitter, “He was dumb as a rock and I couldn’t get rid of him fast enough.”

Pompeo has yet to give a detailed account of his role. He has publicly bristled at questions about the Ukraine matter, speaking in generalities about wanting to reduce corruption in Ukraine and only confirming well after the fact that he listened in on Trump’s July call with Zelenskiy.

Michael McKinley, a former senior adviser to Pompeo, testified that the secretary didn’t react when he resigned over the affair. Taylor testified Pompeo didn’t respond when he sent a cable warning against a quid pro quo tying military aid for Ukraine to investigations the ambassador saw as designed to aid Trump’s re-election campaign rather than national security.

“Although I received no specific response, I heard that soon thereafter, the secretary carried the cable with him to a meeting at the White House focused on security assistance for Ukraine,” Taylor testified. It’s not clear what Pompeo did behind the scenes.

Even Senate Majority Leader Mitch McConnell, the top Republican on Capitol Hill, has said he lobbied both Pompeo and Defense Secretary Mark Esper to release the Ukraine aid, and neither gave him a reason why it was being held up.

Mulvaney, at a press conference on Oct. 17, confirmed that aid was held up in part to get Ukraine to launch investigations sought by Trump. After a backlash from the president’s allies and foes alike, Mulvaney backtracked, saying the media had misreported his comments.

Sen. Patrick Leahy, a Vermont Democrat who is the longest-serving senator, said having a compliant staff doesn’t absolve Trump.

“He can tell himself no,” Leahy said. “When I was a prosecutor, somebody said about an armed robbery, ‘Well, it’s not my fault they never should have given me that gun.’ Come on, you’re the guy that held the gun, held up the store!”