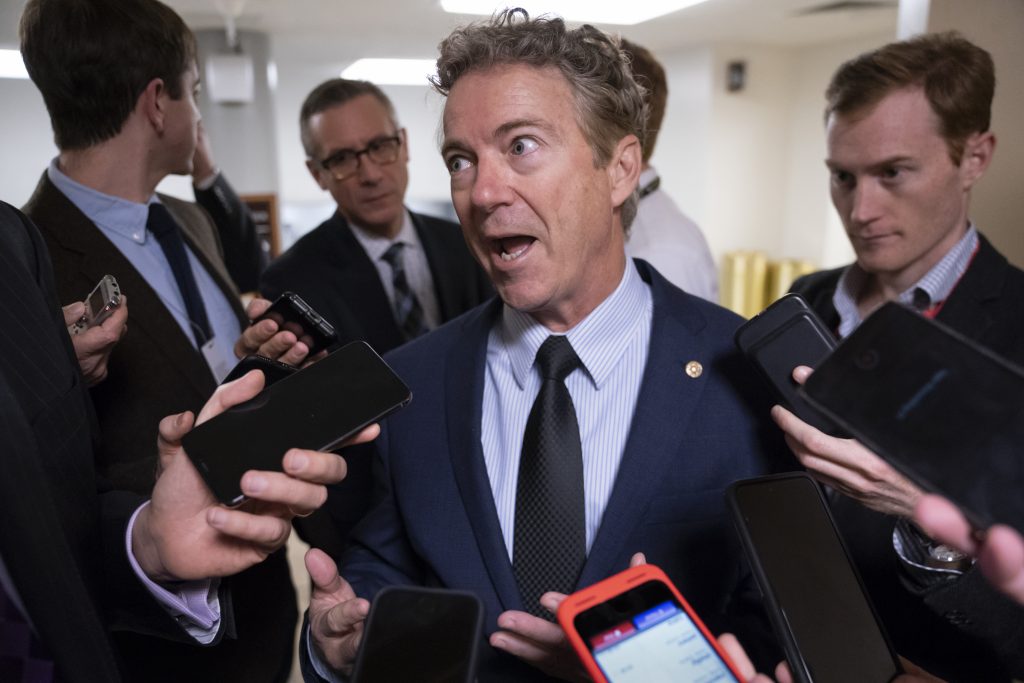 With the impeachment inquiry into President Donald Trump poised to enter a new public phase this week, lawmakers sparred Sunday over the witnesses who will be allowed to testify, with Democrats dismissing GOP efforts to call the anonymous whistleblower and former vice president Joe Biden’s son Hunter.

Democrats and Republicans have crafted dramatically different strategies for controlling the narrative of what happened between President Trump and Ukraine. Democrats are trying to stay narrow and focused, keeping the story simple. Republicans want the opposite – bringing in as many characters and events as possible and arguing that whatever Trump did was no different from business as usual in Washington.

These dueling game plans were in sharp relief Sunday on the morning talk shows.

“This is a very simple, straightforward act. The president broke the law,” Democratic Rep. Jackie Speier of California said on ABC. “He went on a telephone call with the president of Ukraine and … proceeded to ask for an investigation of his rival.” She said, “this is a very strong case of bribery.”

But Republicans do not want to focus on the much-discussed July 25 phone call between Trump and Ukranian President Volodymyr Zelensky, or even on events of recent months. Instead, they are seeking to broaden the investigation to include actions taken years ago by the Bidens.

On NBC, Sen. Rand Paul, R-Ky., argued that “it’s unfair to treat Trump under one standard and Joe Biden under a different standard.” He claimed that Trump’s actions – seeking to use leverage over Ukraine to advance some kind of agenda – have been common among a variety of American elected officials of both parties in recent years.

“I would make the argument that every politician in Washington, other than me, virtually, is trying to manipulate Ukraine to their purposes,” Paul said.

Republicans have sought to minimize Trump’s role in the campaign to pressure Ukraine, and the list of potential witnesses they released Saturday suggests they will continue to do so.

Among those on the list are Hunter Biden, whose father is a leading Democratic candidate to challenge Trump in 2020; Hunter Biden’s business partner Devon Archer; the unnamed whistleblower, whom Trump and some of his allies have campaigned to publicly identify; the researcher Nellie Ohr of Fusion GPS, which commissioned a dossier that linked Russia and Trump; and Alexandra Chalupa, a Ukrainian American who worked with the Democratic National Committee.

House Intelligence Committee Chairman Adam Schiff, D-Calif., said in a statement Saturday that Democrats would evaluate the requests but that the impeachment probe “will not serve … as a vehicle to undertake the same sham investigations” into the Bidens or the 2016 campaign, or to retaliate against the whistleblower.

Several Democrats on Sunday pushed back against their GOP counterparts’ request.

Speier, a member of the House Intelligence Committee, raised the issue of the “great risk associated with (the whistleblower’s) life right now.” She said that it is unnecessary for the individual to appear before the intelligence panel because other witnesses who were actually on Trump’s phone call with Zelensky – which is at the center of the inquiry – will testify.

“The only thing that the whistleblower can say is that he was told by other people about the phone call,” Speier said. “We have the other people coming forward to actually testify. So you have direct evidence, not indirect evidence.”

Speier argued that having Hunter Biden testify would also be “irrelevant” because he “is unrelated to the Ukraine call.” Some of the witnesses Republicans have requested may be allowed, she added, including National Security Council official Tim Morrison and former Ukraine envoy Kurt Volker, both of whom have already testified behind closed doors.

Another Democrat on the Intelligence Committee, Rep. Sean Patrick Maloney of New York, also rejected the call for Hunter Biden to testify.

“He has no knowledge of what the president did or didn’t do here that is the subject of the impeachment hearing,” Maloney said on Fox News.

Some Republicans, meanwhile, focused on the process of the impeachment inquiry rather than on the substance of the allegations against Trump.

Rep. Mac Thornberry, R-Texas, argued on ABC that “there will be a taint to this one-sided, partisan approach to impeachment.”

He said it would be “inappropriate,” but not impeachable, for a president to ask a foreign leader to investigate a political rival, as Trump is alleged to have done. The importance of process, Thornberry maintained, cannot be ignored.

“There’s a reason we let murderers and robbers … go free when their due process rights have been violated,” Thornberry said.

On Fox News, Rep. Will Hurd, R-Texas, said the impeachment inquiry “has been a partisan exercise from the very beginning.” He said Republicans want to hear testimony from Hunter Biden.

“I think we should just turn over every rock and pursue every lead to ultimately get to the truth,” Hurd said.

Other Republicans maintained that Trump sought to hold up much-needed military aid to Ukraine over general concerns about corruption – despite closed-door testimony from witnesses who said the White House had threatened to withdraw the aid unless Kyiv announced investigations for Trump’s political benefit.

“I remain sympathetic with President Trump’s legitimate concerns about the corruption,” Sen. Ron Johnson, R-Wis., said on CNN. “When you’re going to provide hundreds of millions of taxpayer dollars into a system, you want to make sure it isn’t corrupt. … I never heard the president say I want to dig up dirt on 2020 opponents.”