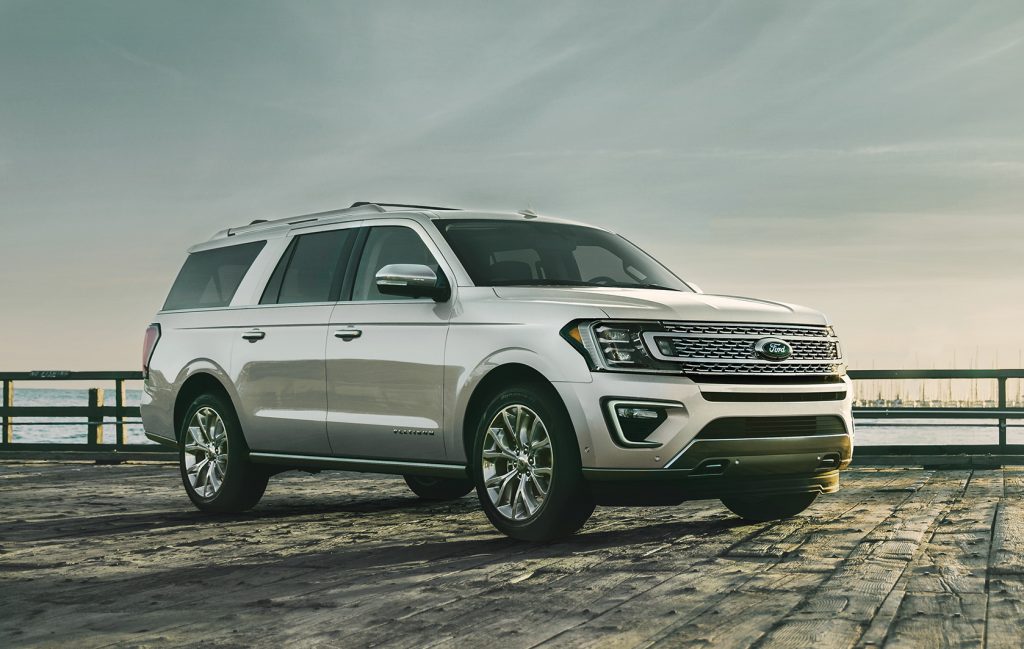 Marketer’s pitch: “Built to stand out.”

Reality: Stealth Edition?!? Stealthy like an elephant. Meet the “Stealthephant.”

What’s new: Coming off a redesign for 2018, the Ford Expedition carries over with just a few enhancements for the 2019 year (and 2020 as well). But it’s still a worthy competitor to the Enclave, Sequoia and Telluride, offering three rows and plenty of space.

Up to speed: The 3.5-liter EcoBoost V-6 powering the Expedition — the only engine choice — produces 375 horsepower and 470 pound-feet of torque. Motor Trend says it hits 60 mph in 6.2 seconds, but it sure feels like trying to navigate a single-family house along the way. The Expedition doesn’t hold a straight line well under duress, starting or stopping.

On the road: I have never had the opportunity to pilot an RV, but I suspect the Expedition is a lot like that. It’s big and hard to keep composed.

A Sport mode would be nice. Though a sporty Expedition seems like an oxymoron, the Sport mode in the Cadillac Escalade makes that large SUV feel like a comfortable driving companion.

But the underpinnings of the Expedition shine through — towing up to a whopping 9,300 pounds when equipped right.

Still, it’s worth wondering why the same Ford that makes the delightfully car-like F150 can’t do something smoother to tame its Winnebago-like Expedition.

Shifty: The 10-speed automatic transmission leaves a bit to be desired as well. First, the dial controller is a little off-putting, and only console buttons change the gears if desired.

Left in automatic mode, the dashboard features a column of numbers 1 to 10, noting which gear you’re in. It’s a neat feature, but also a drawback for Ford, as it made clear just how hard the Expedition was searching for the right gear. I haven’t seen that much hunting since I lived in Clearfield County, Pa., during deer season.

It really made its true nature known on our last day. It had sat for three days, so startup was rough. Then a trip across the Pennsylvania Turnpike was just rough and shifty. Only after a shutdown for some food did it seem to regain its composure as we rolled toward the Garden State. I suspect a couple of software issues plagued the test model.

Driver’s Seat: An Expedition driver will certainly feel like king of the road from way up here, more so than in the Telluride. Unfortunately, seeing around the vehicle can be next to impossible — the outboard mirror has to be canted perfectly or cars in adjoining lanes will disappear at inopportune times, and I have the heart-rate numbers to prove it.

Friends and stuff: We had the opportunity to fill up the Expedition with five of us and our luggage for a trip to Newark to catch a plane to the Midwest.

Rear seat space and access are impressive. The middle-row captain’s chairs make moving around the cabin easy, and the seats offer comfort and adjustment. Rear-seat passengers have almost minivan-level accommodations on the corners, but the middle seat is high and hard. Headroom is a bit of a challenge on top of all the truck components. Even my giant son found the space impressive for a couple of hours. “I think you should buy this,” he said. “It’s so roomy.”

Stow up to 104 cubic feet behind the first row and 20.9 behind the last, although still tight for five people’s luggage for a long trip. Plan on stacking and get in the ready position when opening the liftgate.

Play some tunes: The infotainment center features plenty of touchscreen operation, but much of it is direct and simple. Knobs control volume and tuning, so that helps.

Sound is an A- or so, fairly impressive.

Keeping warm and cool: The seat heaters and coolers are impressive. Heater vents are hard to direct and impossible to block completely.

Fuel economy: Another part to the RV feel of the Expedition would be watching the distance to empty drop precipitously while driving. The Expedition is a guzzler, averaging about 17 mpg in my usual realm of testing, plus one trip down the New Jersey Turnpike.

How it’s built: Consumer Reports gives the Expedition a predicted reliability of 4 out of 5.