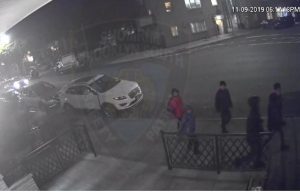 A group of neighborhood youths went on an egging spree on Motzoei Shabbos around Dahill Road in Boro Park, hitting multiple Jewish buildings.

The targets included a shul, a girls’ school, a bus, and multiple residences.

One incident caught on surveillance footage occurred at Khal Bnei Torah Sanz on Dahill Rd, near Cortelyou Rd and 37th St, shortly after Shabbos while mispallelim were still present.

Multiple security cameras captured the group passing the shul and pausing to taunt the people inside. When the shul’s door was opened, they hurled an egg as they made their escape. Shomrim was called and arrived shortly thereafter on the scene. Another location that was targeted nearby was the Belzer girls’ school.

The attacks fit a pattern of harassment that has been plaguing the area in recent weeks, with the perpetrators appearing to originate in the South Asian community that borders Boro Park in the Kensington neighborhood.

Boro Park Shomrim recovered the footage from multiple security cameras documenting the attacks, and the NYPD is currently investigating and searching for the suspects, who possibly face hate crime charges