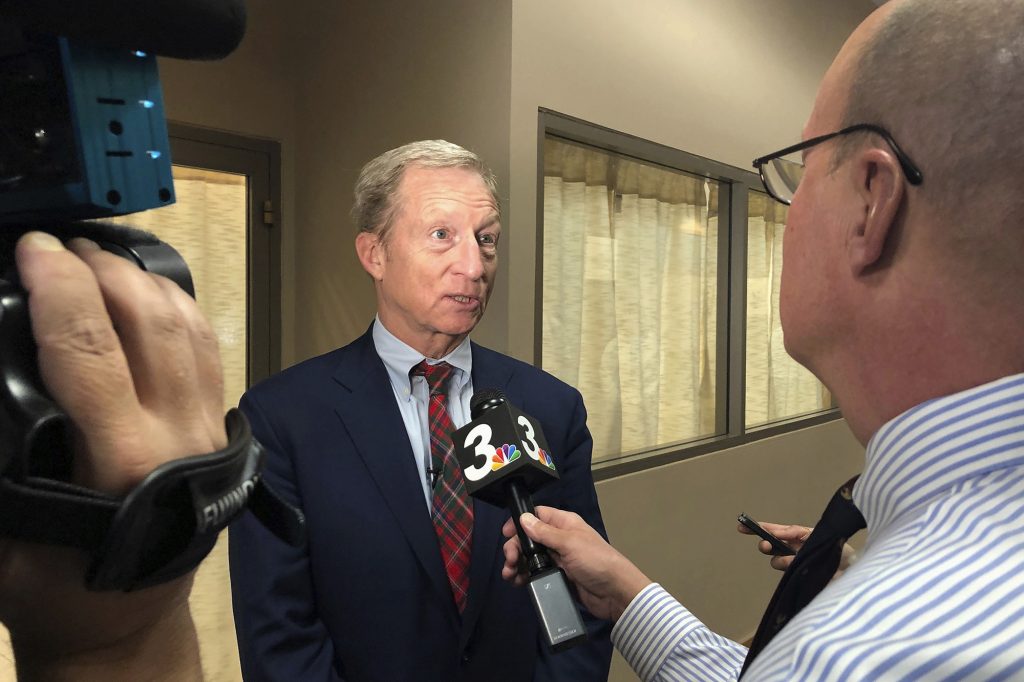 A top aide to Democratic presidential candidate Tom Steyer in Iowa privately offered campaign contributions to local politicians in exchange for endorsing his White House bid, according to multiple people with direct knowledge of the conversations.

The overtures from Pat Murphy, a former state House speaker who is serving as a top adviser on Steyer’s Iowa campaign, aren’t illegal — though payments for endorsements would violate campaign finance laws if not disclosed. There’s no evidence that any Iowans accepted the offer or received contributions from Steyer’s campaign as compensation for their backing.

But the proposals could revive criticism that the billionaire Steyer is trying to buy his way into the White House. Several state lawmakers and political candidates said they were surprised Steyer’s campaign would think he could buy their support.

Tom Courtney, a former Democratic state senator from southeastern Iowa who’s running for reelection to his old seat, told The Associated Press that the financial offer “left a bad taste in my mouth.”

Murphy said concerns about his outreach were the result of a “miscommunication.”

As Steyer met with voters in Bluffton, South Carolina, on Thursday, the first question posed to him was about the AP report. He said that he learned about the allegations while driving to the event and that no payments had gone to officials in Iowa.

“We haven’t given any money to anyone in Iowa, nor are we planning to,” he said. “There’s no way we would ever do that.”

Courtney declined to name Murphy as the Steyer aide who made the offer, but several other local politicians said they received similar propositions, and all confirmed the proposal came from Murphy himself. Most spoke on condition of anonymity to discuss the issue freely. Iowa state Rep. Karin Derry said Murphy didn’t explicitly offer a specific dollar amount, but made it clear Derry would receive financial support if she backed Steyer.

“It was presented more as, he has provided financial support to other down-ballot candidates who’ve endorsed him, and could do the same for you,” she said.

“Tom, I know you’re running for Senate. I’m working for Tom Steyer,” Courtney recalled hearing from the aide. “Now you know how this works. … He said, ‘You help them, and they’ll help you.'”

“I said, ‘It wouldn’t matter if you’re talking monetary, there’s no amount,'” Courtney continued. “I don’t do that kind of thing.”

Alberto Lammers, Steyer’s campaign press secretary, said the candidate hasn’t made any individual contributions to local officials in Iowa and won’t be making any this year. In an email, Lammers said Steyer’s endorsements “are earned because of Tom’s campaign message,” and distanced the candidate from Murphy.

“Our campaign policy is clear that we will not engage in this kind of activity, and anyone who does is not speaking for the campaign or does not know our policy,” Lammers said.

In a separate statement, Murphy said that “as a former legislator, I know how tricky the endorsement process can be for folks in Iowa. It was never my intention to make my former colleagues uncomfortable, and I apologize for any miscommunication on my part.”

The overtures do not appear to have made much of a difference for Steyer. Aside from Murphy’s support, Steyer has received the endorsement of just one Iowan since entering the race in July — former state Rep. Roger Thomas.

Thomas did not respond to phone calls, but in a statement provided by the campaign, he said that he endorsed Steyer “because he’s the outsider who can deliver for Iowans on the issues that matter most: getting corporate corruption out of our politics and putting forth a rural agenda that revitalizes communities across Iowa.”

Thomas’ endorsement was issued in October after the close of the most recent campaign finance reporting period, which ended Sept. 30. The disclosure Steyer filed offers no indication that he directly gave Thomas any money.

Experts say a campaign could violate campaign finance laws if they don’t disclose payments for endorsements.

“It’s legal if you disclose a payment for an endorsement on your campaign finance report,” said Adav Noti, a former Federal Election Commission attorney who now works for the nonpartisan Campaign Legal Center in Washington. But, he added, “It would be unlawful if you don’t disclose it, or you disclose it but try to hide who the recipient is, or try to hide what that purpose was.”

A trio of former Ron Paul aides faced legal trouble in 2016 over similar issues during the 2012 Iowa Republican caucus campaign. Campaign chairman Jesse Benton, campaign manager John Tate and deputy campaign manager Dimitri Kesari were convicted in 2016 of charges related to arranging and concealing payments for then-Iowa state Sen. Kent Sorenson, who switched his support from Michele Bachmann to Paul just six days before the Iowa caucuses. Sorenson served 15 months in jail for his role in the scheme.

It’s unclear whether Murphy could face a similar legal complaint, but the issue could revive scrutiny of how Steyer is deploying his financial resources. The billionaire businessman built his fortune in banking and investment management before turning to politics, and though he’s never held public office, he invested tens of millions of dollars in political activism and electoral politics before launching his presidential bid this year. Before his presidential run, Steyer’s most recent focus was a multimillion-dollar, pro-impeachment campaign, and as the U.S. House takes up the issue, he’s argued he’s put it on the national agenda.

Steyer has largely self-funded his presidential campaign, spending $47.6 million of his own money in the first three months since launching his bid, much of that on online fundraising and advertising. Steyer has qualified for the November debate, but he remains at the back of the pack in early-state and national polls.