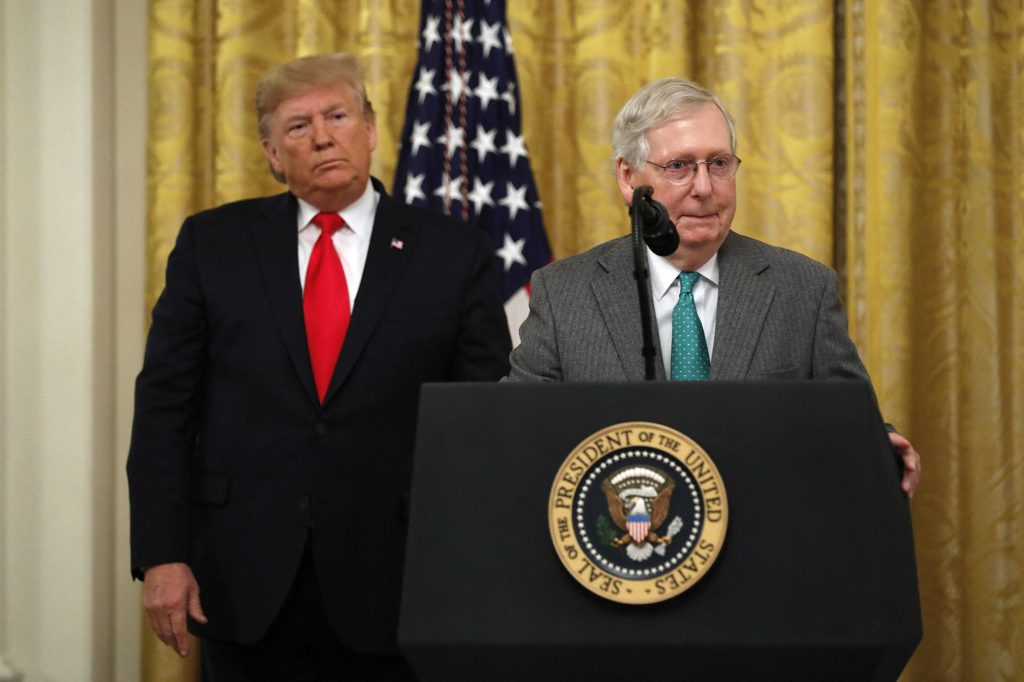 Senate Republicans are beginning to strategize about how they might use an impeachment trial to reshape the narrative in the president’s favor.

President Donald Trump’s strongest allies in the Senate are considering ideas such as calling witnesses that might prove embarrassing to Democrats or trying to time the proceeding to interfere with the campaigning of 2020 candidates, particularly in the run-up to the first presidential contest in Iowa.

If impeachment moves from the Democratic-controlled House to the GOP-controlled Senate, the president’s party will have more control over the process. Many see it as an opportunity to allow the president’s lawyers to make a high-profile case to the public.

Some are speculating that they could call witnesses who could shift focus away from Trump’s alleged misconduct, such as former Vice President Joe Biden’s son Hunter, whom Trump has accused of corrupt dealings in Ukraine.

And the Senate might even have influence on the 2020 contest. Assuming articles of impeachment are passed in the House by the end of the year, a trial held in January would keep the six senators who are vying for the Democratic nomination tied up in Washington instead of out campaigning in Iowa. That could be a boon to other Democrats seeking the nomination, including Biden and South Bend, Ind., Mayor Pete Buttigieg.

“Once it comes over here, it’s in our lap,” said Sen. Kevin Cramer (R-N.D.). “We talk about those things and kind of snicker about it, I suppose: the possibility of it playing out that way, where we’re literally in the middle of voting (in the presidential race and) senators would be stranded here for six days a week.”

All of the senators running for president plan to remain in Washington for any trial, according to the candidates and their campaigns.

Many of the candidates have skipped Senate votes in recent weeks as the presidential contest has picked up steam. But bypassing the third presidential impeachment trial in U.S. history — particularly when many of the candidates were publicly calling for an impeachment inquiry before House Speaker Nancy Pelosi (D-Calif.) — would be noticed and judged within the Beltway.

“I’ll be there,” said Sen. Elizabeth Warren (D-Mass.). “This is a constitutional responsibility. I swore an oath to uphold the Constitution of the United States of America.”

Sen. Kamala Harris (D-Calif.) said “of course” she is concerned that a trial would limit her chance to talk to Iowa voters, but that she would stay in Washington. “I will fulfill my responsibility. There’s no question,” she told reporters recently. “I take it very seriously.”

Clinton’s trial lasted five weeks — a length of time that GOP senators speculate is all but unfathomable in today’s political and news environment.

Any amount of time in Washington could put a significant damper on a campaign, particularly because impeachment is not a central concern of Democratic primary voters. That will be particularly true in Iowa, where voters have grown accustomed to face-to-face contact with candidates.

Republicans’ ability to control the timing of a trial may be limited, however. For example, current Senate rules require it take up articles of impeachment the day after they are forwarded from the House, giving Democrats some influence on the calendar. A trial could be delayed, but that might require Democratic support.

Republicans could simply use their majority to change the rules before the trial begins, though such a move has not been openly discussed.

Current rules and precedents are already not very conducive to a campaign schedule. They require the chamber to conduct the trial six days a week and begin at 1 p.m. each day. Senate Majority Leader Mitch McConnell (R-Ky.) indicated Tuesday that he wants those rules to remain in place. That leaves little time to hop on a flight to Iowa.

Once the trial begins, senators are prohibited from speaking on the Senate floor; they are expected to sit at their desks and write their questions down to be given to the chief justice of the Supreme Court, who would oversee the trial.

Of course, candidates could — and certainly will — do tv hits from the Senate office buildings to highlight their role in the process. So even though they may lose face time with Iowa voters, they’ll be at the center of a national story that is likely to dominate airwaves and headlines.

McConnell has downplayed how much Republicans can control the process, saying that once the trial begins, rulings will be made by Supreme Court Chief Justice John G. Roberts Jr. — not by a majority of the Senate. “This is not something that the majority can kind of micromanage like it can on almost any other issue,” he said Tuesday.

Many of the major decisions will be made before the trial. Senators will have to approve a resolution setting up the rules, including whether witnesses will be allowed and when the trial should begin. During the Clinton impeachment trial, the Republican and Democratic leaders wrote rules that were approved 100 – 0. McConnell suggested Tuesday that at some point, he will sit down with Senate Minority Leader Charles E. Schumer (D-N.Y.) to potentially draw them up.

But given the sharp partisan divide over how the House has conducted the process so far, it is far from certain whether the leaders can match the level of bipartisanship seen in 1999.

The Senate trial will give the president and his lawyers a high-profile opportunity to make their case to the American public. In theory, Republicans will have a chance to call witnesses who could undermine the Democrats’ case. But during Clinton’s impeachment trial, the bipartisan agreement limited witnesses and determined that video of a private deposition of Monica Lewinsky would be aired instead of allowing a House prosecutor to question her in the well of the Senate.

Republicans appear to be staying almost universally supportive of the president, suggesting there is little chance Trump will be convicted.

“If it were today, I don’t think there’s any question,” McConnell said Tuesday. “It would not lead to a removal” of the president.