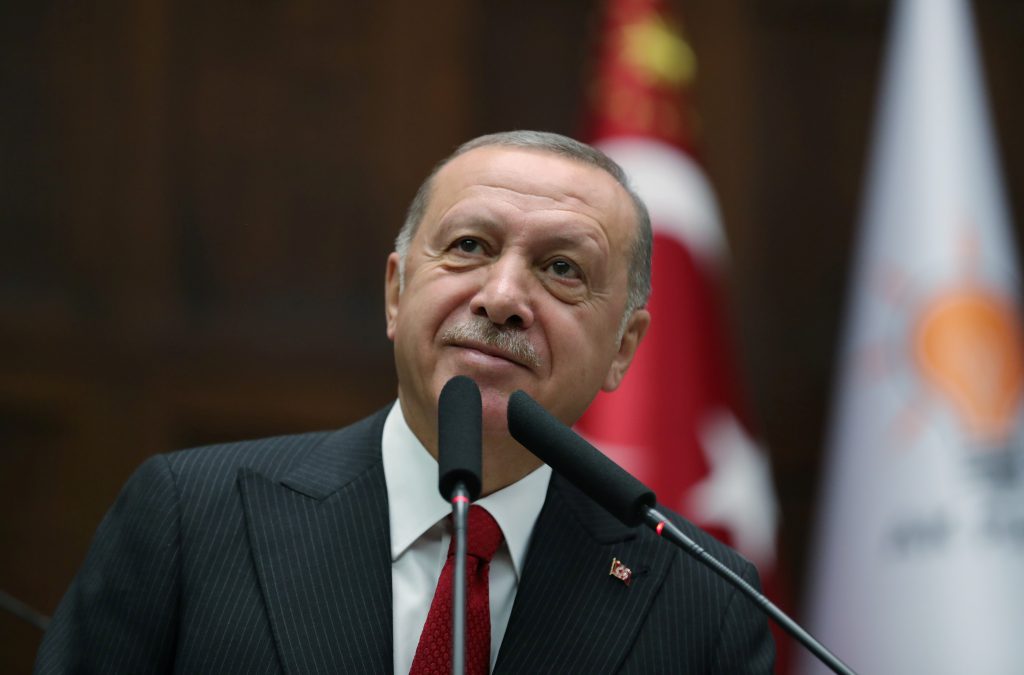 Turkish President Tayyip Erdogan said on Thursday the United States was not fulfilling its pledge to remove a Kurdish militia from a Syrian border region and he will raise the issue when he meets President Donald Trump next week.

A month ago, Turkey launched a cross-border offensive with Syrian rebels against Kurdish YPG fighters. After seizing control of a 75-mile swathe of territory, it reached a deal with the United States to keep them out of that area.

Erdogan is set to discuss implementation of the agreement with Trump in Washington on Nov. 13, after confirming that the visit would go ahead following a phone call between the leaders overnight.

“While we hold these talks, those who promised us that the YPG … would withdraw from here within 120 hours have not achieved this,” he told a news conference, referring to a deadline set in last month’s agreement.

Turkish officials had previously said Erdogan might call off the U.S. visit in protest at U.S. House of Representatives’ votes to recognize mass killings of Armenians a century ago as genocide and to seek sanctions on Turkey.

After the deal with Washington, Ankara also reached an agreement with Moscow under which the YPG was to withdraw to a depth of 30 kilometers along the entirety of the northeastern Syrian border with Turkey.

But Erdogan said this deal had also not been fulfilled, with YPG fighters still in the border strip, adding that he would hold talks with Putin soon on the issue.

A senior U.S. State Department official said late on Wednesday there has been fighting in the area southeast of Syria’s border town of Ras al-Ain. It “is somewhat in dispute” whether the area is covered by the U.S. or Russian deals.

“The YPG and all armed forces have certainly withdrawn from the vast majority of our area,” the official said. “Erdogan is never all that specific in his broadside attacks on us or anybody else.”

Speaking to reporters before a visit to Hungary, Erdogan said clashes in Syria were continuing, with 11 fighters from the Turkey-backed rebel Syrian National Army (SNA) killed on Thursday.

“These terrorists are attacking the SNA, and the SNA is retaliating in kind. There are 11 martyrs from the SNA this morning. Many more were killed on the other side,” he said.

Under the two bilateral deals, Ankara stopped its offensive in return for the withdrawal of the YPG fighters. Turkish and Russian soldiers have so far held two joint patrols near the border to monitor implementation of their agreement.

Ankara considers the YPG a terrorist group because of its ties to terrorists who have fought an insurgency in southeast Turkey since 1984. U.S. support for the YPG, which was a main ally in the fight against Islamic State, has infuriated Turkey.

Ankara began its offensive against the YPG after Trump announced an abrupt withdrawal of 1,000 U.S. troops from northern Syria in early October. The U.S. president has since said that some troops will continue to operate there.

Late on Wednesday, the commander of the YPG-led Syrian Democratic Forces said the group was resuming work with the U.S.-led coalition against Islamic State in Syria.

“As a result of a series of meetings with Coalition leaders, SDF is resuming its joint program of work with the Coalition to combat ISIS and securing the infrastructure of North East Syria,” Mazloum Kobani wrote on social media.

Turkish sources say Trump and Erdogan have a strong bond despite anger in Congress over Turkey‘s Syria offensive and its purchase of Russian air defenses, and despite what Ankara sees as the U.S. president’s own erratic pronouncements.

Turkey has already been suspended from the F-35 fighter jet program in which it was both joint producer and customer, and the offensive it launched against Kurdish forces in northeast Syria on Oct. 9 set the stage for further U.S. retaliation.

Unal Cevikoz, deputy chair of Turkey‘s main opposition Republican People’s Party (CHP), told Reuters that Erdogan will likely ask Trump to disarm the YPG forces and ensure they do not return to the border region.

“There is not a full harmony between the approaches of the United States and Turkey in the Syrian quagmire,” he said.