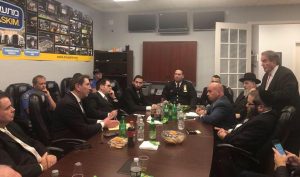 Leaders of the rattled community strongly expressed residents’ alarm, and their concerns over whether the NYPD was generally devoting sufficient manpower to the neighborhood, after the latest in a record rise of anti-Semitic incidents in the city.

Since Friday night’s incident, the Department has increased its presence in the neighborhood, and at Wednesday’s meeting, the police officials assured this would continue, particularly on Friday nights.

“The main thing is,” one of the attendees said, “that we got a promise of a lot more police on the street, more undercover cops, police will go around with the lights flashing. There will be a lot of visibility on Friday until late at night.”

Mayor Bill de Blasio had condemned the assaults on Twitter Wednesday morning, saying that “anti-Semitism has no place in this city” and that he has “directed the NYPD to deploy additional resources in the community throughout the weekend.”

Boro Park Shomrim tweeted Tuesday that by examining security-camera footage, it had obtained, and provided the NYPD Hate Crimes task force with, the license-plate number of the vehicle used by the perpetrators Friday night.

Earlier Wednesday, at the monthly press conference by de Blasio and top NYPD officials to report crime statistics, incoming commissioner and current Chief of Detectives Dermot Shea said the perpetrators Friday night appeared to be “in the age range of probably 15 to 20 years of age” and that “we had some similar incidents about a month ago and we’re looking to see if that could have any relation.” Shea went on to say that “the Hate Crimes Task Force has been plugged in from the start and I think as the investigation proceeds – it’s already moving very rapidly – we should have more to say on hopefully some arrests in a short time.”

Around 80 percent of the anti-Semitic hate crimes are on property, the vast majority of which are the scrawling of swastikas.