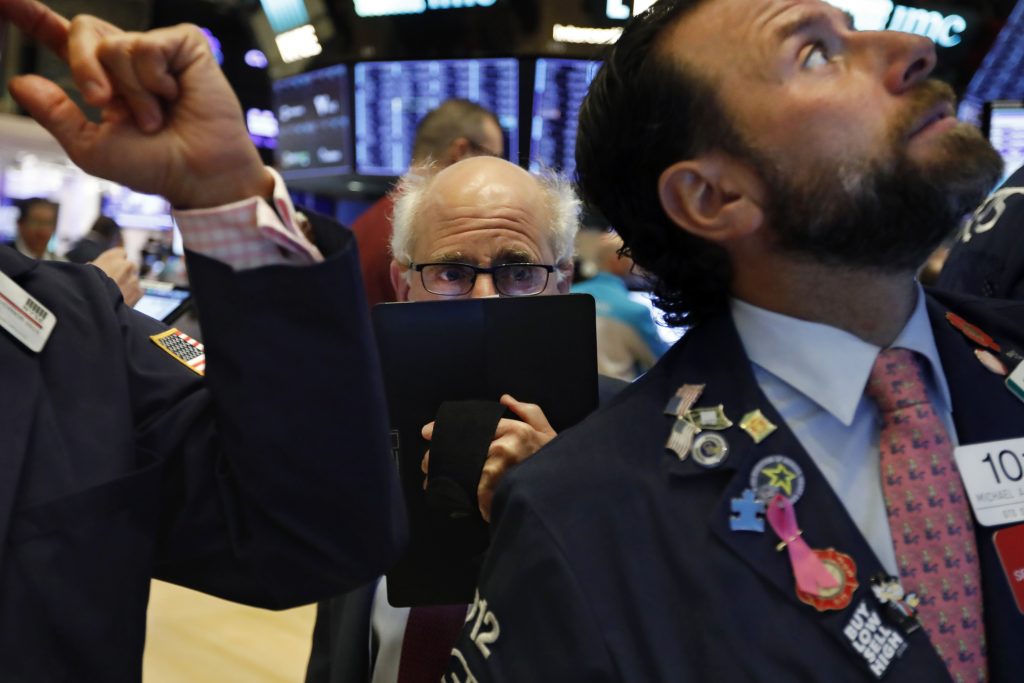 It’s the market that continues mostly upward, even though there’s still plenty to worry about.

The Dow Jones Industrial Average and the Nasdaq closed at record highs yet again on Tuesday, and the S&P 500 closed barely below the all-time high it reached a day earlier.

The gains in recent weeks have been driven by company earnings that haven’t been nearly as terrible as Wall Street was expecting, interest rate cuts, hopes for a trade truce and a steadily growing economy. In all, the S&P 500 is up 22.7% so far this year, putting it on pace for its best year since 2013.

The upbeat mood marks a pivot from the summer, when worries about trade, Britain’s potentially messy exit from the European Union and the slowing global economy loomed over the market.

Here’s a closer look at the factors that have been sending the U.S. stock market to record highs this fall.

Wall Street got through the bulk of third-quarter earnings season last week, and the results were much better than what investors had been anticipating.

As of Friday, 71% of the members of the S&P 500 index have reported their results, and 76% of them have reported better-than-forecast results, according to FactSet. Also, 61% have reported higher than expected sales, which is important in the wake of concerns about an economic slowdown and the U.S.-China trade war.

This doesn’t mean earnings have been stellar. Expectations were low this quarter, and on a whole, profits in the S&P 500 are down 2.7% from a year ago, according to FactSet. But since companies are beating investors’ mediocre expectations, it’s provided the market with a base on which to rally upon.

“Of course, any decline is not good news,” said Brad McMillan, chief investment officer for Commonwealth Financial Network, in a note to investors. “But the fact that it is smaller than expected is positive—and earnings are expected to resume growth in the fourth quarter.”

A DURABLE US ECONOMY

The U.S. economy has repeatedly defied fears of a recession, which had resurfaced in late summer and early fall as trade tensions escalated. Reports on jobs, growth and consumer confidence in the past couple of weeks have pointed to an economy that is overcoming global threats and expanding for a record-long 11th straight year.

Last week, the government estimated that employers added 128,000 jobs in October. It was a modest gain, but the figure was depressed by the temporary loss of about 50,000 striking GM workers and the subtraction of 20,000 short-term Census jobs. Excluding those drags, the job gain would have been much higher. The government also revised up its estimate of job growth for August and September.

Overall, the data suggested that most employers have looked past risks from a global slowdown and the U.S.-China trade war, threats that had caused much concern just a couple of months earlier. Over time, increased hiring tends to fuel consumer spending, which, in turn, could help lift corporate earnings and share prices.

The government also said last week that the nation’s gross domestic product, the broadest gauge of economic growth, expanded at a 1.9% annual rate in the July-September quarter. Though sluggish, that figure was roughly in line with the average annual growth throughout the expansion that began in 2009. It suggested that the economy remains resilient.

And on Tuesday, an index that measures growth in the economy’s vast service sector — made up of industries ranging from restaurants to banking to health care — rose in October to show solid expansion after having touched a three-year low in September.

One of the biggest drags on business confidence and investment has been the uncertainty and higher costs injected by the Trump administration’s trade war with China. The administration has imposed tariffs on roughly three-quarters of China’s exports, including toys, electronics and other consumer goods. Beijing has retaliated with tariffs on most U.S. exports to China.

Yet since early October, a thaw has developed. The two sides have moved toward a potential first-stage deal that probably would lead to the cancellation of further tariffs that President Donald Trump has threatened to impose and possibly to the lifting of some existing tariffs. Optimism has risen that an initial agreement might be reached this month.

Another source of uncertainty has been the prospect of a disorderly exit by the United Kingdom from the European Union. Yet that concern was postponed after the EU agreed last month to delay a deadline for the U.K.’s departure from Oct. 31 to Jan. 31 amid signs that a Brexit agreement might be reached.

With these uncertainties fading if not lifting, it’s possible that U.S. companies will soon resume investing in machinery, computers and other equipment to expand their businesses. That would provide another source of growth for the U.S. economy, in addition to the consumer spending that has nearly alone driven the expansion for the past six months.

Federal Reserve Chairman Jerome Powell cited the easing global tensions as a factor in why the Fed will likely keep interest rates unchanged when it next meets in December after three rate cuts this year.

Those reductions in the benchmark short-term interest rate the Fed controls have also contributed to rising share prices.

The Fed’s rate cuts have helped keep longer-term rates low. The yield on the 10-year Treasury is now just 1.9%, down from 3.2% nearly a year ago.

With the 10-year yield barely above the 1.7% inflation rate, many investors feel compelled to seek out higher returns in the stock market, thereby inflating share prices to levels that some strategists see as worrisome. Investors are currently paying around $18.90 per $1 of future earnings in the S&P 500, something known as a price-to-earnings ratio. That number has been around $17 per $1 of future earnings over the past five years.

And while Powell hinted that the Fed will likely stop cutting rates, he also made clear that rate hikes aren’t likely in the foreseeable future. That would mean that Treasury yields will remain low.