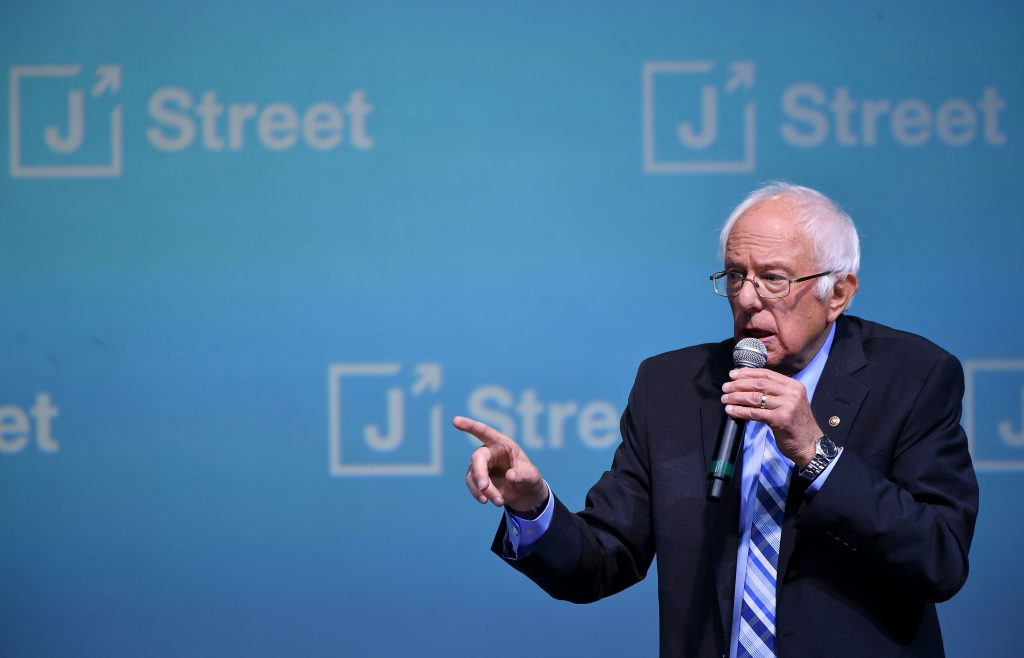 IN a wave of presidential endorsements, the third member of the so called “squad” cried uncle last week and threw her support behind Democratic contender Bernie Sanders. Representative Rashida Tlaib endorsed the socialist Jewish candidate, gushing, “Amo Bernie is what I like to call him … ‘Amo’ means ‘Uncle’ in Arabic.” The endorsement, following similar ones from Representatives Ilhan Omar and Alexandria Ocasio-Cortez, was announced at the same time Sanders cried foul about Israel and trashed the Jewish state at the J Street Conference. Coincidence? I think not.

Jew-haters on the Democratic left have been steadily joining the Sanders campaign. In September, Sanders chose Linda Sarsour as an official campaign surrogate. Ousted from the Women’s March because of charges of anti-Semitism, BDS supporter Sarsour was an obvious choice for a candidate who appointed Faiz Shakir as campaign manager and Matthew Duss as foreign-policy adviser, two individuals with a history of anti-Semitic rhetoric and anti-Israel advocacy.

What is becoming even more obvious, however, is the intent of anti-Semitic Democrats to use the lone Jewish candidate as cover for their anti-Semitism and the willingness of Sanders to play the part. Sanders has been one of the most vocal defenders of these haters and is now reaping his rewards. Regarding Omar, Faiz Shakir acknowledged, “At every turn, it has been Bernie Sanders who immediately leapt to [Omar’s] defense publicly and was often, I think, the first to do so.” Sanders similarly shielded Tlaib back in May with his tweet, “Stop your ugly attacks against Muslim women in Congress.”

But it seems that the Jew-bashers supporting Sanders are reaping exponentially higher rewards. When asked about endorsements from pro-BDS members of Congress like Tlaib at the J Street Conference, Sanders alluded to the partisan smokescreen by replying, “Being Jewish may be helpful in that regard. It will be hard for anybody to call me, whose father’s family was wiped out by Hitler, an anti-Semite.” And by extension, just as hard to label any of his endorsers an anti-Semite. Take Sarsour, who happily harped about being “so proud … to make history and elect the first Jewish American president.”

What is particularly dangerous about this charade is the very success of the man himself. Despite his age and recent heart attack, Sanders attracts the largest followings and has surged to the top of the polls in New Hampshire. This cultural Jew, fond of citing his kibbutz stint in Israel, spearheaded the Democratic Party’s shift to the left and is largely responsible for mainstreaming its radical platform. Sanders’ socialist agenda in the last election, including Medicare for All, has now become the norm. 2019 is the new 2016. And Democratic contenders, having co-opted his trailblazing concepts, no longer debate the merits of such policies but rather their implementation.

But Sanders has become both the chief architect and the useful idiot of his Soviet-style politics. While, thankfully, America seems unready to embrace the socialism of an almost octogenarian Jew, his party is ready to use him to its own advantage. And nowhere is that more apparent than in his very identity as a Jew.

The Vermont senator’s long history of anti-Israel positions in Congress runs in tandem with his socialist positions. And he is selling out his religion to eager buyers in his party, keen to adopt his version as the new gold standard. As a pioneer in the sphere of socialized medicine and environmentalism, he is now a pioneer in the sphere of U.S.-Israel relations. And his past performance should be an alarming guarantee of future results.

The threat of Sanders is his poster-boy appeal. His power lies in radicalizing his party’s anti-Israel position and enabling party members to piggyback on his Jewish credentials. The pressure on House Speaker Pelosi and Senate Minority Leader Schumer should not be underestimated. After surrendering on impeachment to Democratic leftists, Pelosi might cave again after the tepid response she and Schumer received calling for bipartisan support for Israel at the J Street Conference.

In contrast, Sanders’ remarks earned former Ambassador Nikki Haley’s condemnation: “Just when you thought Bernie Sanders couldn’t get any more radical, he outdid himself. … He wants to take money we give to Israel to defend itself from terrorists, and give it to Gaza, which is run by terrorists?? Unreal. Why isn’t every other Dem [presidential] candidate saying he’s wrong?”

Well, duh. As the only candidate positioned to declare, “I’m very proud to be Jewish and look forward to being the first Jewish president,” who are the others to be more Catholic than the pope? It’s proving providential for the growing segment of Jew-haters in the Democratic Party to endorse a self-hating Jew. And the high-profile endorsements Sanders is racking up extend beyond political tit-for-tat — he offers them the ultimate blind for their anti-Jewish sentiments.

As enemies of the Jews continue to champion Sanders, avidly seizing on the “some of my best friends are Jewish” alibi, it is incumbent upon everyone within and without the Democratic Party to denounce him.

And strip the useful idiot of his usefulness.