The Dark Secret of Jewish Homelessness 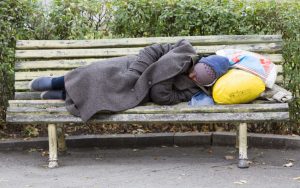 As the title of this week’s Hamodia Prime cover story aptly states, they are hidden in plain sight. Some of them sit on street corners or walk through subway cars collecting small change. Others sleep in cardboard boxes in dark alleyways or in crime-infested government shelters. For the most part, they are all but invisible to the masses who pass them every day. They include men and women, young children and the elderly. Each has their own story to tell of a how they ended up without a roof to call their own, yet one generic term — “the homeless” describes them all. They are located throughout the United States, as well as in parts of Europe and in Israel.

Contrary to what is often assumed, experts believe that a majority of the homeless do not fall into the category of people with mental illness, although up to one-quarter of them are emotionally unwell. There are many possible reasons why they have no place to call home, including a family breakup, a severe personal crisis, or because they are victims of domestic violence. Some of these individuals once held regular jobs and were self-supporting before losing everything and ending up on the streets; others were never able to break out of a cycle of poverty that has accompanied them since childhood.

In a particularly heartbreaking example of the crisis, this week’s issue tells the true story of a Mrs. Schwartz* — a friendly, intelligent, creative individual in her mid-40s who has suffered with mental illness for many years. From the outside, she and her family appeared to be ordinary members of the community — davening in local shuls and sending their children to typical yeshivos and Bais Yaakovs.

On Erev Yom Kippur, with no other housing alternatives, Mrs. Schwartz ended up in a city-run shelter in East New York. According to a close friend who shared this painful saga with Hamodia, not until Mrs. Schwartz got there did she realize how horrible it was. Frightening people were around her at all times and she actually had to sleep on top of her possessions to prevent them from being stolen.

All this proved to be too much for her; a few days later, she attempted to take her own life, swallowing all the medication she had in her possession. Baruch Hashem, she survived the overdose and was brought to a nearby hospital. She was subsequently admitted to a psychiatric facility in Westchester, suffering from severe trauma and post-traumatic stress disorder. Yet as this article goes to print, she remains there, with no place to go when she is discharged.

While there are noted Jewish organizations and dedicated individuals who try to help people like Mrs. Schwartz, those efforts are hampered by limited resources and an acute lack of housing options. It is our hope that this article will serve as a clarion call and an impetus for concrete action.

In many of the shtetlach of prewar Europe, poverty was rampant. Yet the typical community still managed to provide a “hekdesh” that housed the homeless and travelers too poor to pay for a room at the inn. It may have been a dilapidated hovel, but it had four walls, a roof and a bed — a far better alternative than being on the streets. Who would have imagined that in the United States — the “goldene medinah” — a Torah-observant woman would find herself in a dangerous, crime-infested government shelter in 2019?

Together, hopefully, we can make a difference and do our utmost that every Jewish soul should have a safe place to call home.

*Name has been changed.