Harav Yaakov Halevi Lipschutz, zt”l, of Monsey, New York, was niftar Friday morning at age 87. Rav Lipshutz, a talmid chacham of stature, led a long life in which he learned under gedolim of previous generations in Bais Medrash Elyon, served as a Rav in Monsey, and was involved in the field of kashrus for many years.

Rav Yaakov was a great-grandson of Harav Yaakov Halevi Lipschutz, zt”l, who was the famed secretary and right hand of the Kovna Rav, Harav Yitzchak Elchonon Spector, zt”l. Rav Yaakov wrote extensively in the Jewish print media of his time, where he defended authentic Yiddishkeit from its detractors. In addition, he was active in many clandestine missions through which he safeguarded and shielded the Yidden of Lithuania and beyond from the nefarious plans of their enemies. His two-volume memoir, Sefer Zichron Yaakov, printed in 1924 and 1927, records many of the events in the Jewish communities of Europe from 5520/1780 through 5620/1880.

During Rav Binyomin’s lifetime, he published his sefer, titled Talmud Mifurash, on the entire Maseches Brachos.

Rav Binyomin’s son, Harav Yaakov, was a talmid of Yeshiva Torah Vodaas and Bais Medrash Elyon, where he joined an elite group of talmidim who set a high bar for limud haTorah in America. Rabbi Nosson Scherman, a fellow talmid of Bais Medrash Elyon and a colleague of Rav Yaakov, recalled a time when they learned side-by-side in the rarified atmosphere of the yeshivah.

“We all learned together, Chassidim and Litvishe, as we were all one chevrah,” Rabbi Scherman told Hamodia. “On one side, there was Harav Shmelke Taubenfeld, zt”l, a genuine Chassid, and at the other end was Rav Yaakov, a Litvak. Yet we all learned together as a united group.”

Rav Yaakov married Itta Brocha Levin, a daughter of Harav Leizer Levin, zt”l, head of the Vaad Harabbonim of Detroit and a talmid of the Chofetz Chaim. Through his marriage, he became the brother in law of Harav Avraham Chaim Levin, zt”l, and, ybl”c, Harav Chaim Dov Keller, shlita, the Roshei Yeshivah of Telz-Chicago.

After his marriage he settled in Monsey, where he served for many years as Rav of Khal Bais Yosef, as well as a Rebbi in Yeshiva Samson Raphael Hirsch (Breuer’s). After the passing of Rebbetzin Itta Brocha, Rav Lipschutz married Rebbetzin Tzipora (Lubin).

Rav Lipschutz was a tremendous talmid chacham and baal machshavah. Many of his original Torah thoughts on Chamishah Chumshei Torah are recorded in his Sefer Ikvei Binyomin, a two-volume set which was published in 5765/2005. He was a powerful orator who inspired others with his insightful Torah thoughts, and was known for his poetry-like delivery. 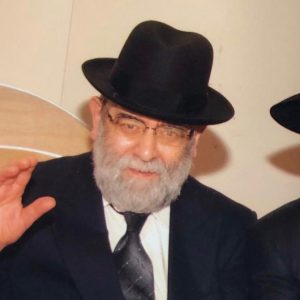 Rav Lipschutz carried the responsibility of his rabbanus in the tradition of the Litvishe Rabbanim of old, maintaining this mesorah with great distinction. He conveyed his great satisfaction with his accomplishments as he perpetuated the precious legacy of Lita and its Rabbanim from whom he descended. His passing leaves the generation severed from this precious link to the illustrious past.

Rav Lipschutz was a pioneer of American kashrus certification. He headed the Orthodox Union Kashrus Division, and later founded National Kashruth, his own kosher supervision organization. In 1998, ArtScroll published his groundbreaking book, “Kashruth: A Comprehensive Reference to the Principles of Kosher,” one of the first books of this genre, which paved the way for many subsequent books on this and similar topics.

The levayah took place on Sunday afternoon at Yeshiva Shaarei Torah in Suffern, New York, with kevurah in Monsey as well.