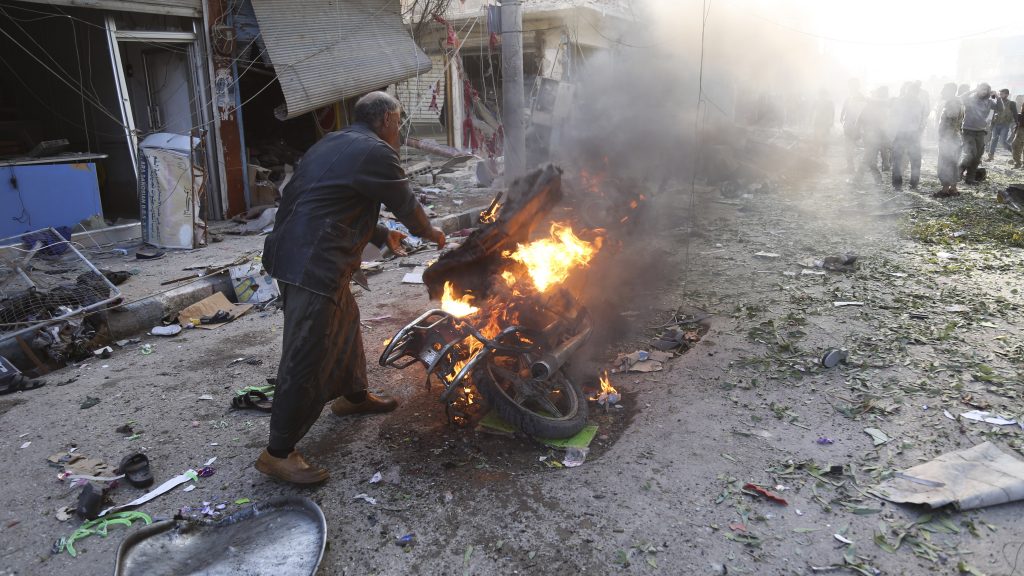 A car bomb exploded in a northern Syrian town along the border with Turkey on Saturday, killing 13 people, Turkey’s Defense Ministry said.

The ministry said about 20 others were wounded when the bomb exploded in central Tal Abyad, which was captured last month by Turkey-backed opposition gunmen from Kurdish-led fighters.

The ministry blamed Syrian Kurdish fighters for the attack, saying it harshly condemns it, and called on the international community to take a stance against this “cruel terror organization.”

A spokesman for the main Kurdish-led force in Syria, Mustafa Bali, blamed Turkey for the blast, saying Turkey and the Syrian fighters it backs “are now creating chaos” in Tal Abyad to displace the Kurds who live in the town.

“Turkey is responsible for civilian casualties in the region it controls,” Bali tweeted.

Turkey last month invaded northeastern Syria to push out Syrian Kurdish fighters, whom it considers terrorists for their links to a Kurdish insurgency inside Turkey.

Earlier on Saturday, the Kurdish-led Syrian Democratic Forces said Christian fighters will now oversee security in a northern Syrian region that has witnessed fighting between Turkey-backed troops and Kurdish-led militiamen.

The SDF said the deployment will take place in villages close to the town of Tal Tamr in the Khabur river region. That area is home to Syria’s dwindling Christian Syriac and Assyrian communities.

The SDF said it’s deploying the Syriac Military Council and Assyrian fighters in the Khabur river region. Both groups are part of the SDF.

The announcement came a day after Turkey and Russia launched joint patrols in northeastern Syria, under a deal that halted a Turkish offensive against Syrian Kurdish fighters who were forced to withdraw from the border area following Ankara’s incursion.

Though the truce has mostly held, it has been marred by accusations of violations from both sides and occasional clashes. Turkish President Recep Tayyip Erdogan has threatened to resume the offensive if deemed necessary.

But the U.S. had partnered with the Syrian Kurdish fighters, their top allies in the war against the Islamic State group. The relationship has strained ties between Washington and Ankara, who are NATO allies.

After an abrupt and widely criticized decision by President Donald Trump to withdraw American troops from this part of Syria, the Kurdish forces approached the Syrian government and Russia for protection. Syrian government troops and Russian military police subsequently moved into areas along the border.

The Syrian Observatory for Human Rights, an opposition war monitor, reported that U.S. troops were setting up a post near the northern border city of Qamishli that is part of the Russia-Turkey agreement. The Observatory said an American force arrived Saturday at the village of Himo west of Qamishli to set up the post.

Christians made up about 10% of Syria’s pre-war population of 23 million, who co-existed with the Muslim majority and enjoyed freedom of worship under President Bashar Assad’s government. Most have left for Europe over the past 20 years, with their flight significantly gathering speed since the start of the current conflict.