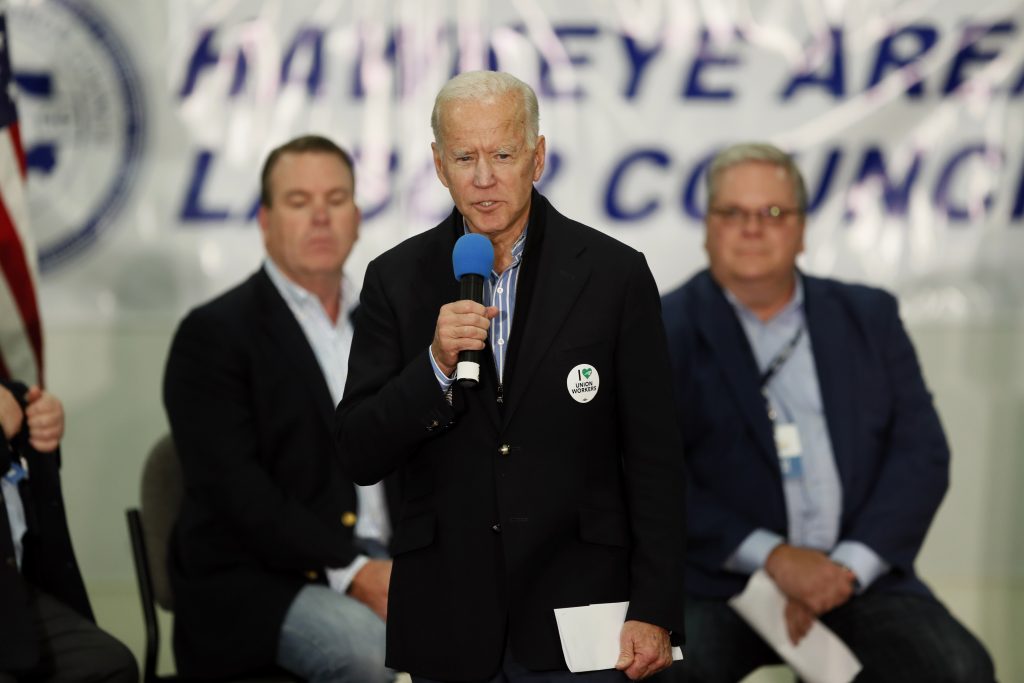 Bristling at Elizabeth Warren’s suggestions that he’s a milquetoast moderate with small ideas, presidential candidate Joe Biden countered Saturday that he offers a “bold” vision for the country and warned that Democratic primary voters should not get distracted by the party’s increasingly tense battle over ideological labels.

It was a departure from Biden’s usual campaign speech and signaled perhaps a new phase of Democrats’ search for a nominee to take on President Donald Trump, with Warren, the leading progressive candidate, and Biden, the top choice for most moderates and establishment liberals, ratcheting up the intensity three months ahead of the Iowa caucuses.

“The vision I have for this country, there’s nothing small about it. It is like going to the moon,” Biden told supporters in Des Moines, as he hit the high points of a policy slate that would increase the federal government’s spending and scope on everything from health care to the climate crisis.

Without naming Warren, the former vice president said his ideas — such as a “public option” to compete alongside private health insurance, as opposed to Warren’s “Medicare-for-All” plan run altogether by the government — actually set the progressive standard in 2020 for a simple reason: They’re more achievable.

“I’m not promising anything crazy,” Biden said. “But it’s a vision — a vision of how we can get things done.”

With reporters afterward, Biden zeroed in on Warren’s estimated $20 trillion price tag for the first decade of single-payer insurance. “Getting that plan through, even in a Democratic Congress,” Biden predicted, “would be difficult.”

“Anyone who comes on this stage and tells you to dream small and give up early is not going to lead our party to victory,” the Massachusetts senator told thousands of voters sporting t-shirts and waving signs as their preferred candidates took turns on center stage at a downtown Des Moines arena Friday night.

Even if “some people in our party don’t want to admit it,” Warren argued, the nation is in “a time of crisis” not just because of Trump’s divisiveness but more so because of an economic and political system rigged against the working class. “If the most we can promise is ‘business as usual’ after Donald Trump,” Warren said, “then Democrats will lose.”

The senator doubled-down Saturday, insisting in Vinson, Iowa, that sweeping plans are good politics and perhaps necessary to upend Trump. “We need big ideas to inspire people, to get them to turn out for the caucuses, to turn out and vote,” Warren said.

At the least, Biden’s reaction suggests frustration over Warren’s apparent momentum, even as he and his aides maintain that his philosophical approach will be successful among both Democratic primary voters and the general electorate.

Biden’s proposals, to be clear, put him to the left of recent Democratic nominees, including Hillary Clinton in 2016. But on most points, he falls short of the proposals on the left flank that Warren and her fellow progressive, Sen. Bernie Sanders, have set.

Rather than obliterate private insurance, Biden touts a government plan to compete alongside private firms. Rather than government covering all four-year college tuition, Biden pushes two years a taxpayer-paid tuition. On climate, he backs most long-term goals of the left’s “Green New Deal,” but on a longer timeline and with an initially less aggressive crackdown on the fossil fuel industry.

The difference in his proposals, Biden argued: “I tell you straight up how we’re going to pay for it and how much it’s going to cost and how it’s going to get done.”

The dynamics Biden faces were crystallized as young climate activists interrupted him and chided him for not doing enough to take on the oil and gas industry. “Let her speak,” the candidate said as his supporters tried to drown out one of the activists.

“If you’ll notice, they left before I answered her question,” he said. “This is what is going on that’s wrong with our party right now. Everything is taken in contexts that are not accurate.”

As his voice calmed, he sought again to widen his appeal.

“The way we win is we unify, we come together as Democrats,” he said. “We all have basically the same hopes and dreams. The question is, practically, how we get there. But it’s not a lack of vision.”