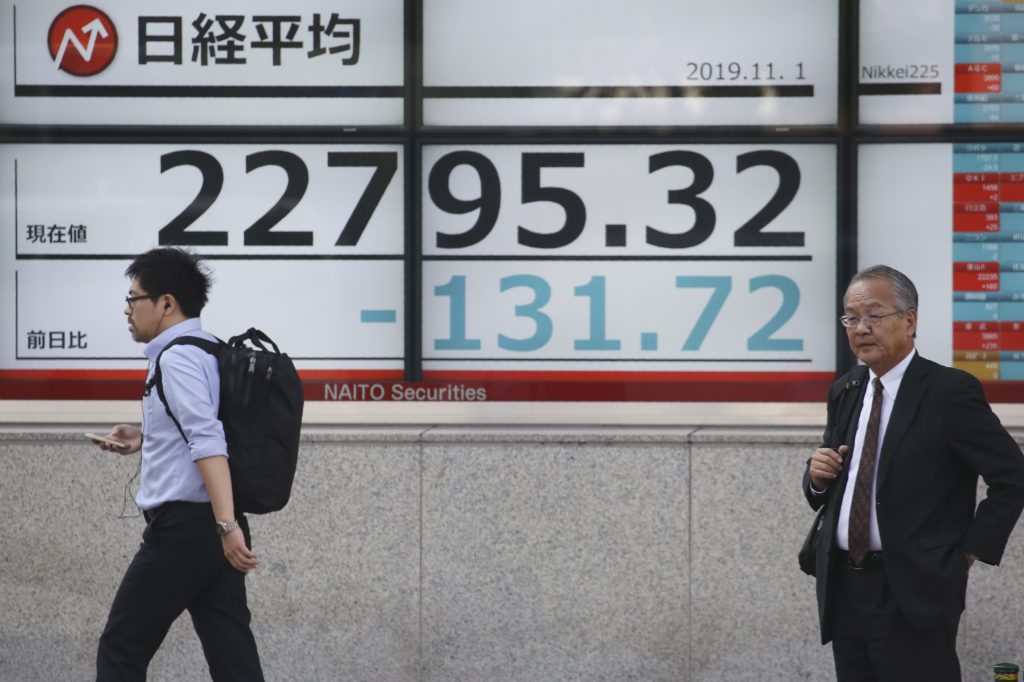 Asian shares were mixed on Friday after investors were spooked by a report that cast doubt on the prospects of a long-term U.S-China trade deal.

The Jibun Bank Japan Manufacturing purchasing managers index hit 48.4 on a scale where 50 shows activity contracting. That was down from 48.9 in September.

“Worrying signs for Japanese manufacturers appeared at the start of the fourth quarter, with PMI data showing conditions deteriorating at the sharpest rate for almost three and a half years,” Joe Hayes of IHS Markit said in a commentary.

“Even more concerning was the fact that new orders, a key forward-looking component of the survey, was the primary reason underpinning this marked decline,” he said.

Shares also fell in Bangkok, Jakarta and Singapore but rose in Taiwan.

Stocks closed broadly lower on Wall Street following a report that raised concerns about the prospects of a comprehensive trade deal between Washington and Beijing.

The Bloomberg report, citing unnamed sources, suggested Chinese officials are doubtful that they will be able to reach a comprehensive, long-term trade deal with the U.S.

That overshadowed remarks by President Donald Trump, who touted Thursday that both sides are working on finding a location to sign “phase one” of the trade deal.

“It’s mainly the concerns about whether there will be some kind of trade deal with China, both the first round and the bigger agreement that, obviously, appears further away,” said Kate Warne, chief investment strategist at Edward Jones. “When there’s good news on trade negotiations, stocks tend to move up, and when there’s bad news or concerns, stocks tend to sell off.”

Despite the sell-off, the benchmark index closed out October with its second straight monthly gain as an easing of trade tensions and surprisingly good corporate earnings gave investors more confidence.

The world’s two biggest economies have wrangled for more than 15 months over U.S. allegations that China steals technology, forces businesses to hand over trade secrets and unfairly subsidizes its technology companies in an aggressive drive to supplant American technological dominance.

They have imposed tariffs on hundreds of billions of dollars’ worth of each other’s goods in a trade fight that has slowed global economic growth.

Negotiators from both countries are trying to settle details of the phase one deal, which sidesteps some of the biggest issues dividing the countries.

“You have the Chinese saying, ‘Gee, they’re not sure there’s a possibility for a long-term negotiation here,’ which is just another reminder that there are big issues still on the table,” said Paul Christopher, head of global market strategy for Wells Fargo Investment Institute. “A phase one deal is not really much of a deal at all.”

Investors have been assessing a steady flow of earnings and economic reports this week. They will get another batch of economic data Friday with the government’s release of October employment data, though a 40-day strike against General Motors is expected to dampen the jobs snapshot.

Benchmark crude oil gained 21 cents to $54.39 per barrel in electronic trading on the New York Mercantile Exchange. It fell 88 cents to settle at $54.18 a barrel on Thursday.