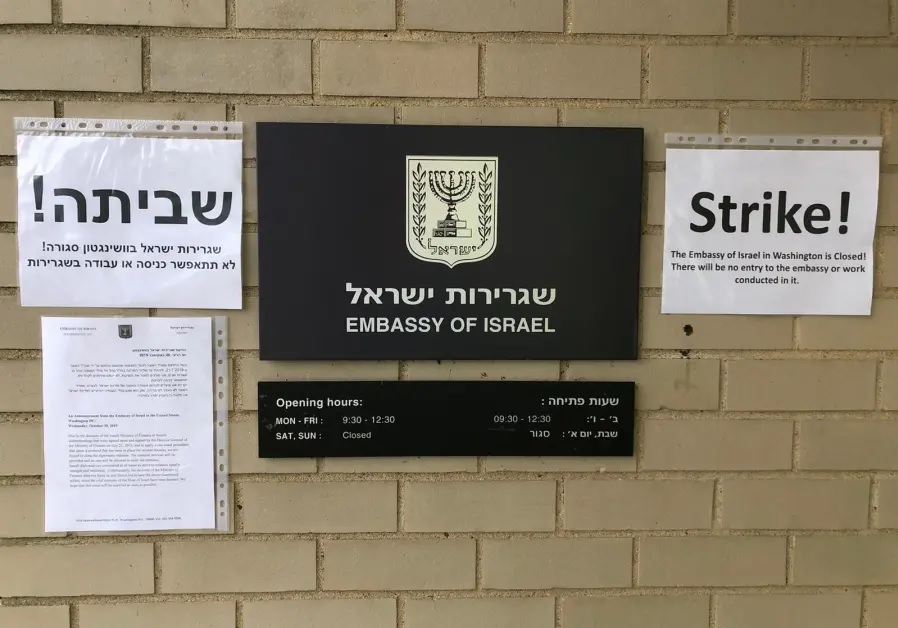 After a backlog of two days, the families of several niftarim were relieved to be informed that the labor dispute which had held up the transportation of the aronos for burial has been settled, allowing them to finally bring their relatives belatedly for kevurah.

“Baruch Hashem the strike is over,” Rabbi Yanky Meyer of Misaskim told Hamodia. “All the aronos which were held up are already on their way to Israel for kevurah. In addition, contingency plans have been put in place, at least in New York City, to prevent this from happening in the future.”

Wednesday morning, the Israeli Consulate in New York was closed due to a strike by the envoys and diplomats who work for the Foreign Ministry and the Defense Ministry. The workers have been involved in a longstanding dispute with the Finance Ministry concerning policies involving stipends and taxes. As a result, the workers went on strike and closed the consulate, not allowing entry by any parties and refusing to supply any services. Since the bodies being transported to Israel need paperwork which requires the stamp of the consulate, the strike in effect prevented them from leaving for prompt burial.

In the past, when there have been work stoppages, special arrangements were set in place to allow the shipping of meisim, in order to expedite the kevurah and allow the families to begin shivah. This time, however, due to the hard line of the parties involved, dispensation for the meisim was not allowed, causing consternation for families.

Hashgachah would have it that Zvi Gluck of Amudim, a noted askan with experience in funeral arrangements, was in Israel at the time to celebrate his son’s recent bar mitzvah. “After the celebration on Sunday, our family stayed a few days as we made some rounds to receive brachos,” Zvi told Hamodia. “Wednesday evening at 8:00 p.m. Israel time, which is 2:00 p.m. in New York, I received an emergency call from Meilich Walkenfeld, the funeral director of Shomrei Hadas, who informed me that he was unable to ship the body of a recently deceased person to Israel due to the strike.

“I immediately called all my contacts in the embassies and consulates, but the answer I got from all of them was that their hands were tied and there was nothing they could do. I realized that I would have to apply pressure to Israeli politicians, but here, too, it seems that I was going in circles, since this involved the union. I was told that I had to speak to Dana Benvenisti, the head of the union which represents the Ministry of Foreign Affairs workers. Yet this did not lead to any resolution.”

Mr. Gluck then contacted several politically connected people and asked them to exert maximum pressure to end the crisis. “I was working the phones from 11:30 p.m. until 4:00 a.m.,” Zvi said, “yet despite all our concerted efforts, it seemed we hit a brick wall.

“Finally, I was told to plead our case to Arnon Bar Dovid, the head of the Histadrut, who controls all the unions. I asked him, ‘How can you punish all the people who died and are awaiting burial? How can you punish their families who are waiting to begin shivah?’ He was unmoved and told me that it was in court and they would follow what the court decides.

“We decided that we had to launch an all-out media blitz. At 10:20 a.m., I spoke on Israeli media, and I pleaded the case in public. We contacted other media outlets, and the pressure began to mount. By now, there were three meisim waiting in New York, and we informed the public that the union was holding up the burial of some Holocaust survivors. This, too, helped tug at the heartstrings of the public, and I received word from government ministers that they were working to solve the crisis.

“At 3:00 p.m., they informed me that they would allow for a one-day moratorium to allow the three bodies to be moved to Eretz Yisrael before Shabbos. I told them this was unacceptable, because the problem could resurface at any time. Finally, an hour later, the court issued a 25-day injunction, which will allow all parties the time necessary to solve this issue for once and for all.”