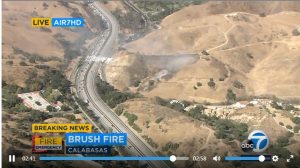 As a fire raced down the hill near the Mesivta of Greater Los Angeles in Calabasas, California, the yeshivah bachurim and staff were ordered to make a hasty evacuation by the firefighters who were battling the blaze.

At 10:00 a.m. Pacific time, some of the students at the yeshivah smelled smoke and the electricity went off, but since there was no visible fire in the vicinity, they began shiur as usual. At 10:20 the fire alarm rang for half a minute, but since no flames were seen, they thought it was just a test and classes resumed.

Shortly afterwards, flames were spotted on the hillside within 200 feet of the building, and they were moving quickly towards the structures of the yeshivah campus. Firefighters arrived and informed the hanhalah that the fire was threatening the entire area, and they were ordered to evacuate as quickly as possible.

The sifrei Torah and tefillin were removed from the building, and the entire student body packed into the available vehicles to make their hasty escape. “Cars which normally hold 5 passengers were holding about 10,” a mesivta bachur told Hamodia. “The flames were coming down the hill, and they were no more than 50 to 100 feet away when we left. Baruch Hashem everyone made it out safely and there was no damage to the yeshivah. We did see flaming tumbleweed as we drove off. Route 101, which is a main highway in the area, was closed down while they worked to put out the blaze.”

The fire fighters doused the blazed quickly, and within two hours the area was declared safe. However, due to high winds that are expected to last at least for another 24 hours, the yeshivah was advised to stay away from the area for the remainder of the day. Power is not expected to be restored until the area is considered out of danger.

Last year, when the yeshivah was forced to evacuate under similar circumstances, the bachurim gathered with their Rebbeim to learn in Adas Torah in the Pico neighborhood. For this afternoon, the bachurim were to gather at the Los Angeles Kollel for a seder from 4:00-6:00 p.m. Plans for tomorrow are under consideration by the Rosh Yeshivah, Harav Shlomo Gottesman, in consultation with Rebbeim, parents and safety authorities.