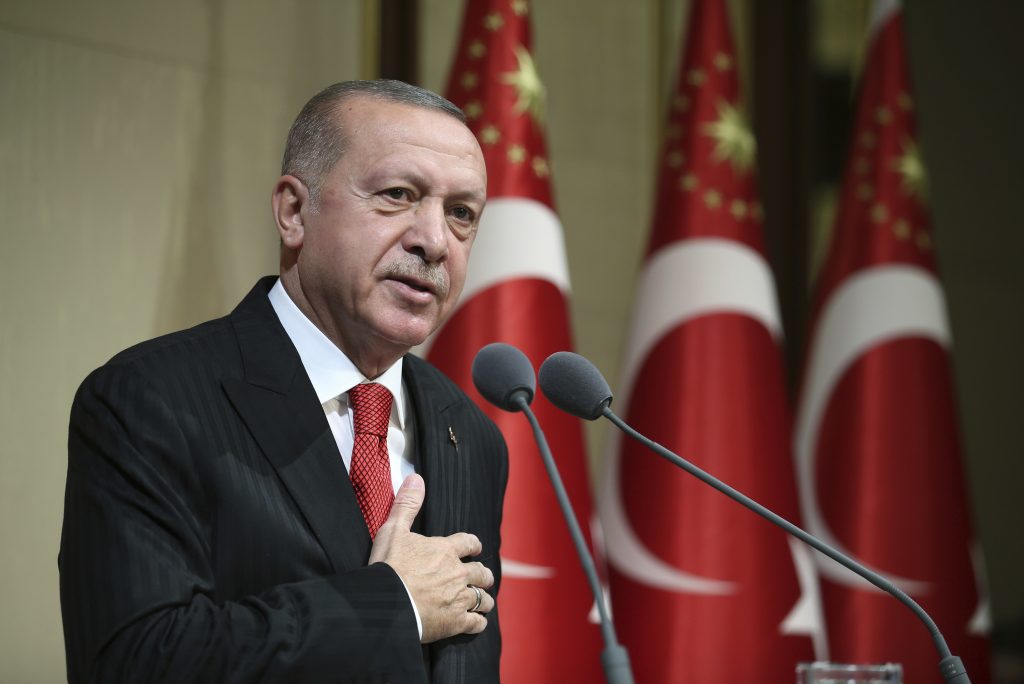 Erdogan then said Turkey “strongly condemns” a bipartisan bill to sanction senior Turkish officials and its army for Turkey’s military incursion into northeastern Syria, which passed 403-16.

Both bills, passed Tuesday, were a sign of further deterioration in Turkish-American relations, which have been strained over multiple issues, especially U.S. support for Syrian Kurdish fighters who fought against Islamic State militants but who are considered terrorists by Ankara.

Turkey disputes the description of mass deportations and killings of Ottoman Armenians in 1915 as genocide and has lobbied against its recognition in the U.S. for years. It has instead called for a joint committee of historians to investigate the slayings.

“We are saddened that a slander against our country is being accepted by a country’s parliament,” he said and added, “we would consider this accusation the biggest insult towards our nation.”

The step to consider the events as genocide “does not count for anything,” Erdogan argued, saying American lawmakers had acted “opportunistically” to pass the bill at a time when Turkey is being widely criticized for its incursion into Syria.

Turkey’s cross-border military offensive against Syrian Kurdish fighters, which Ankara says is necessary for its national security, began Oct. 9 after months of Turkish threats and a sudden decision by U.S. President Donald Trump to withdraw troops and abandon his Kurdish allies against the Islamic State group. Trump’s move was widely criticized by both Republicans and Democrats.

The second bill sanctioning Turkey shows the bipartisan disapproval of Trump’s decision and condemns Turkey’s offensive. The measure would bar most U.S. weapons sales to Turkey and slaps sanctions on foreigners attempting to send the Turks military equipment. It would also block high-ranking Turkish officials from their assets in the U.S. and restrict their travel.

“We will never accept those who attack Turkey and myself for the sake of supporting the PKK, which is a terror organization,” Erdogan said.

He was referring to the Kurdistan Workers’ Party, which has waged a 35-year armed insurgency in Turkey’s southeast and eastern regions. The Syrian Kurdish forces are linked to the group and follow the same ideological leader, Abdullah Ocalan, who is imprisoned in Turkey.

Turkey halted its military operation into Syria through two separate cease-fires brokered by the U.S. and Russia to allow the Kurdish fighters to withdraw 30 kilometers (19 miles) away from the Turkish border, but Erdogan renewed threats to resume the operation if promises weren’t fulfilled.

Turkey and allied Syrian fighters now control a portion of the previously Kurdish-held border zone, as Russian and Syrian government troops move into the rest of the areas following a deal with the Kurdish force.

Turkey’s foreign ministry criticized American lawmakers, saying it would be wrong for them to take their “vengeance” for Turkey’s Syria offensive through the Armenian genocide bill.

“Undoubtedly, this resolution will negatively affect the image of the U.S. before the public opinion of Turkey,” the ministry said.

One Turkish retiree in Istanbul echoed the government’s condemnation.

“How are we the ones doing the genocide?” asked 81-year-old Selami Orbasi, who noted the Ottoman Empire was attacked from all sides during World War I.

“America is doing the real genocide,” he added. “How did they do it? They broke up Iraq, they attacked Syria for their oil, they created a Kurdish state.”