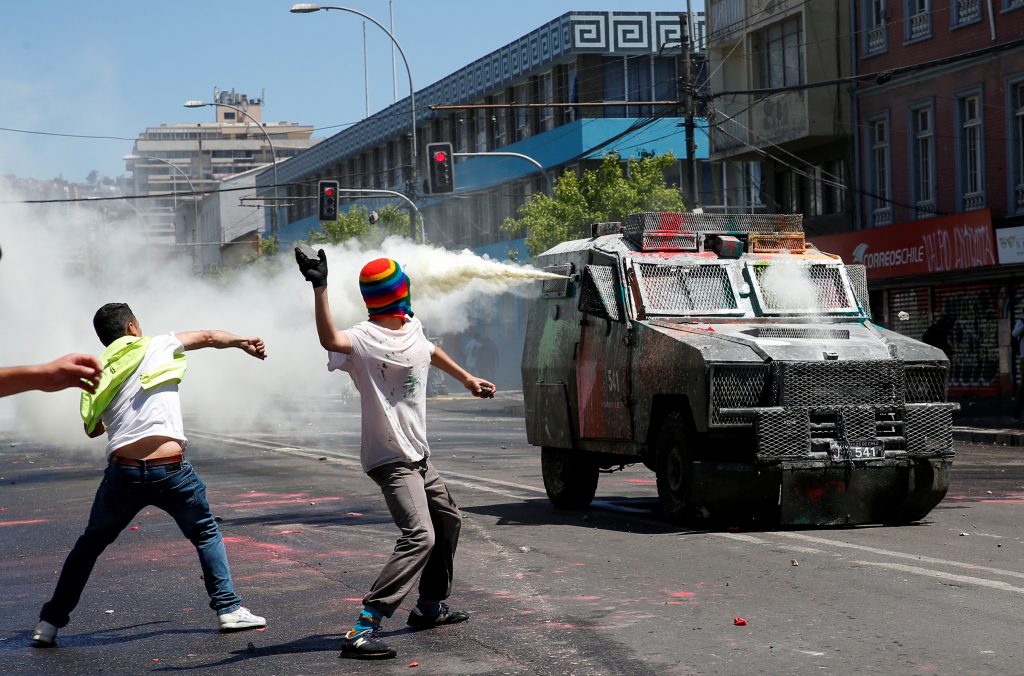 Chile withdrew on Wednesday as the host of an APEC summit next month at which the United States and China had been expected to sign a deal to ease trade tensions hurting the global economy, as raging street protests gripped the South American country.

The abrupt move — which came after weeks of riots over inequality in Chile that have left at least 18 people dead — plunged the Asia-Pacific Economic Cooperation meeting into disarray, with participating countries caught off-guard and no alternative venue lined up.

Chilean President Sebastian Pinera, fighting for his political survival, said he had taken the “painful” decision to cancel the summit, as well as the high-profile COP25 international gathering on climate change in December, to focus on restoring law and order and pushing through a new social plan.

“As president to all Chileans I must always put the problems and interests of Chileans, their needs, their desires and their hopes, first,” he said in a brief statement at the La Moneda presidential palace in Santiago.

The APEC summit was scheduled to bring together 20 world leaders on Nov. 16-17. U.S. President Donald Trump and his Chinese counterpart Xi Jinping had been due to sign an interim agreement to end the 15-month-old trade war.

The cancellation might deny the two leaders a chance to meet on neutral soil soon, but the Trump administration said it still expects to sign the deal with China next month. A White House official told Reuters that Chile’s cancellation of the trade summit had caught the administration by surprise.

Violent riots have left large parts of Santiago shut down, with the metro transport system suffering nearly $400 million in damage. A total 7,000 people have been arrested and Chilean businesses hit with losses of around $1.4 billion.

The major United Nations COP25 climate summit had been due to take place in Chile between Dec. 2 and Dec. 13.

That summit would have brought delegates from around 190 nations to talks aimed at thrashing out details of how to reduce global emissions to meet the Paris climate agreement. Climate change teen activist Greta Thunberg had planned to travel by boat to speak at the event.

The U.N. is urgently seeking a new venue for the conference, but said it may need to delay it.

Chile’s withdrawal — the first time a host nation has pulled out of hosting a major climate summit at such short notice — threw the process into confusion.

“We have lost a unique opportunity in the country’s history,” said Matías Asún, Chile director for Greenpeace, which added it was a “huge failure for the government in the face of environmental demands and injustices facing the country.”

It came just days before Mr. Trump is expected to formalize his government’s withdrawal from the Paris Agreement on Nov. 4.

The cancellations dealt a further blow to Chile’s much-vaunted image as one of the most stable countries in Latin America.

“This has been a very difficult decision, a decision that causes us a lot of pain, because we fully understand the importance of APEC and COP25 for Chile and for the world,” Pinera said.

Chile’s embattled leader fired almost half his cabinet this week — including his finance, interior and economy ministers — in a bid to quell the protests but to little effect.

With Pinera’s popularity at an all-time low, Chileans have been calling for new protests. The U.N. has said it will send a team to investigate allegations of human rights abuses by security forces.

Chile took over from the original host of the COP25, Brazil, after that country elected climate skeptic Jair Bolsonaro as president.

Jorge Heine, a former Chilean minister and now politics professor at the Pardee School of Global Studies at Boston University, said the effects of the decision on Chile’s international standing could be significant.

“Such summits cannot be rescheduled at will, as heads of state have their agendas full,” he said. “The credibility of Chile as a serious international actor and interlocutor has been compromised, and will not be easy to recover.”