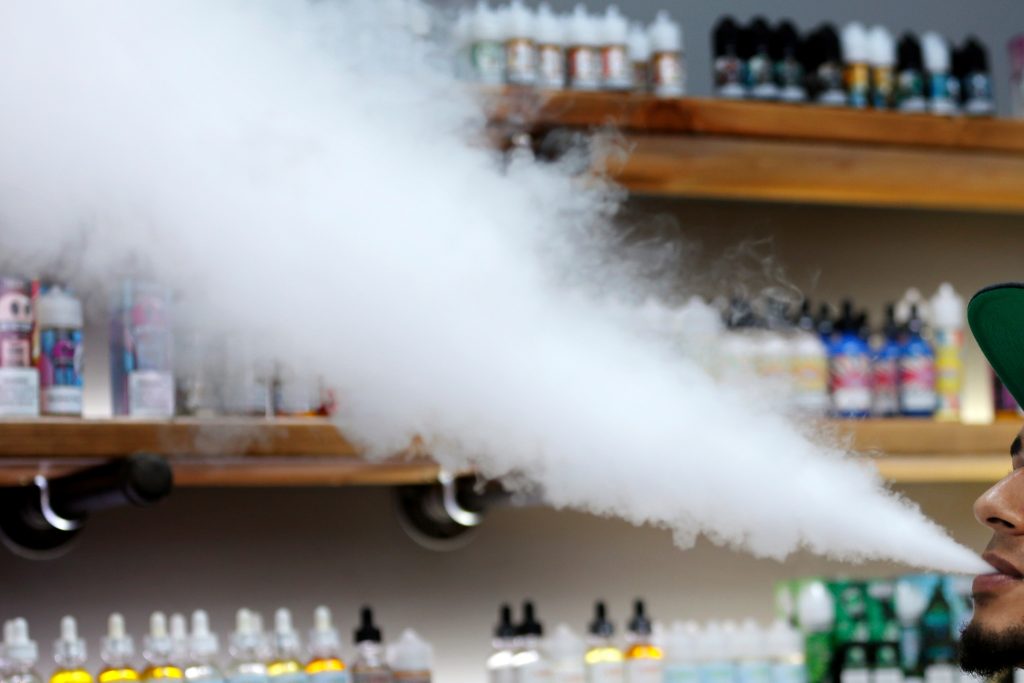 With over 1,600 cases of vaping-related lung injuries and 34 deaths reported by the U.S. Centers for Disease Control and Prevention, there is plenty that’s worrisome about the health impacts of e-cigarettes.

But the pulmonary harm — so concerning that the CDC website is updating the toll weekly — isn’t the only thing alarming pediatricians about their young patients and vaping. There also is the damage the practice might be doing to their brains.

A growing body of research suggests that nicotine is a potent gateway drug to other substances, as well as other troubling behaviors, especially in the high doses delivered by many e-cigarettes. Researchers, as well as clinicians, increasingly say they are seeing an increase in attention difficulties, irritability, volatility, even aggression and addiction, in young vapers whose brains are still forming.

“We have this burgeoning evidence base that nicotine exposure, especially early on, might increase your brain’s risk of getting addicted to not only nicotine but other substances,” said Brian Jenssen, a faculty member with the Children’s Hospital of Philadelphia’s PolicyLab and an expert in tobacco/e-cigarette treatment and policy.

“We know nicotine (use through e-cigarettes) is not only impacting the parts of the brain to do with addiction. It’s impacting other parts of the brain, too, and we’re seeing effects we haven’t seen with cigarette smokers,” said Sharon Levy, director of Boston Children’s Hospital’s adolescent substance use and addiction program and an associate professor with Harvard Medical School. “We’re seeing lots of kids who have problems with attention, concentration, and a lot of behavioral dysregulation. We’ve seen it with marijuana addiction. We’ve seen it with opioid addiction. We have not seen it with cigarettes.”

And the likelihood is we’ll be seeing more of these problems given the rapid growth of vaping among young people. According to research published this month in the New England Journal of Medicine, the prevalence of e-cigarette use among students in the eighth, tenth, and twelfth grades more than doubled from 2017 to 2019.

As physicians and scientists continue to seek explanations about what is causing serious lung problems in people who vape, including some who have used cannabis products, the impact of nicotine on the developing brain, especially in high doses, is still being learned. But the ever-growing implications are troubling.

Nicotine is highly addictive. Any smoker who has tried to quit cigarettes can attest to that. However, research has found the younger an adolescent starts using nicotine, the more likely he or she will continue into adulthood, even more so than users of other addictive substances.

Adolescence into young adulthood is a critical time for brain development. Studies suggest nicotine alters chemical pathways in the brain and boosts dopamine, a neurotransmitter associated with reward-seeking, pleasure and the risk for various addictions.

An analysis of more than 20 studies recently published in JAMA Pediatrics found that youth with a history of vaping were 3.5 times more likely than those who do not vape to become marijuana users. Other research has found people who use nicotine are more likely to try other substances.

Meanwhile, a landmark study by Columbia University medical school researchers viewed as the closest to biological proof of the gateway theory found that mice given nicotine in their water over a period of time showed addiction-related gene changes and increased vulnerability to cocaine dependence. Denise Kandel, a professor of sociomedical sciences in psychiatry at Columbia’s Irving Medical Center and a lead author on the study, said she and her colleagues have also found in subsequent research that alcohol and cannabinoids seem to have gateway-like relationships to cocaine use in mouse studies. Kandel said it’s not yet known if all the same molecular changes take place in humans, but because adolescents’ brains are still forming, young people are likely to be especially susceptible to the gateway effect.

For the young, nicotine is the most likely gateway. Adolescent alcohol consumption rates have decreased in recent years. The prevalence of tobacco use is greater than marijuana use, Kandel said, and the decreases in young people smoking combustible cigarettes have been undone by the “explosive increase” in vaping.

“Whatever its source, nicotine is nicotine,” Kandel said. “It will adversely affect the brains of adolescents and increase their susceptibility to the reward effects of other drugs.”

The research is especially shocking given the super-doses of nicotine adolescents are getting from e-cigarettes like Juul, a popular brand among young people. One Juul pod has as much nicotine as a pack of cigarettes, and young vapers tend not to partake sparingly.

“Many of these kids are using one, two, three pods a day,” Jenssen said.

Ironically, Jenssen said, it’s not unusual for these youngsters, priced out of their vaping habit, to start turning to conventional cigarettes — the very products e-cigarettes were marketed as an alternative to.

“There are reports consistent with nicotine toxicity even to the point of seizures in some kids,” Levy, of Boston Children’s, said.

Taken in low doses, nicotine, a stimulant, can seem to aid concentration. But in high doses, the opposite is true.

Even before vaping-related lung injuries swept the nation, the pediatrician said her clinic’s staff members were seeing behavioral problems that suggested brain impacts from high-dose vaping.

“If you develop problems with your concentration or behavior dysregulation, is all that going to get better? And the answer to that is we don’t know,” Levy said. “There are a lot of unknowns, and it’s all part of a scary landscape.”