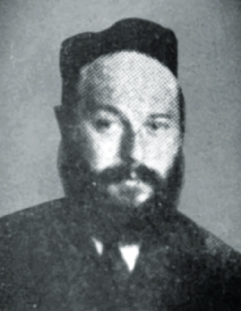 Rabbi Alexander Zusha Friedman, general secretary of Agudath Israel before the war, was a Torah scholar and author. Today, practically every Orthodox home has a set of his sefer, Maayanah Shel Torah. But few know of his work as a leader of the devoutly Orthodox community in the Warsaw ghetto.

Rabbi Friedman, who worked closely with Adam Czerniakow, head of the Judenrat, requested that Czerniakow set in motion the wheels of religious activism. The Rabbi organized food relief, established an expanded network of kosher soup kitchens, and arranged clandestine traditional Jewish studies for boys and girls. He was credited for establishing illegal Bais Yaakov schools in the ghetto. The kitchens themselves often hosted secret classes for children of the ghetto.

Deeply involved in rescue and relief, Rabbi Alexander Zusha earned the respect of Jews across the social and religious spectrum. An independent, creative thinker, he was also involved in the publication of the Orthodox underground Yiddish ghetto publication, Kol BaMidbar (A Voice in the Desert).

In July 1942, when deportations began, Reb Zusha, as he was known among the Jews, joined Schultz’s workshop, which was under the management of Avraham Hendel, z”l, who was known for his hatzolah activities. He sat among the shoes and the nails in the company of distinguished Rabbis. Upon returning home, he would teach his young students Torah.

His wife and his only daughter, born after 11 childless years of marriage, were soon taken for deportation to Treblinka. While still reeling from the pain of his loss, Reb Zusha threw himself into community and charity projects, six days a week. He rested only on the Sabbath.

In April 1943, as the Warsaw Ghetto uprising broke out, Reb Zusha was deported to the Trawniki labor camp near Lublin. He was together with the Piaseczna Rebbe and Reb Shimshon Stockhammer, Hy”d. Numerous attempts were made to save him, but to no avail. On November 3, 1943/4 Cheshvan, Reb Zusha was murdered by the Nazis.

Many times I wondered how our generation would have looked if we would have been zocheh that a Jewish leader like Reb Zusha would have survived the war and continued all his remarkable achievements in Jewish life; and in chinuch, what kind of impact an articulate speaker such as he was would have had on the younger generations. How a Jewish statesman like him would have responded to the political enemies of Yiddishkeit today.

Many years ago, I heard from Rabbi Moshe Akiva Druk, z”l, who was an associate editor in the Hebrew language Hamodia, under the leadership of my father, z”l, Rabbi Yehudah Leib Levin. It was the day after my grandfather, Harav Yitzchok Meir Levin, z”l, resigned from the Israeli government due to the decree of giyus banot (forced draft of girls into the army).

“‘Reb Moishe Akiva,’ he said, ‘ let’s drink l’chaim that, baruch Hashem, I finished already with this responsibility of taking part in the government.

“I looked at him and with tears in my eyes. I said, ‘Reb Itche Meir, Reb Zusha lebt shoin nisht.’

“But Reb Itche Meir insisted, ‘Er lebt shoin nisht — but his spirit will remain with us forever.’”

This coming Shabbos will be the 76th yahrtzeit of Reb Zusha, Hy”d, and I wondered what he would have said about us. Maybe when each and every single one of us takes upon ourselves one little area of doing for the klal like Reb Zusha did, so we will feel and so we will know that Reb Zusha was murdered, but his spirit has stayed with us forever.