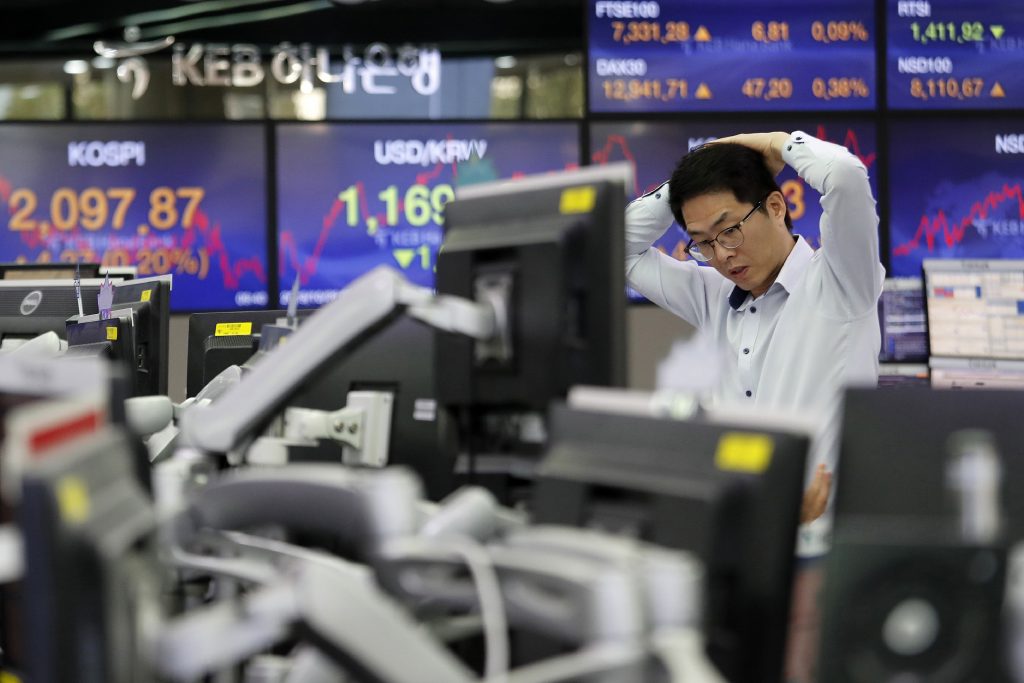 Shares were mixed in Asia and Chinese benchmarks fell Tuesday after Hong Kong’s leader warned that months of political protests are taking a harsh toll on the economy.

Shares rallied on Wall Street overnight, with the benchmark S&P 500 hitting a record high, at the onset of a week busy with corporate earnings and economic reports. Investors also are anticipating another interest rate cut by the Federal Reserve.

Investors have been balancing worries over the impact that the costly trade war between the U.S. and China is having on corporate profits and the global economy against renewed optimism that negotiations that got under way this month could result in some kind of resolution in the conflict.

“A U.S.-China trade deal, even an interim one, remains the critical macroeconomic event for the year,” Jeffrey Halley of Oanda said in a commentary.

“Number two is the trajectory of U.S. interest rates, and here the story is getting murky,” he said.

Chief Executive Carrie Lam said Tuesday that Hong Kong may fall into recession as the city enters its fifth month of protests. Third quarter data are due for release and if they show negative growth, then the semiautonomous Chinese territory’s economy will have entered a technical recession.

In other markets, South Korea’s Kospi lost 0.2% to 2,089.17. Shares rose in Taiwan, Bangkok and Singapore but fell in Jakarta.

Traders are awaiting the release of several important U.S. economic reports this week, including the Labor Department’s monthly employment report on Friday. Economists expect a slight increase in the unemployment rate to 3.6% in October from 3.5% in September.

The S&P 500 index closed Monday at 3,039.42, around 14 points above its previous record set on July 26 and up 0.6% for the day. It notched that milestone after weeks of hovering just below its prior high.

Investors have been encouraged as most of the companies that have reported quarterly results the past couple of weeks beat Wall Street analysts’ forecasts for earnings growth.

While the market waits for something concrete to emerge from the U.S.-China trade negotiations, investors have been largely playing it safe.

Despite Monday’s rally, the market could be in for some volatility this week as some 156 companies in the S&P 500 are scheduled to issue their quarterly results this week.

European markets got a boost Monday after the European Union agreed to give Britain a three-month extension for its planned departure from the 28-member trading bloc. It had been set to leave on Oct. 31. The extension gives both sides more time to make a deal that will cover trade and other issues.

Benchmark crude oil lost 28 cents to $55.53 a barrel in electronic trading on the New York Mercantile Exchange. It fell 85 cents to settle at $55.81 a barrel on Monday.

Brent crude oil, the international standard, dropped 23 cents to close at $61.02 a barrel.