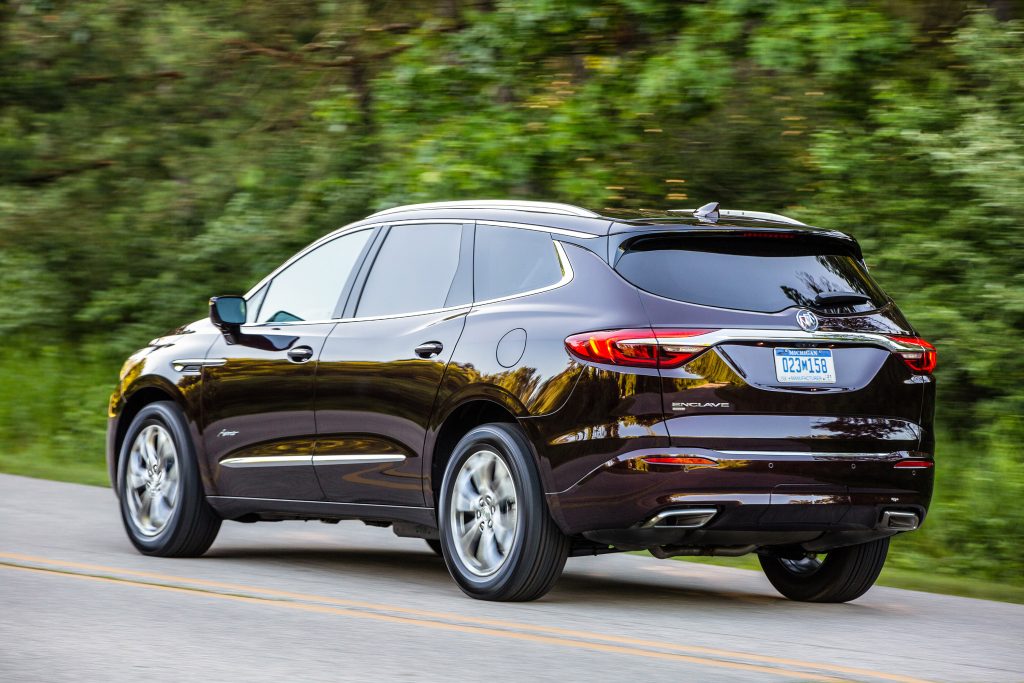 Buick’s Enclave full-size crossover utility vehicle, which entered its second generation two years ago, returns for 2020 with no major changes, but a few style and technology updates.

The starting price remains at $40,000 (plus $1,195 freight) for the base front-wheel-drive Preferred model, and prices top out at $55,800 for the all-wheel-drive Avenir model. Avenir is the recently introduced premium sub-brand for Buick.

Our test vehicle for this report was the all-wheel-drive Essence model ($44,000). Essence is the next step up from the Preferred, and is available with front-wheel drive, beginning at $42,000.

For 2020, there is a new Sport Touring package ($1,695) for the Essence model, bringing a monochromatic exterior featuring a unique Sport grille with body-color surround and 20-inch bright machined aluminum wheels with contrasting Satin Graphite pockets. This option was included on our tester.

Also added was the next-generation Buick infotainment system, including a new eight-inch-diagonal touch screen, standard on all trim levels, with available connected navigation.

Other new features include an optional new HD Rear Vision Camera (included as standard equipment on our Essence model) and an HD Surround Vision system. A new four-way power lumbar seat adjuster with a driver and front passenger massage feature are standard on Premium and Avenir models.

With the recent makeover, there were no radical exterior changes from the first generation, so the new generation is easily recognizable as an Enclave. But it is roomier inside and can seat up to seven passengers comfortably, even adults. There is a more muscular appearance, with fewer curves, and it is more aerodynamic, for improved fuel economy.

The roofline is lower, the windshield angle is more pronounced, and there is a longer wheelbase that allows for the increased interior space. LED lighting was added for 2018, including projector headlights and taillights.

The Avenir treatment, which is offered in other Buick vehicles as well, is meant to represent “the highest expression of Buick luxury,” the automaker says. It includes unique styling cues — such as the Enclave Avenir’s special three-dimensional mesh grille — along with more standard amenities, premium materials and an up level suspension with continuously variable real-time automatic damping.

All Enclave models are powered by a normally aspirated 3.6-liter V-6 engine rated at 310 horsepower and 266 foot-pounds of torque. It is connected to a nine-speed automatic transmission.

This engine propelled our Enclave quite well, including drives around town and for a weekend trip that included some well-maintained unpaved state and national park roads.

Standard safety features on all models include a backup camera (showing in the dash audio/nav screen), rear park assist and seven air bags, including a front center side air bag.

A rearview camera mirror ($825) is available, but was not included on our test vehicle. It allows the rearview mirror to work as a regular mirror or as a display for a rearview camera (separate from the standard rear camera). In the camera mode, there are no obstructions for the rear view, such as rear headrests, body panels and passengers’ heads.

The available Surround Vision camera system gives an overhead downward view of the vehicle to assist in maneuvering at low speeds. This was included on our vehicle as part of the rearview mirror camera system.

Our vehicle’s standard Quiet Tuning cabin noise-reduction system brought active noise cancellation, designed to block and absorb noise. That made our Enclave very quiet inside, even at highway speeds and on some unpaved roads.

The all-wheel drive gives the Enclave all-weather driving capability, along with limited off-road ability, allowing it to handle many gravel and dirt roads in national and state parks. But the vehicle has lower ground clearance than most traditional SUVs, and the all-wheel drive doesn’t include low-range gearing for serious trail driving.

Buick’s Intelligent All-Wheel Drive, available on Premium and Avenir models, has an active twin-clutch rear differential and a switch to force front drive only for better fuel efficiency. But our Essence model’s AWD did not include these extras.

We had seating for seven, with two bucket seats up front, two captain’s chairs with a center aisle in the middle row, and a three-person 60/40split/power folding bench seat in the rear.

Oddly, though, while we could lock the vehicle by touching the exterior door handles after exiting, we had to use the remote-control button to unlock the doors upon our return.

While 18-inch aluminum wheels are standard, our tester came with the optional 20-inch in the above-mentioned Sport Touring package. We also had the power front/fixed rear dual-panel moon roof ($1,400), and a floor-liner package ($395).

The eight-inch Buick infotainment system is standard on all models, and includes six USB ports (two for infotainment, four for charging). It’s compatible with Apple CarPlay and Android Auto.

High-tech safety features on our model included the Lane Change Alert with Side Blind Zone Alert, Rear Cross Traffic Alert, Rear Park Assist and the HD Rear Vision Camera. We did not have radar cruise control, which is quickly becoming standard on many vehicles, including ones that cost less than half of what the Enclave costs.

With the redesign, the Enclave retained its generous third-row space, particularly the legroom, which makes that seat nearly as comfortable for adults as for children. This is one of the few big crossovers that can achieve that. There is also ample cargo room and overall interior space.

The captain’s chairs in the middle row made access to the third row easier because of the gap between the two middle-row seats.

We also had a universal garage/gate opener. In the center console area, in front of the shifter, there were dual USB ports and a nice tray.

Highlights: The Enclave entered its second generation for 2018. It’s roomy and comfortable, has plenty of power and decent fuel economy, and comes with a wide variety of standard and optional features, depending on trim level.

Disadvantages: Can get pricey at higher trim levels, and with available options.