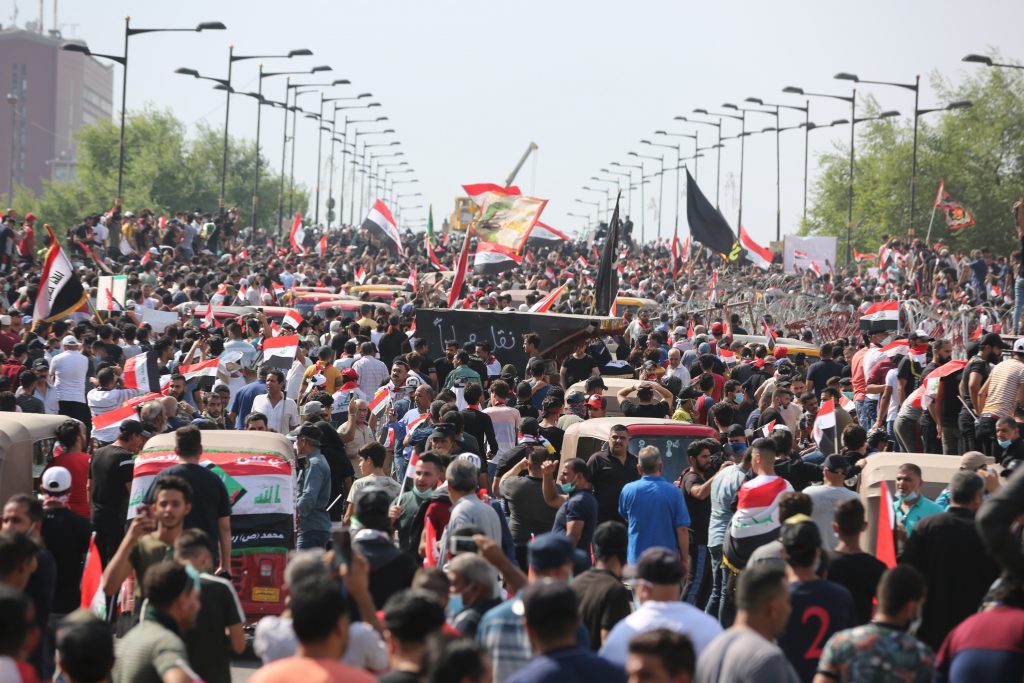 Sixty-three protesters have been killed in clashes across Iraq with security forces during two days of protests against corruption and economic woes, a rights watchdog said on Saturday.

Ali al-Bayati, a member of the Iraqi High Commission for Human Rights, said in a report that 2,592 people — including protesters and security forces — have been wounded in the clashes.

A source with the commission told dpa that six protesters were killed in the Iraqi capital Baghdad and the southern city of Nasiriyah on Saturday.

Hundreds of demonstrators tried to breach roadblocks set up by security forces near the Jumariyah Bridge in central Baghdad on Saturday.

“The demonstrators attempted to go to the Green Zone but were held back by the tear gas that the security forces fired,” a witness said.

The Green Zone is home to government offices and foreign embassies in Baghdad.

Saturday’s violence shattered a short lull in the protests in Baghdad, where cars and pedestrians had returned to the streets early Saturday.

Demonstrators, meanwhile, set up tents staging a sit-in in central Baghdad’s Tahrir Square, an epicenter of the protests.

Protests have roiled the oil-rich country in two waves this month as demonstrators decried corruption, lack of jobs and poor access to electricity and clean water.

Lawmakers failed to meet in Baghdad on Saturday to discuss protesters’ demands due to a lack of quorum, sources in the legislature said without providing details.

On Friday, protesters took to the streets in Baghdad and other parts of Iraq, undeterred by promises of reforms that the government announced following similar demonstrations earlier this month.

At least 42 people were killed across Iraq on Friday, according to the commission.

The protests come one year after Prime Minister Adel Abdel-Mahdi took office as the country grapples with the aftermath of a lengthy military campaign against the Islamic State extremist group.

Abdel-Mahdi met on Saturday with security commanders of Baghdad and other provinces to discuss means of boosting security and stability in cooperation with citizens, according to a statement by his office.

The Special Representative of the United Nations Secretary-General for Iraq, Jeanine Hennis-Plasschaert, said she deeply regrets and condemns “the further loss of life and injuries,” and strongly denounces “the destruction of public and private property” in Iraq.

In a statement, she expressed grave concerns about armed entities seeking to hinder Iraq’s stability and unity, undermining the people’s right to peaceful assembly and their legitimate demands.

“The protection of human life always comes first. Armed entities sabotaging the peaceful demonstrations, eroding the Government’s credibility and ability to act, cannot be tolerated. Iraq has come a long way, and cannot afford to slide back into a new cycle of violence,” she said.