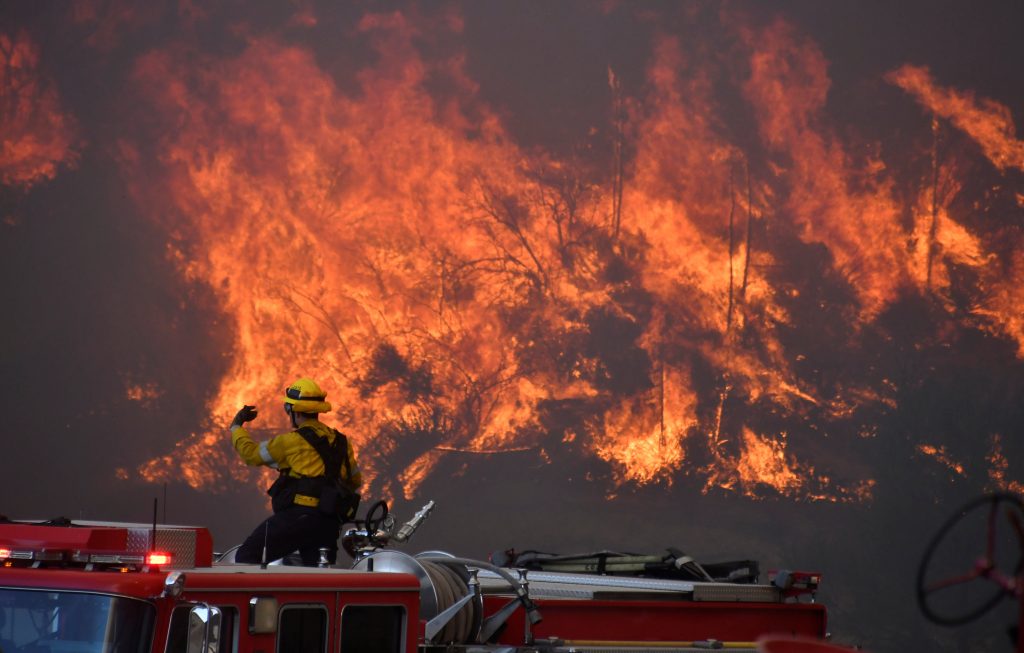 Punishing Santa Ana winds that pushed fires into Los Angeles-area neighborhoods, burning six homes, were expected to last through Friday and could prompt more power shutoffs to hundreds of thousands of people.

The wind-whipped blazes broke out Thursday in the Santa Clarita area and the largest remained uncontained. As many as 50,000 people were under evacuation orders.

In Northern California, a fire near the wine country town of Geyserville burned 49 buildings.

The threat of hot, dry winds, driving flames far and wide, was met with fleets of firefighting aircraft and hundreds of firefighters on the ground, who tried to protect homes where backyards were surrounded by trees and brush.

In some places, they failed.

As hot embers flew, subdivision homes and rural ranch properties were damaged or destroyed in the Canyon Country area of Santa Clarita and in nearby Castaic.

“We know of at least six but that number may rise,” Los Angeles County Supervisor Kathryn Barger said.

In the rural areas, where at least two ranch houses burned, people rushed to rescue dozens of animals.

No injuries were reported but fire officials say a firefighting helicopter was struck by a bird and its windshield damage, forcing it out of the fight until Friday.

The shutdowns were designed to prevent fierce winds from hurling branches into power lines or toppling them, sparking wildfires.

By nightfall, crews reported they had slowed the forward progress of the flames but the winds, accompanied by hot weather and bone-dry humidity, were expected to pick up overnight and possibly increase into Friday, with gusts of 45 to 60 mph in places, before easing off.

Unfortunately, they were forecast to increase again over the weekend in Northern California, where a fire in wine country that began Wednesday night had burned 49 buildings and prompted evacuation orders for some 2,000 people in the Geyserville area.

The blaze in Sonoma County had burned 25 square miles (65 square kilometers), whipped up by the strong winds that had prompted Pacific Gas & Electric to impose sweeping blackouts in northern and central California.

The outages affected half a million people or nearly 180,000 customers in 18 counties, most of whom lost power Wednesday afternoon and had it restored by Thursday evening, PG&E official Keith Stephens said.

The blackouts were instituted after utility electrical equipment was blamed for setting several blazes in recent years that killed scores of people and burned thousands of homes.

PG&E said Thursday it didn’t de-energize a 230,000-volt transmission line near Geyserville that it said malfunctioned minutes before the fire erupted.

The company filed a report with the state utilities commission saying it found a “broken jumper” wire on a transmission tower around 9:20 p.m. Wednesday.

PG&E CEO Bill Johnson said it was too soon to know if the faulty equipment started the fire. He said the tower had been inspected four times in the past two years and appeared to have been in “excellent condition.”

Meanwhile, PG&E warned that an even larger power outage may occur as early as Saturday and could affect portions of 33 counties in the San Francisco Bay Area, wine country and Sierra foothills.

Forecasts for Saturday into Monday showed possible wind gusts of 40 to 60 mph in most elevated areas of Northern California, and as high as 75 mph (nearly 121 kph) on some peaks.