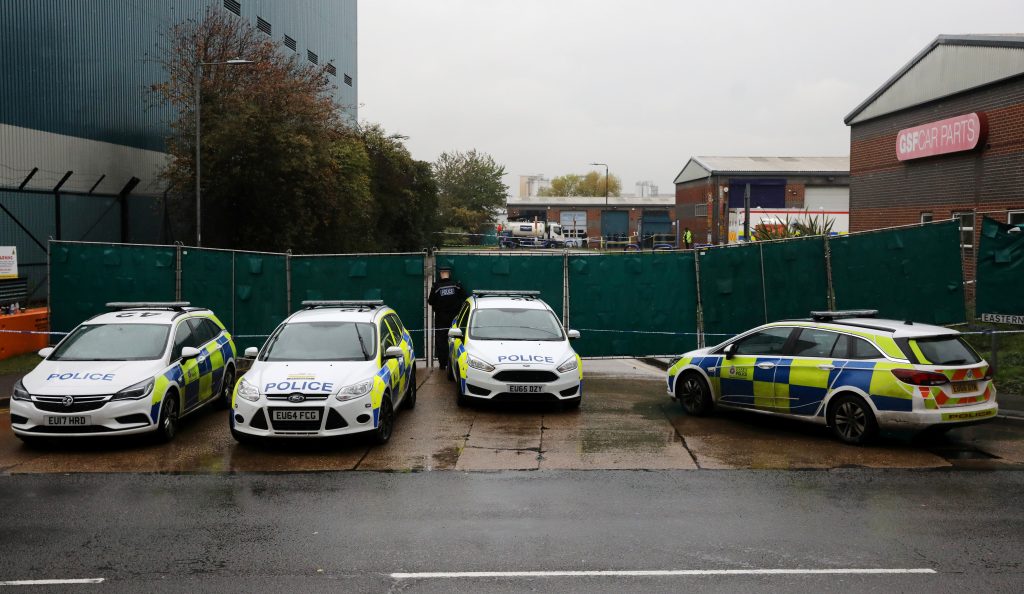 China called on Britain on Friday to seek “severe punishment” for those involved in the deaths of 39 people, believed to be Chinese nationals, found in a truck container near London, and a major state-backed paper said Britain should bear some responsibility for the case.

Paramedics and police found the bodies of 31 men and eight women on Wednesday on an industrial estate at Grays in Essex, about 20 miles east of the British capital.

For years, illegal immigrants have stowed away in trucks while attempting to reach Britain, often from the European mainland. In 2000, 58 Chinese were found dead in a tomato truck at the port of Dover.

Chinese Foreign Ministry spokeswoman Hua Chunying said British police were still carrying out their verification work and at present are not able to verify the nationalities of the deceased.

“We hope that the British side can as soon as possible confirm and verify the identities of the victims, ascertain what happened and severely punish criminals involved in the case,” she told a daily news briefing.

Hua said that no matter where the victims were from, the case was an enormous tragedy.

The international community should strengthen their cooperation on fighting illegal immigration and on communication and intelligence to prevent such incidents from happening again, she said.

The Chinese Embassy in London said it has sent a team to Essex to coordinate with the police.

The widely read Chinese tabloid the Global Times said in a Friday editorial that at the moment it was impossible to say how much responsibility the dead should bear for the tragedy.

“But such a serious humanitarian disaster has occurred under the eyes of the British and Europeans,” it said. “It is clear that Britain and relevant European countries have not fulfilled their responsibility to protect these people from such a death.”

Even if the victims were found to have been smuggled into the country, their deaths were not their fault, added the paper, which is published by the ruling Communist Party’s official People’s Daily.

“We hope that Britain and European countries will put into effect their various commitments to human rights and make due efforts for Chinese people to be free from abuse and sudden death.”

Britain appears not to have learned its lesson from the Dover incident two decades ago, it added.

“Imagine how thoroughly European countries would take measures if dozens of Europeans were collectively tragically killed in some way,” the paper said.

“Could the British and European people ask themselves why they have not been able to avoid a similar tragedy…? Did they take all the serious remedial action that they could have?”