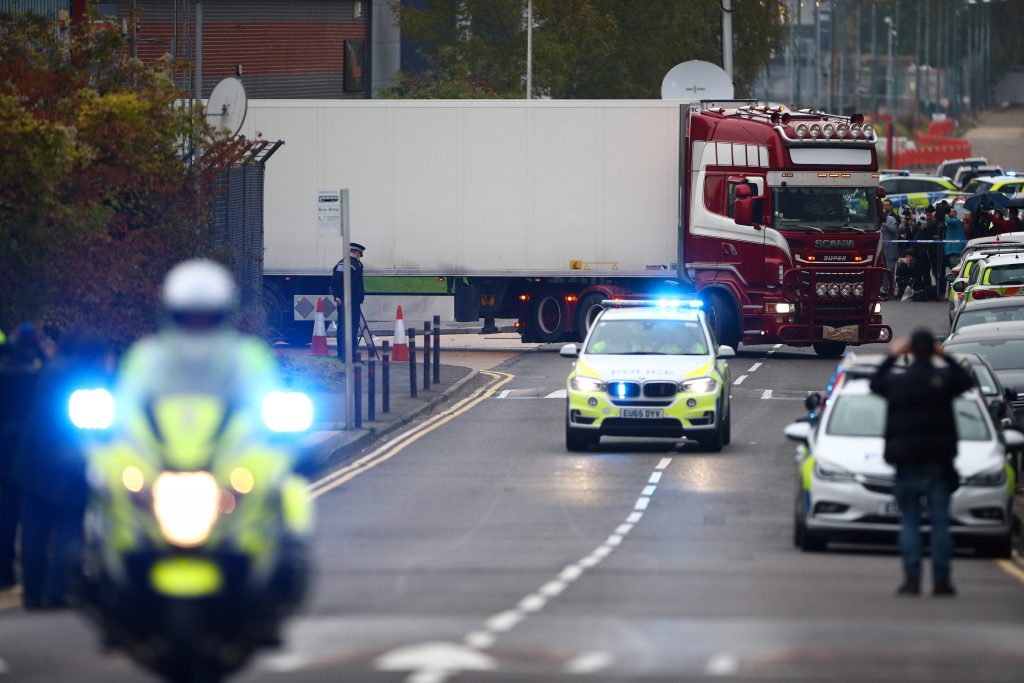 The 39 people found dead in the back of a truck near London were Chinese, ITV News reported on Thursday, as police questioned the driver of the vehicle who was detained on suspicion of murder.

Paramedics and police found the bodies of 38 adults and one teenager early on Wednesday in a truck container on an industrial estate at Grays, about 20 miles east of the British capital.

Police have not yet identified the victims but ITV reported that they were all Chinese. Essex Police said they could not confirm the report and there was no immediate comment from the Chinese Foreign Ministry or from China’s London embassy.

For years, illegal immigrants have attempted to reach Britain stowed away in the back of trucks, often seeking to reach the United Kingdom from the European mainland.

In Britain’s biggest illegal immigrant tragedy, the bodies of 58 Chinese people were found crammed into a tomato truck at the southern port of Dover in 2000. The vehicle had begun its journey in Zeebrugge.

In the latest incident, the container arrived at Purfleet docks in Essex, southern England, having also traveled from the Belgian port of Zeebrugge.

The red cab unit was believed to have come from Ireland. It had “Ireland” emblazoned on the windscreen along with the message “The Ultimate Dream.”

The grim discovery of the bodies was made at 1.40 a.m. just over an hour after the container arrived in Britain

“It is hard to put ourselves in the shoes of those emergency services …  as they were asked to open that container and to expose the appalling crime that had taken place,” Prime Minister Boris Johnson said.

The vehicle has been moved to a secure site at nearby Tilbury Docks where the bodies can be recovered and further forensic work undertaken to begin what police said would be the lengthy process of identifying the victims.

The National Crime Agency said it was assisting the investigation and working to “urgently identify and take action against any organized crime groups who have played a role in causing these deaths.”

Shaun Sawyer, the national spokesman for British police on human trafficking, said many thousands of people were seeking to come to the United Kingdom. While they were able to rescue many of those smuggled into the country, Britain was perceived by organized crime as a potentially easy target for traffickers.

“You can’t turn the United Kingdom into a fortress. We have to accept that we have permeable borders,” he told BBC radio.