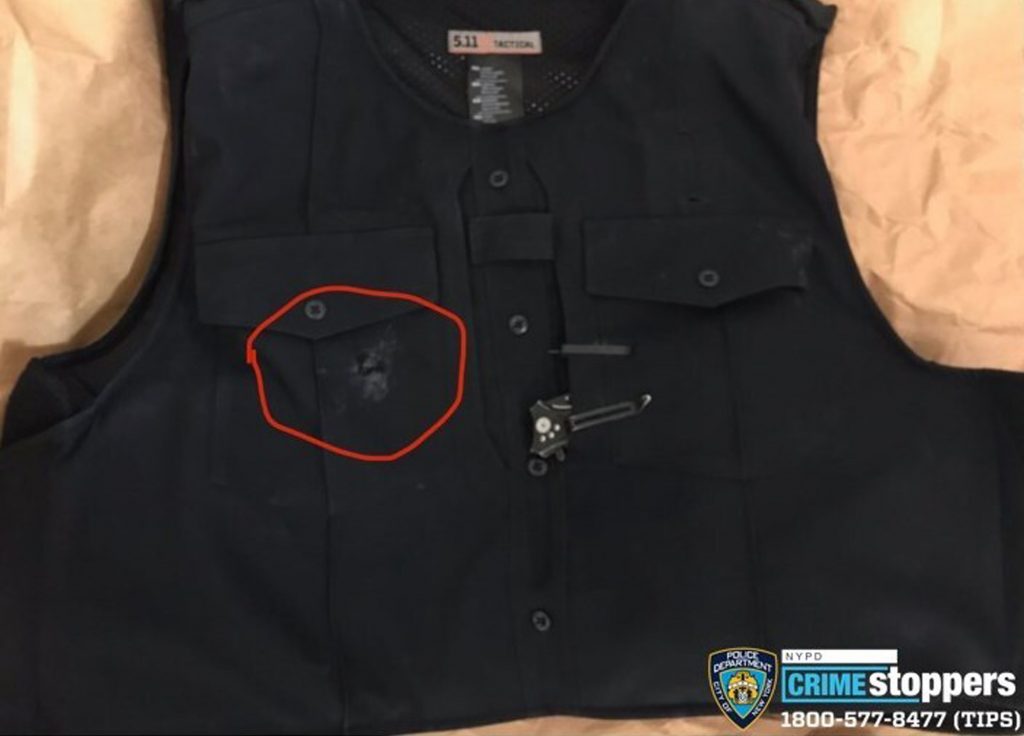 A man who pointed a handgun at a New York City police officer during a confrontation was shot dead by other officers Wednesday, while the cop was saved by his bulletproof vest, authorities said.

It was the fourth shooting by New York City officers in the last nine days, three of which were fatal.

The man had been banging on a woman’s door in a Harlem apartment building and breaking glass while armed with a .9mm handgun, according to Police Commissioner James O’Neill.

The officer, who wasn’t immediately identified, was treated at a hospital and released. Video tweeted by the Police Benevolent Association showed fellow officers applauding vigorously as he was brought outside in a wheelchair and assisted into a police van. He acknowledged them with a wave.

The police department released a photo of the officer’s vest, showing a bullet mark on his right breast pocket. Police didn’t immediately say who fired the shot that hit the officer.

O’Neill said at a hospital briefing that eight uniformed officers responded to a resident’s 911 call shortly before 2 a.m. about a neighbor who was harassing her.

As the officers fanned out to search the building, one encountered the man pointing a handgun.

“A violent struggle immediately began, and shots were fired,” O’Neill said. “The officer yelled for help as the struggle continued, and the other officers discharged their firearms, striking the suspect several times,” said O’Neill.

He said that in addition to being shot, the officer had been punched several times in the face.

“Thankfully we can report that his vest saved his life,” Mayor Bill de Blasio said on Twitter. “I visited with him this morning and he’s in good spirits. He’s a seven-year veteran and an example of courage and strength.”

Police didn’t identify the slain man, who was 29.