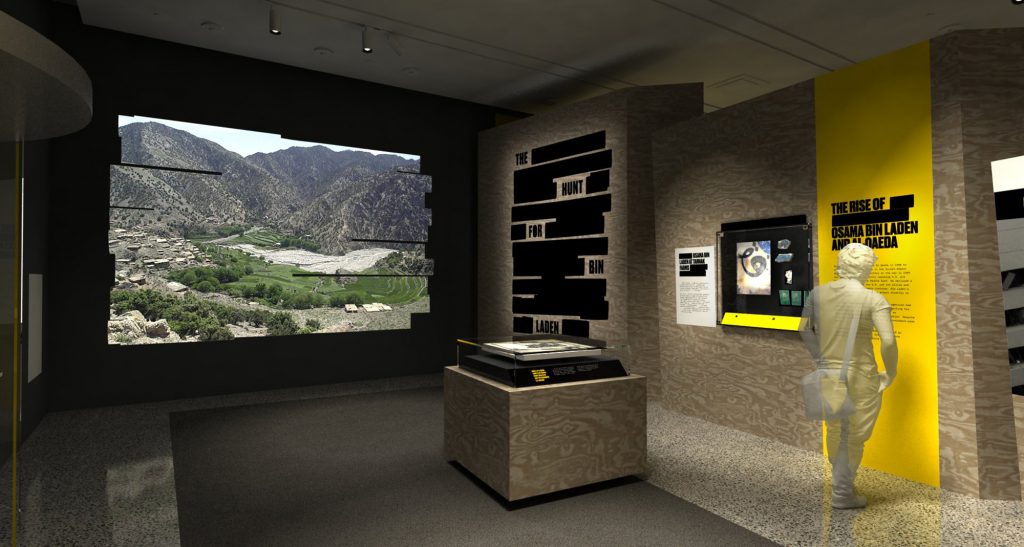 Declassified U.S. government documents and artifacts are part of a new exhibit on the decade-long search for Osama bin Laden at the site of the New York terrorist attack.

“Revealed: The Hunt for Bin Laden” opens Nov. 15 at the National September 11 Memorial & Museum, a multimedia account of the mission that ended with bin Laden’s death in Pakistan in 2011.

The exhibit presents the hunt for bin Laden as a sort of who-done-it come alive with graphics, videos and the voices of the protagonists, from intelligence agents, former President Barack Obama and members of the U.S. Navy SEALs team that raided bin Laden’s home and shot and killed him.

“We began to think of it as a crime story, albeit a horrific one at a huge scale,” the design firm, New York-based C&G Partners, said in a statement. “The exhibit is built of tall angled ‘shards’ of raw plywood, no two alike, which can be positioned to evoke a mountain canyon, military field office or residential compound.”

Photos show the scenes of the search, from caves to a wild mountain range in Afghanistan where bin Laden was believed to have been hiding. He was under protection of the Taliban that issued al-Qaida members passports allowing them to move around freely. One of these passports will be displayed.

In other images, American military personnel huddle in strategy sessions and outside on terrain being searched. Visitors will see trunks containing items gathered during various U.S. raids of al-Qaida locations that might have yielded evidence of bin Laden’s whereabouts.

One pre-9/11 U.S. intelligence document reveals: “Bin Laden Determined to Strike in US.”

The presentation does not whitewash failures, titling one section “Gains and Setbacks.”

The exhibit details the failure to catch bin Laden before he fled Afghanistan. One artifact on display from his al-Qaida training camp there is a blue wall fragment seen in propaganda videos featuring bin Laden.

After he disappeared, law enforcement experts and members of military and civilian anti-terrorism units describe how they hounded down al-Qaida followers working to hide him. Finally, members of Navy SEAL Team 6 explain, in their own words, how they acted on a tip that led them to descend on his compound in Abbottabad, Pakistan, as Obama and his Cabinet watched from the White House.

The exhibit includes images and a model of the home where bin Laden was shot to death in his bedroom.

The 9/11 museum is a nonprofit located on the 16-acre trade center site where more than 2,700 people died and are memorialized with two reflecting pools in the footprints of the fallen twin towers. The museum’s collection includes more than 60,000 items that tell intimate stories linked to the attacks and its aftermath.