Israel Gantz Accepts Mandate, Promises to Reach Out to All Sectors
Israel 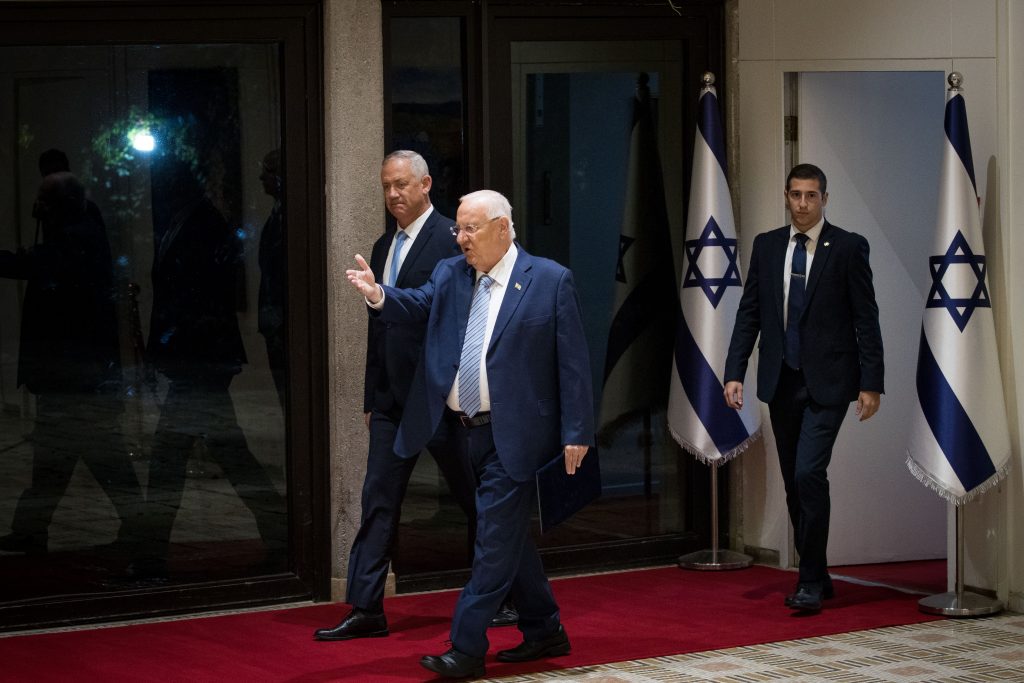 Blue and White party leader Benny Gantz was given the task of putting together a new government after two indecisive elections and a month of stalemate on Wednesday evening.

As he accepted the mandate from President Reuven Rivlin at the President’s Residence inYerushalayim, Gantz promised to work for national conciliation, after months of some of the most vicious campaigning in Israeli political history.

“An entire nation is waiting to sigh with relief” that the political deadlock is over, he said.

“I will work for all of the people of Israel. A government that Israel is desperate for. We will form a government that will push for peace and will know to deal definitively with every enemy,” said the former IDF chief of staff.

“I will do everything I can to create a government of national healing that will unite the tribes,” Gantz declared, adding that “we are here to represent everyone, the chareidim, with whom we must sit and talk as brothers, the Arab citizens, our Druze brothers, as everyone else.”

However, the former IDF chief of staff’s pledge to form a “liberal unity government” ran counter to the rhetoric of reconciliation. During the campaign, he and the party’s No. 2 Yair Lapid resorted to chareidi bashing and ruled out a coalition with them. Gantz and Lapid spelled out their liberalism in terms of public transportation on Shabbos, civil marriage and other measures that would destroy the decades-old status quo.

Gantz reportedly called United Torah Judaism leaders Rabbi Yaakov Litzman and Rabbi Moshe Gafni Wednesday evening to invite them to sit and talk. But they declined, citing their commitment to negotiate only as part of the Likud-led bloc.

Gantz said all political parties will be invited to join the talks. His coalition will be open to all except racists and advocates of violence, he said. That was a reference to the far-right Otzmah Yehudi, though not to the Arab Joint List, if reports of contacts between them and Blue and White are accurate.

“I will invite all the parties that are represented in the Knesset, even those who will not be in the government. I will first turn to the Likud and to its head Netanyahu and offer for him to be part of that government.”

“I turn to Netanyahu tonight and say, I have known you for many years, I wish you to come out clean and pure from the legal challenges you are facing,” Gantz said.

“I accept the mandate from the president with great appreciation. With modesty and lowering my head, I accept this responsibility,” said Gantz.

Gantz will have until November 20 to form a government. If he cannot, MKs will have until December 11 to submit a request for another MK to try, a scenario which is not unlikely, given the formidable obstacles Gantz faces, on the one hand, and the strong desire in all quarters to avert another election.