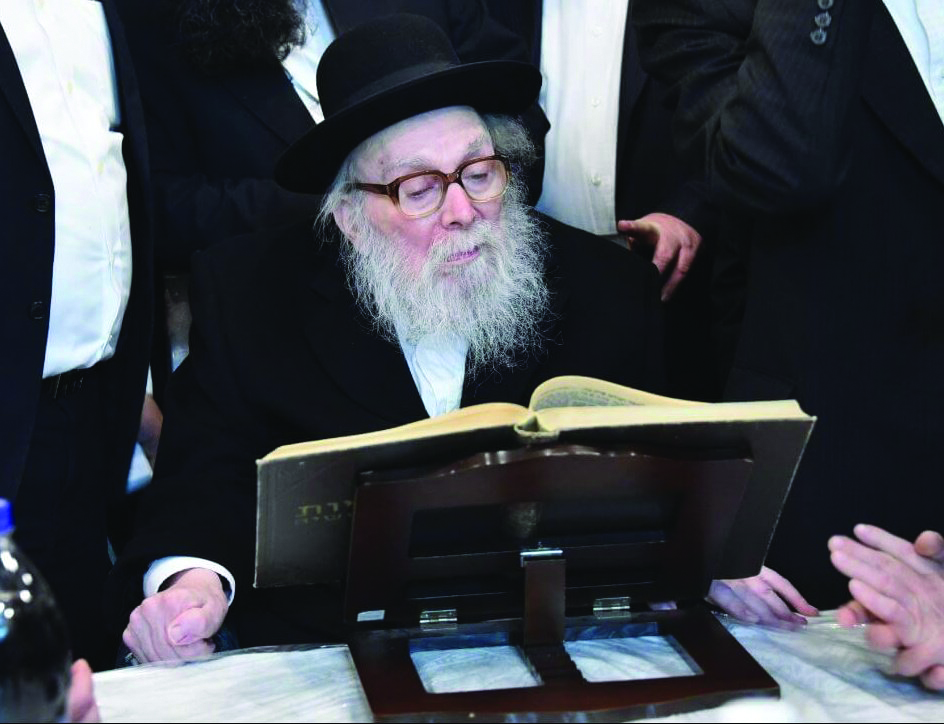 On Monday night, Motzoei Simchas Torah in Israel, the Torah world was plunged into mourning upon hearing that Harav Nissim Karelitz, zt”l, had passed away. The Rav was 93 and had been suffering from a prolonged illness. Rav Karelitz was the Rosh Kollel of Kollel Chazon Ish and the Rav of the Ramat Aharon neighborhood of Bnei Brak, as well as an Av Beis Din in the city for more than 50 years. With his passing, the generation has lost a giant in Torah and yiras Shamayim, a marbitz Torah and halachah, and a Dayan, who merited to serve the Chazon Ish, zy”a, both as a nephew and talmid.

Rav Karelitz was known for his greatness in Torah, his modesty and his remarkable histapkus b’muat. He constantly fled from honor, but at the same time, firmly upheld principles of truth and peace in his beis din, and did not shy away from making clear decisions.

Rav Shmaryahu Yosef Nissim was born on 18 Av 5686/1926 in Kosava, Belarus, to Harav Nachum Meir Karelitz, zt”l, one of the eminent talmidim of Kelm and Slabodka. He also was a talmid of the Chofetz Chaim in Radin, and was very close to Harav Chaim Ozer Grodzensky.

Rav Meir was the brother-in-law of the Chazon Ish, zy”a. In Lithuania, he served as Rav of Maišiagala, near Vilna.

After his birth, Rav Karelitz was in great danger, and miraculously survived. Therefore, it was instructed that he be named Nissim — despite the name being uncommon in the Ashkenazi community. Hence at his bris, he was called Shmaryahu Yosef, for his grandfather, Rav Shmaryahu Yosef Karelitz, the Rav of Kosava and father of the Chazon Ish, and Nissim for the miracle that occurred. For the rest of his life, he was primarily known by the name that marked the miracle of his survival.

As a child, young Nissim attended the cheder in Kosava, where he was imbued with the legacy of the renowned Karelitz family. But when the authorities began forcing parents to send their children to Polish schools, 10-year-old Nissim’s father decided to move the family to Eretz Yisrael. They settled in Bnei Brak, where they were reunited with the Chazon Ish, who had come about two years earlier, in Tammuz 5693/1933.

Young Nissim began attending Yeshivas Tiferes Tzion, where one of his Rebbeim was Harav Michel Yehudah Lefkowitz, zt”l. He quickly rose to become one of the outstanding students in the yeshivah, acquiring Torah and yiras Shamayim while displaying sterling middos.

He became very close to his uncle, the Chazon Ish, and came to him frequently for advice. He also slept in the Chazon Ish’s home for a long period of time, and learned with the sage frequently. Rav Nissim later shared that he was once on an outing with the Chazon Ish, and they used the opportunity to speak in Torah. A ben Torah approached the Chazon Ish and spoke to him about a matter relating to Maseches Bava Basra. As they made their way home, the Chazon Ish remarked to himself that he apparently had to review the masechta again, and Rav Nissim decided to observe how the Chazon Ish did so. Then he described what he witnessed: “As soon as he arrived home, he began learning the masechta, and a day and a half later, I could see based on the page open in his Gemara that he had finished the entire masechta of 176 daf.” Rav Nissim also related that the Chazon Ish would learn the entire Maseches Chullin in memory of his father and mother on their yahrtzeit.

Rav Nissim’s lifelong in­­volvement with halachah, and conveying it to future generations, was cultivated by his eminent uncle, with whom he consulted on all areas of halachah. Rav Nissim related that he was once walking with the Chazon Ish a short time after the latter had been ill. They walked slowly the whole way, and as they arrived at their destination, the Chazon Ish pointed out that despite the fact that they had walked so slowly, ultimately, they had arrived. “Had we stood in one place, we would never have arrived,” said the Chazon Ish. Said Rav Nissim, “I thought he was giving me mussar, but sometime later, I better understood what he had said. It was after he had suffered a heart attack and the doctors warned him not to talk for six weeks. Throughout that time, when he was able to speak a few words, he motioned to me to take out his notebook, so that I could write down a few words for him. I wrote three words that he uttered, and he couldn’t say any more. The next day again, he asked me to write a few more words. This continued for a short time, and in the end, all these words came together to form a se’if kattan in the sefer Chazon Ish on Hilchos Shabbos. Although he knew that after a time he would be able to continue to write normally, nevertheless, he still practiced what he always taught: that one is not allowed to be idle from toiling in Torah.”

In time, Rav Nissim began studying in Yeshivas Lomza. At the advice of the Chazon Ish, when the new Ponevez Yeshivah opened, he began to attend the shiurim.

In 5711/1951, acting on the advice of the Chazon Ish, he married Rebbetzin Leah, a”h, the daughter of Harav Tzvi Hirsh Hakohen Kopshitz, zt”l, and great-granddaughter of Harav Yosef Chaim Sonnenfeld, zt”l, the Rav of Yerushalayim. The Rebbetzin, a devoted helpmate until her passing in 5775/2015, was a paragon of modesty, and invested herself in raising their children, and then dedicating herself to grandchildren, great-grandchildren, and even a fifth generation, many of whom are erudite Torah scholars and marbitzei Torah.

After his marriage, Rav Nissim continued learning in Kollel Ponevez. After the passing of his father, his uncle, the Steipler Gaon, zt”l, appointed him to serve as head of Kollel Chazon Ish in his father’s place. Subsequently, he began to serve as Rav of the Ramat Aharon neighborhood.

In addition to his harbatzas Torah in yeshivos and kollelim, Rav Nissim was one of the renowned morei horaah. In 5728/1968, he established a beis din in Bnei Brak, in his home. The beis din has several panels of Dayanim and addresses matters in many areas of halachah, including monetary matters, divorces, conversions and kashrus — namely the Otzar Beis Din during Shemittah, which particularly was known for its wine and grape juice.

Much of Rav Nissim’s Torah, shiurim and halachah rulings are presented in his sefarim, Chut Hashani, in 13 volumes of Orach Chaim and Yoreh De’ah, and the sefer Shiurei Hagra”n, which includes his shiurim on the Rambam’s halachos of terumos and maasros.

Rav Nissim fell ill about six years ago, but recently, his condition worsened. On Erev Yom Kippur he was hospitalized, and on Simchas Torah, his condition took a drastic turn for the worse. On Motzoei Yom Tov in Eretz Yisrael, he passed away, surrounded by family and talmidim.

After the hespeidim, Bnei Brak Mayor Rabbi Avraham Rubinstein announced that as per the wishes of the Rav, and in agreement with Gedolei Torah, Rav Karelitz’s son-in-law Rav Mendel Lubin would succeed him as the Rav of the Ramat Aharon neighborhood.

The levayah then proceeded to the Ponevez Cemetery, where the Rav was buried beside his Rebbetzin, a”h.