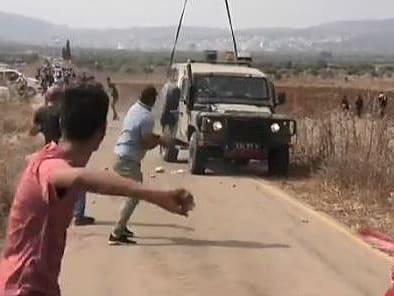 An Israeli Border Guard was injured Thursday as Arabs rioted in the Emek Shilo area in Shomron, as residents attempted to hold back a mob of Arabs that were advancing on their community. The officer was lightly injured. Rioting continue into Thursday night, and at one point an Arab mob surrounded an IDF jeep, pummeling it with rocks. No injuries were reported in that incident.

One Arab rioter and one Israeli resident of the Shomron were arrested, as the Arabs protested an alleged attempt by Israelis to set fire to olive trees. The Arabs were equipped with rocks and explosives, and attempted to reach several Jewish towns in the Shilo area. Residents marched out to prevent the invasion, and Border Guards and IDF soldiers attempted to keep the groups apart. After several hours, forces were able to break up the riot using water cannons, tear gas, and other anti-riot methods.

During the riot, an Israeli jeep that was attempting to leave the area crashed into a Red Crescent ambulance. No injuries were reported in that incident.

Overnight Thursday, security officials said they arrested 4 wanted security suspects in other areas in Yehudah and Shomron. The suspects were wanted for participating in rioting and throwing stones and firebombs that endangered Israeli civilians and IDF soldiers. Several of the suspects were also charged with belonging to Hamas. All were being questioned on their activities by security forces.