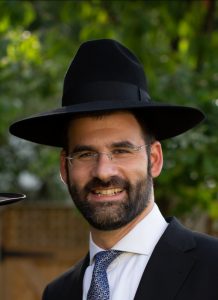 Rabbi Yoni Birnbaum has served as the Rabbi of the Hadley Wood Jewish Community since 2010. When Daf Yomi began a new cycle in August of 2012, Rabbi Birnbaum discussed with Rabbi Barry Lerer, then Rabbi of Barnet United Synagogue, located close by, the possibility of starting a Daf Yomi shiur in his shul. He undertook to deliver the shiur several times a week, and shares the duties with several other Rabbis to ensure that the shiur is given on a daily basis.

What is unique about this shiur and its participants?

Rabbi Birnbaum: The United Synagogue is a British union of shuls, comprised of 64 congregations and some 40,000 members. Most of the members do not have an extensive background in learning Gemara. Nevertheless, several members of Barnet shul had some experience in tasting Gemara learning, or had children who attended yeshivah, and they were open to the idea of joining a Daf Yomi shiur as the new cycle began. We have between 10 and 12 regular participants.

The success of the shiur has had a major impact on the participants as well as on the community at large. It has infused the community with a new spirit of Torah, and it has uplifted the Yiddishkeit of all involved.

Many members of the United Synagogue are what can be referred to as traditional Jews. Since the Daf Yomi shiur has been underway, the ruach of limud haTorah generated by it has spread throughout the Barnet community and indeed to the various shuls associated with the United Synagogue. There are now several shiurim and planned shiurim in various locations. Just the concept that there will be a Siyum haShas celebrated under its auspices has uplifted it tremendously.

When is the Daf Yomi shiur given?

Depending on the time of year, it is usually given after Minchah and Maariv, or after Maariv. The shiur lasts for approximately 50 minutes. On Shabbos and Sunday there is a different schedule.

Since many participants are not so experienced with learning Gemara, when we began learning Seder Kodshim we encountered difficulties. However, we persevered, and since they had already been learning for a few years and by now had a better grounding of how the Gemara works, we were able to get through it. I guess it is a brachah that we began with Brachos and not with Zevachim!
Many of the participants utilize the Artscroll edition, and the notes are extremely helpful in understanding the format of the sugya.

By learning Daf Yomi together with the members of the shiur, we have accumulated yedios in the entire Torah. For that alone it is worth the tremendous efforts we put in. Whenever we complete a Seder or one of the larger masechtos, we all feel a sense of accomplishment.

In addition, the fact that the United Synagogue has such a shiur is a major achievement. It is a sign of the advancement of limud haTorah within the entire organization, and there is a real sense of pride at introducing this concept to the entire union.

The United Synagogue is the largest synagogue body in Europe and is headed by the Chief Rabbi of the United Hebrew Congregations of the Commonwealth, Rabbi Ephraim Mirvis. The world-renowned London Beth Din and its Kashrus division are also under its auspices. So, by introducing this program of learning through Shas, it has promoted the importance of Torah learning throughout the greater London community and beyond.

How do you respond when a participant asks a good question?

The participants are very much engaged in the shiur, and they often ask excellent questions. We have seen that starting to learn later in life is not a barrier to learning well. Most times, I anticipate what might be asked, and I hope I can explain it well enough for them to understand. At times, they will look at the notes in the Artscroll Gemara to round out their comprehension of what we have learned.

As we began learning Maseches Me’ilah, we felt the excitement of nearing the end of our long journey. The fact that it comes after the arduous task of completing Seder Kodshim adds to the anticipation of completing Shas.

In London, there will be a considerable celebration, with a major siyum held in the Wembley Arena, a large venue which is part of the Wembley Stadium complex. The members of our shiur are very much looking forward to joining this siyum. We are also planning a separate special siyum for the United Synagogue, with the hope that it will serve as the springboard for added limud haTorah throughout the organization. Personally, I hope to join the event at MetLife Stadium in the United States as well. 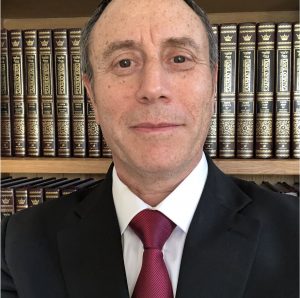 Dr. Jeff Kirsch is one of several Barnet Shul members who began learning Daf Yomi together with Rabbi Birnbaum a bit over seven years ago. Together with others who joined the group over time, they are now completing their first round of Shas, not a small accomplishment for anyone, and certainly not for this unique group.

What inspired you to begin learning Daf Yomi?

Dr. Kirsch: My children have attended yeshivah and seminary in Eretz Yisrael — my son learned under Harav Tzvi Kushelevsky, shlita, in Yeshiva Heichal HaTorah, and then in kollel, and my daughter at Midreshet Tehilla. I thought that by learning Gemara with Daf Yomi, I would get a taste of what they were involved in. When Rabbi Lerer suggested we begin a Daf Yomi shiur, it inspired me to take on some serious Gemara learning. By this time, it is a regular item on my schedule of the day. Each evening at Minchah and Maariv, I join with the rest of the group for 50 minutes to learn the daily Daf.

What are your biggest challenges when it comes to learning Daf Yomi?

When we began with Maseches Brachos, I found learning the Aggadita quite challenging. It took me quite a while to get used to this style of the Gemara. In addition, at the beginning, there was so many pieces of the Gemara which I had to absorb. Even in the first Mishnah, we had to know what terumah is, and what tumah and taharah are. So each bit of information had to be absorbed and understood.
When we began Seder Kodshim, which deals with the Temple service and is quite different, we no longer had to deal with these issues. Through the past seven years we have gained so much basic knowledge that has become second nature to us, since we have come across it so many times. Indeed, even pigul and nosar, which are distinctly Kodshim topics, have been discussed numerous times throughout Shas, and are already part of our lexicon at this point.

What are the most rewarding parts of learning Daf Yomi?

Firstly, being part of this group has created a fantastic bond among us. We have also come to appreciate so many things which in the past we may have taken for granted. As an example, when we build a sukkah, we were taught the dimensions and the various limitations and requirements it must have. But after learning the Gemara, we now have a greater understanding and comprehension of why it must be done just so. Even though learning Gemara does not guarantee that you will know the halachah, nevertheless you come to understand the underlying principles for it, and it greatly enhances your fulfillment of the mitzvah.

In addition, I now have a better comprehension of my conduct as a Jew. For example, tefillah is in place of korbanos, so when I daven, and especially when I recite the parts which deal with the sacrifices, I now have a greater awareness of what I am saying.

What role does it play in your family life?

I certainly would have been unable to accomplish this without the full backing of my wife. She is my biggest supporter and without her encouragement I would not be completing Shas. The conversations with my son, and son-in-law who have both learned in yeshivos in Israel for quite some time, can now center around what I am learning as we share ideas about the Daf. It also helps me to connect on a different level with my daughter and daughter-in-law. I’m also looking forward to the day when I can learn with my grandchildren as well!

How do you relate to the Maggidei Shiur?

There are several Rabbis who take turns delivering the shiur. Rabbi Birnbaum is one of them, and he is excellent at breaking everything down for us. We use whoever is available to give the shiur for us and most recently Rabbi Shmuel Landau, the new Rabbi of Barnet, has given shiurim.

Many of the younger generation from the Barnet kehillah, including our own children, have gone off to yeshivah and when they come back to visit, or during bein hazmanim, they teach us as well, which is amazing nachas for us.

I must add that with the Artscroll edition of the Gemara, we often use the rich notes to help us gain a better understanding of the sources and the meaning of the concepts we come across. It is an amazing and invaluable resource which adds clarity to our comprehension.

We are beginning to plan for the siyum, and we are hoping to attend the event in London in Wembley Arena near Wembley Stadium. I understand that Rabbi Birnbaum will be traveling to New York to join the grand siyum in MetLife Stadium. United Synagogue now has three or four different groups learning Daf Yomi, and I think we will all celebrate together with a special event, since it has been the catalyst for such an increase in limud haTorah.