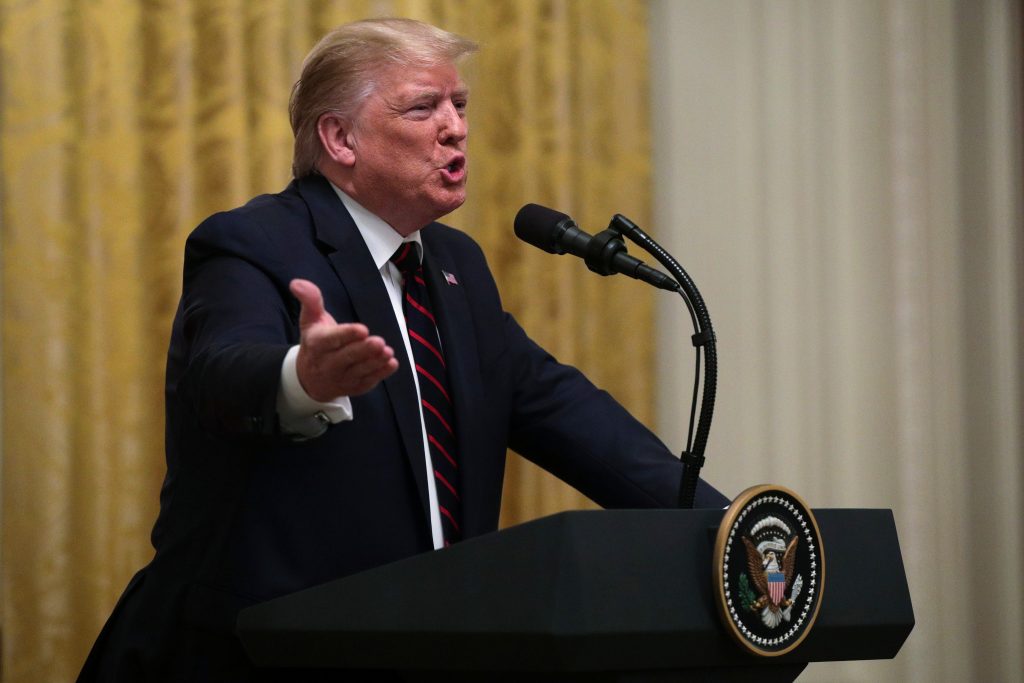 U.S. President Donald Trump said on Wednesday he had no problem if Russia helped Syria in a conflict with NATO ally Turkey and rejected criticism of his withdrawal of U.S. troops from Syria that exposed Kurdish allies, calling it “strategically brilliant.”

Trump’s decision to pull out American forces ahead of a Turkish offensive into northern Syria has shattered the relative calm there and he has been criticized for abandoning Kurdish militia who helped the United States defeat Islamic State terrorists in the region.

Washington’s hasty exit has created a land rush between Turkey and Russia – now the undisputed foreign powers in the area – to partition the formerly U.S.-protected Kurdish area.

Syrian troops accompanied by Russian forces entered the city of Kobani, a strategically important border city and a potential flashpoint for a wider conflict, reported the U.K.-based Syrian Observatory for Human Rights, which monitors the Syrian war.

Speaking to reporters as he met with Italian President Sergio Mattarella in the Oval Office and then later during a joint news conference, Trump said the Kurds were “not angels” and that it might be necessary for Russian-backed Syria and Turkey to “fight it out.”

In the Oval Office with Mattarella, Trump said, “Our soldiers are not in harm’s way – as they shouldn’t be, as two countries fight over land that has nothing to do with us.”

He also defended his decision to remove U.S. troops as part of his wider effort to bring Americans home from “endless wars,” despite being excoriated by members of his own Republican Party. U.S officials say, however, that those troops were expected to be repositioned in the region. Some of them could go to Iraq.

“I viewed the situation on the Turkish border with Syria to be for the United States strategically brilliant,” Trump said.

“Syria may have some help with Russia, and that’s fine. It’s a lot of sand,” he later said. “So you have Syria and you have Turkey. They’re going to argue it out, maybe they’re going to fight it out. But our men aren’t going to get killed over it.”

Acting last week after a phone call on Oct. 6 with Turkish President Tayyip Erdogan, Trump abruptly upended five years of U.S. policy with his decision to withhold protection from Syria’s Kurds and to withdraw first about 50 special operations forces and then the roughly 1,000 U.S. troops in northern Syria.

“This is a mistake worse than what (Barack) Obama did” when the former president withdrew U.S. troops from Iraq in 2011, Republican Senator Lindsay Graham, usually among Trump’s strongest supporters, told reporters.

The White House, fighting the domestic political damage, released a letter dated Oct. 9 by Trump to Erdogan that said: “Don’t be a tough guy” and “Don’t be a fool!”, urging him to halt the offensive and “work out a good deal” together.

Washington announced sanctions on Monday to punish Turkey, but Trump’s critics said the steps, mainly a steel-tariffs hike and a pause in trade talks, were too feeble to have an impact.

On Wednesday, U.S. Treasury Secretary Steven Mnuchin said sanctions included the entire ministries of energy and defense and could be broadened to others. Republicans in the House of Representatives plan to introduce sanctions legislation.

Trump dispatched some of his top aides, including Vice President Mike Pence and Secretary of State Mike Pompeo, to Turkey for emergency talks to try to persuade Ankara to halt its assault. Trump said he thought Pence and Erdogan would have a “successful meeting,” adding that if they did not, U.S. sanctions and tariffs “will be devastating to Turkey’s economy.”

A meeting between Trump and Republican and Democratic lawmakers was cut short – House Speaker Nancy Pelosi, the top congressional Democrat, said Trump had a “meltdown” over a 354-60 House vote condemning his Syria withdrawal. Republicans said Pelosi “stormed out.”

Dozens of Trump’s fellow Republicans joined the majority Democrats in the vote. The split underscored deep unhappiness in Congress over Trump’s action, which many lawmakers view as abandoning Kurdish fighters who had been loyally fighting alongside Americans to defeat Islamic State.

Trump has denied giving a green light to Turkey to attack the Syrian Kurds.

Erdogan has insisted there will be no ceasefire, and said he might call off a visit to the United States in November because of the “very big disrespect” shown by U.S. politicians.

He also denounced Washington for taking the “unlawful, ugly step” of imposing criminal charges against a Turkish state bank over charges it broke sanctions on Iran. Washington says the case is unrelated to politics.

Turkey’s assault has spawned a humanitarian crisis, with 160,000 civilians taking flight, a security alert over thousands of Islamic State terrorists abandoned in Kurdish jails, and a political maelstrom at home for Trump.

Syrian government forces, backed by Washington’s adversaries Russia and Iran in the more than eight-year civil war, have taken advantage of the power vacuum left by U.S. troops to advance into the largest swath of territory previously outside their grasp.

“I’m sorry that we are where we are,” the characteristically understated Senate Majority Leader Mitch McConnell said, telling reporters he hoped Pence and Pompeo “can somehow repair the damage” during their trip to Ankara.

On Tuesday, U.S. prosecutors unveiled charges against Turkey’s majority state-owned Halkbank over allegations it took part in a scheme to evade U.S. sanctions on Iran. Halkbank denies wrongdoing and called the case part of the sanctions against Turkey.

The Turkish advance, and Washington’s decision to evacuate its own forces, have brought the two biggest militaries in NATO close to confrontation on the battlefield. The United States has complained about Turkish artillery fire near its troops.

The Syrian Observatory said Russian troops had crossed the Euphrates River to advance to Kobani’s outskirts.

Lebanon’s al-Mayadeen TV reported that Russian-backed Syrian forces had also set up outposts in Raqqa, the one-time capital of Islamic State’s caliphate, which the Kurds captured in 2017 at the peak of their campaign with U.S. support.

Trump did not object to an agreement cut between Kurdish-led forces and the Syrian government to protect Syria from a Turkish offensive, Syrian Democratic Forces (SDF) Commander Mazloum Kobani said.