World Turkey Pushes Offensive in Syria, Despite Sanctions and Calls to Stop
World 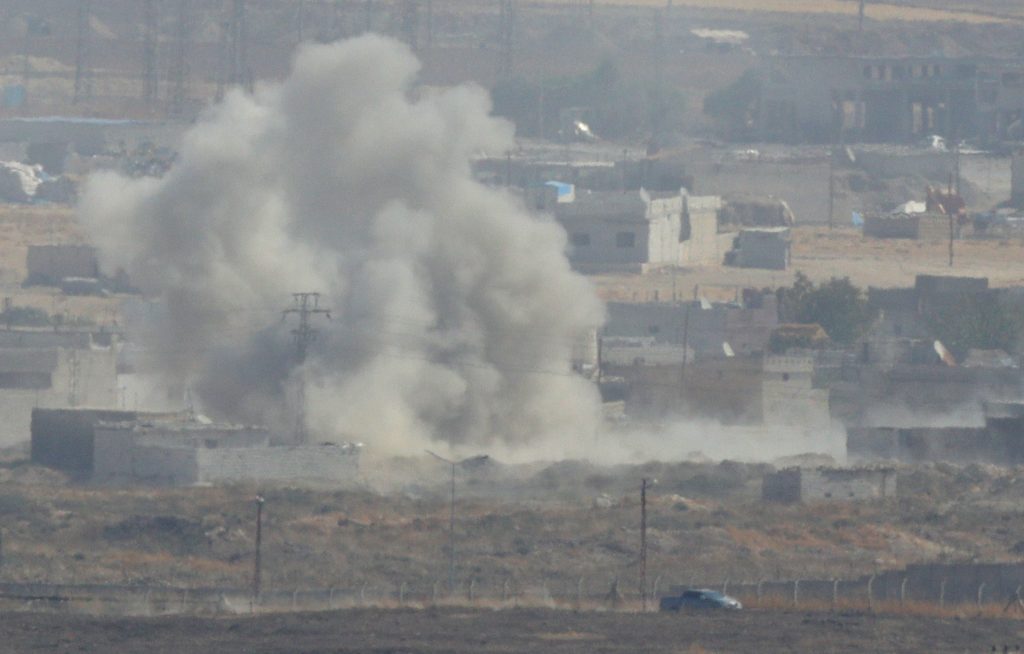 Turkey vowed to press ahead with its offensive in northern Syria on Tuesday despite U.S. sanctions and growing calls for it to stop, while Syria’s Russia-backed army moved on the key city of Manbij that was abandoned by U.S. forces.

“They are pressuring us to stop the operation. They are announcing sanctions. Our goal is clear. We are not worried about any sanctions.”

Erdogan said an attack from Manbij that killed one Turkish soldier was launched by Syrian government forces.

Russian and Syrian flags were flying from a building on the city outskirts and from a convoy of military vehicles.

President Donald Trump’s unexpected decision to withhold protection from Syria’s Kurds after a phone call with Erdogan a week ago swiftly upended five years of U.S. policy on Syria.

As well as clearing the way for the Turkish incursion, the U.S. withdrawal gives a free hand to Washington’s adversaries in the world’s deadliest ongoing war, namely Syrian President Bashar al-Assad and his Russian and Iranian allies.

The Syrian army deployments into Kurdish-held territory amount to a victory for Assad and Russia, giving them a foothold in the biggest remaining swath of Syria that had been beyond their grasp through much of its eight-year-old war.

The United States announced on Sunday it was withdrawing its entire force of 1,000 troops from northern Syria. Its former Kurdish allies immediately forged a new alliance with Assad’s government, inviting the army into towns across their territory.

A Reuters cameraman on the Turkish frontier reported heavy bombardment on Tuesday morning of the Syrian border town of Ras al Ain, where an SDF spokesman reported a battle going on.

“Vice President Pence will reiterate President Trump’s commitment to maintain punishing economic sanctions on Turkey until a resolution is reached,” the White House said in a statement.

After Trump announced a set of sanctions on Monday to punish Ankara, U.S. prosecutors hit Turkey with charges on the majority state-owned Halkbank for taking part in a multibillion-dollar scheme to evade U.S. sanctions against Iran.

A Turkish embassy official in Washington said the indictment did not contribute positively to the current state of U.S.-Turkey ties. Turkish and American officials had been in talks on the Halkbank case for at least a year.

A senior Trump administration official said Washington would threaten more sanctions to persuade Turkey to reach a ceasefire and halt its offensive.

Republican Senator Lindsey Graham, a loyal Trump supporter who has nevertheless been highly critical of the president’s troop withdrawal, said he would introduce a bill on Thursday to impose tougher sanctions on Turkey.

The measures announced on Monday – mainly a hike in steel tariffs and a pause in trade talks – were less robust than financial markets had anticipated, and Trump’s critics derided them as too feeble to have an impact.

The Turkish lira, which had fallen on the expectation of tougher U.S. measures, recovered after the sanctions were announced, as did its bond and stock markets, with traders noting that Trump had spared Turkish banks.

Bilateral trade between Turkey and the United States is relatively small – around a tenth the size of Turkey’s trade with Europe. Washington’s most effective form of economic leverage would be to hinder Turkey’s access to U.S. financial markets, a step Trump has so far avoided.

In a potentially more damaging blow, German carmaker Volkswagen said it was postponing a final decision on whether to build a 1 billion euro ($1.1 billion) plant in Turkey, citing concern over “current developments”.

Trump has defended his reversal of U.S. policy as part of a plan to extricate the United States from “endless” wars in the Middle East.

But his critics cast it as a betrayal of the Kurds, loyal allies who lost thousands of fighters as the principal ground force in Washington’s battle against Islamic State.

A senior U.S. defence official said the U.S. military would continue to combat Islamic State terrorists, who experts say could take advantage of the chaos to stage a resurgence.

“The intent is to reposition (U.S. forces leaving Syria) and use what assets and personnel we have available to continue the mission,” the official said.

However, without a partnership on the ground in Syria like the with the Kurdish-led Syrian Democratic Forces, any such U.S. efforts would almost certainly be limited.

The Kurdish YPG militia, the key component of the forces who fought Islamic State, is seen by Ankara as a terrorist group aligned with Kurdish separatist insurgents in Turkey.

Turkey says it aims to defeat the YPG and create a “safe zone” where millions of Syrian war refugees now in Turkey could be resettled.

The United Nations says 160,000 people have fled their homes as Turkish forces advance. The regional Kurdish administration puts the number of displaced at 270,000.

The U.N. Security Council will likely meet on Wednesday to discuss the latest developments in Syria, diplomats said, the second such session since Turkey began its offensive.

The U.N. Human Rights office said on Tuesday that Turkey could be held responsible for war crimes by fighters under its direction, potentially including the assassination of Hevrin Khalaf, a leading Kurdish politician killed on the side of a highway on Saturday by gunmen who posted the attack on the internet.

Turkish-backed fighters have denied blame for her murder.

Erdogan said Ankara was giving the world a chance to bring peace to the region.

“The international community missed its opportunity to prevent the Syrian crisis from pulling an entire region into a maelstrom of instability,” he wrote in the Wall Street Journal. “The European Union – and the world – should support what Turkey is trying to do.”