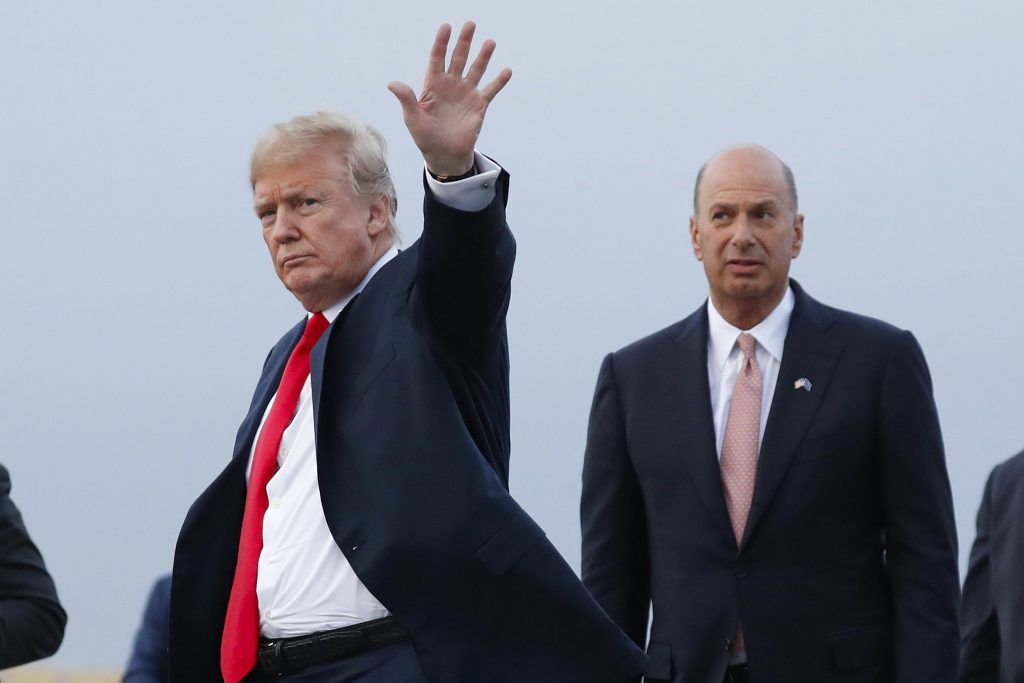 Gordon Sondland, the U.S. ambassador to the European Union, is prepared to tell lawmakers this week that top White House national security officials never personally raised concerns with him about his dealings with Rudy Giuliani in Ukraine, a person familiar with his account told The Associated Press on Tuesday.

That statement would be contrary to earlier testimony that Sondland’s actions set off alarms in the West Wing.

Sondland’s appearance is scheduled for Thursday, three days after former White House aide Fiona Hill testified that ex-national security adviser John Bolton was so disquieted by the back-channel Ukraine activities that he referred to Giuliani as a “hand grenade who is going to blow everybody up.” Hill recounted that Bolton also said he was not part of “whatever drug deal Sondland and Mulvaney are cooking up.” That’s a reference to White House chief of staff Mick Mulvaney.

Sondland is appearing under subpoena before House committees conducting an impeachment inquiry of President Donald Trump.

He and several other envoys, along with Giuliani, were part of discussions in the summer and fall to offer Ukraine’s political leaders a White House visit in exchange for a commitment to conduct investigations sought by Trump, including into Burisma, an energy company with ties to the son of Democratic rival Joe Biden.

His testimony was already highly anticipated, after Democrats released text messages between Sondland and other ambassadors discussing the possibility of Ukraine securing a visit with Trump. But the intrigue is even higher now after Hill’s testimony placed Sondland at the center of wide-ranging effort outside normal diplomatic channels to pressure Ukraine into politically charged investigations.

Sondland is expected to defend himself by asserting that he was parroting the president’s words when he denied the existence of a quid pro quo with Ukraine, and that he did not associate the energy company with the Biden family.

Hill detailed Bolton’s concerns to lawmakers during testimony Monday and told them that she had at least two meetings with National Security Council lawyer John Eisenberg about the matter at Bolton’s request, according to a person familiar with the testimony who requested anonymity to discuss the confidential interview.

The New York Times reported that Bolton had a tense encounter with Sondland on July 10 and instructed Hill to notify Eisenberg about Sondland’s work with Giuliani and Mulvaney.

But the person close to Sondland said Tuesday that neither Bolton nor Hill raised any concerns with him.

To bolster his account that officials did not sound the alarms to him about the Ukraine activities, Sondland is prepared to describe the aftermath of a meeting he had with Energy Secretary Rick Perry and Kurt Volker, the former special envoy to Ukraine.

One day after the meeting, Perry summarized the discussion to Bolton and recounted internal deliberations within the administration about when to organize the call between Trump and Ukraine President Volodymyr Zelenskiy, according to a readout of the communication described by a person who insisted on anonymity to discuss private conversations.

That call, now the basis of a whistleblower complaint, took place on July 25 and involved Trump repeatedly prodding Zelenskiy to investigate Biden’s son, Hunter. At the time, the Trump administration was withholding hundreds of millions of dollars in military aid from Ukraine.

Perry said that he, Volker and Sondland had pushed to hold the call sooner than later to show support for Ukraine and to develop the relationship with the two countries, with the expectation that there would be unimpeded investigations. But he told Bolton that other staff wanted to wait until there was something more substantive to talk about. Bolton did not respond with any concerns about Giuliani or the discussions, the person said.

Sondland, who had agreed to be interviewed without a subpoena, was to have testified last week as part of the impeachment inquiry. But the White House blocked him, with Trump tweeting that “he’d be testifying before a totally compromised kangaroo court.” House Democrats quickly subpoenaed Sondland, and he agreed to comply.

On Thursday, he is expected to be asked about text messages that show him and two other U.S. diplomats acting as intermediaries as Trump urged Ukraine to investigate the 2016 U.S. election and Burisma, the company linked to Biden’s son, Hunter.

One of the texts shows Sondland addressing another envoy’s concerns about whether military aid was being withheld in exchange for the investigations by saying the diplomat, William “Bill” Taylor, was “incorrect about President Trump’s intentions. The president has been crystal clear no quid pro quo’s of any kind.”

Sondland is expected to say that the reassurance about no quid pro quo was based solely on what Trump told him in a phone call before the text. He is also expected to say that he did not associate Burisma with the Biden family and viewed the emphasis on investigating corruption as part of a goal shared broadly across the administration.

Sondland, a wealthy hotelier and philanthropist, took an unconventional path to the diplomatic post and to supporting Trump himself. He initially backed Jeb Bush during the Republican primary, but ultimately donated $1 million to Trump’s inaugural committee.