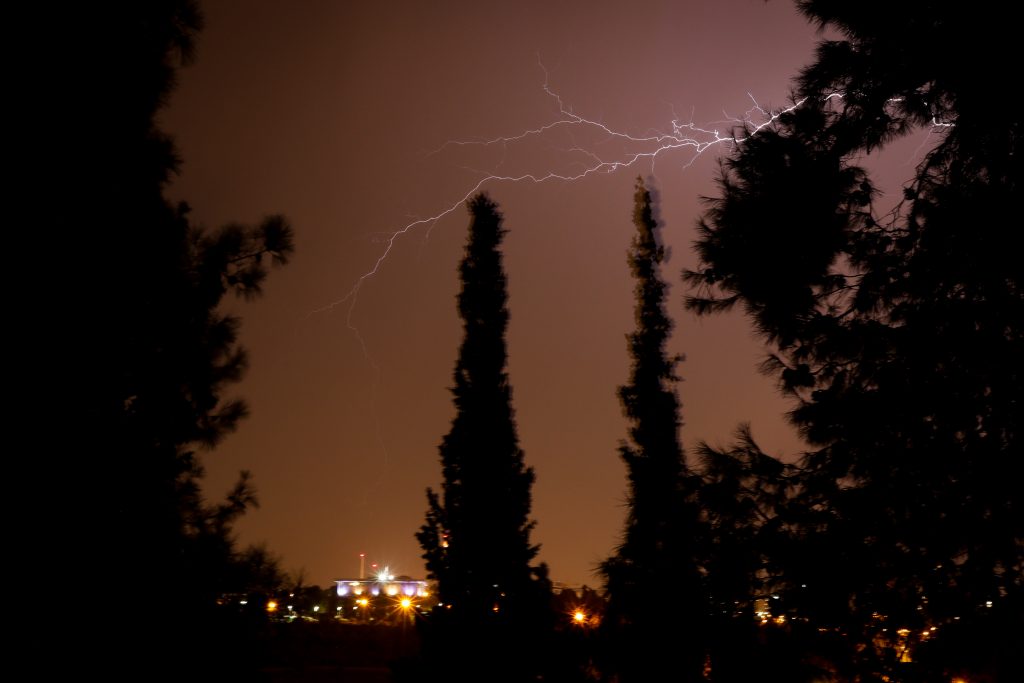 The first day of Chol Hamoed in Israel was marked by heavy heat – followed by a wild thunderstorm that sent sukkahs in many parts of the country flying. Lightning from the storm was responsible for the injury of five people – with one in critical condition – when they were struck while bathing in the Mediterranean.

The incident occurred at Zikim beach near Ashkelon. A 20-year-old male was taken to Barzilay Hospital in the city in critical condition, while a 30-year-old female was treated for serious wounds. Three others were treated for moderate to light wounds. Three of the victims were members of the Chazut family, a chareidi family from Beer Sheva.

The five were victims of the very unusual weather that hit Israel over the last several days. Both Monday, Yom Tov Sukkos, and Tuesday, the first day of Chol Hamoed in Israel, were marked by excessive heat, with temperatures approaching and breaking 100 degrees Fahrenheit in many locations. Winds were very strong in many locations by Tuesday morning, and by Tuesday afternoon the rains moved in – accompanied by lighting and thunder, and dumping copious amounts of moisture on many locations.

Images from around the country showed soaked sukkahs with schach strewn about. Cities around the Kinneret closed down beaches, and the Jewish National Fund declared many trails in national parks off limits. Meanwhile, power outages and brownouts were the norm in many locations during the storm and afterwards, as power lines that had not yet been “winterized” were affected by the heavy rain. Israel Electric Company crews were called in on an emergency basis to make repairs. A bridge next to the Tzemach Junction on the Kinneret coast collapsed, and Baruch Hashem there were no injuries, but police closed the area down for several hours.

One positive effect of the storm was the breaking of the heat, with temperatures falling about 20 degrees in the space of an hour or so Tuesday afternoon. Wednesday is expected to be warmer than usual for mid-October, but not as hot as the previous two days. With that, the weather will remain volatile, forecasters said, and flash-flooding in low-lying areas is a possibility on Wednesday. The weather should moderate significantly Thursday, with temperatures falling and cooler and more humid conditions prevailing.