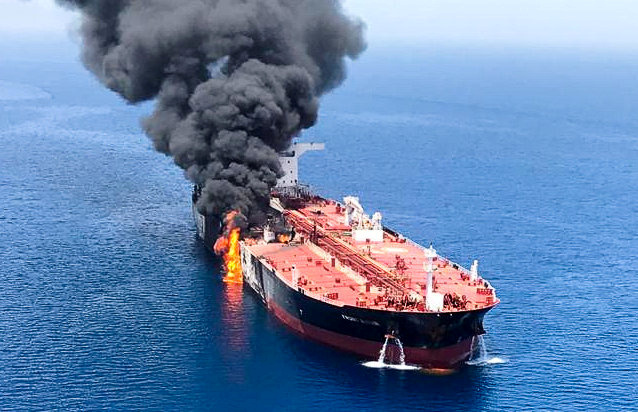 Below is a timeline of incidents in the Gulf region since May:

May 10 – The U.S. Maritime Administration warns of possible Iranian attacks on shipping in the Gulf.

May 12 – Four ships, including two Saudi oil tankers, are attacked in the Gulf just outside the Strait of Hormuz, a major oil shipping route. U.S. officials pin the blame on Iran, a charge Tehran denies.

May 14 – Saudi Arabia said armed Houthi drones struck two oil pumping stations in the kingdom, causing a fire which was contained and minor damage at one pump station, but did not disrupt oil output or exports. Saudi Aramco said it temporarily shut the East-West pipeline, known as Petroline, to evaluate its condition.

May 21 – A Houthi drone struck an arms depot in Saudi Arabia’s Najran airport near the Yemeni border, causing a fire. The Saudi-led military coalition said a civilian facility in Najran Province was attacked with an explosive-laden drone.

June 19 – The Houthis launched a projectile targeting a power transformer station near a desalination plant in Shuqaiq in southern Saudi Arabia. The strike led to a small fire that was quickly doused and did not impact operations.

June 23 – The Saudi-led military coalition said the Houthis launched an attack on Abha airport, killing one person and wounding 21 others.

July 18 – The United States said USS Boxer destroyed an Iranian drone in the Strait of Hormuz after it threatened the U.S. Navy ship. Iran denied it has lost a drone.

Aug. 15 – Gibraltar freed the Grace 1, renamed the Adrian Darya 1, after receiving assurances from Tehran that the ship would not discharge its oil in Syria. On Sept 8 Iran said it unloaded its cargo somewhere on the Mediterranean coast. On Sept. 11 Iran said the vessel had been sold at sea to a private company and denied Tehran had broken the assurances.

Sept. 14 – The Houthis claim responsibility for drone attacks on Saudi Aramco plants in Abqaiq and Khurais. The plants lie in the heartland of Saudi Arabia’s oil industry, including the world’s biggest petroleum processing facility.