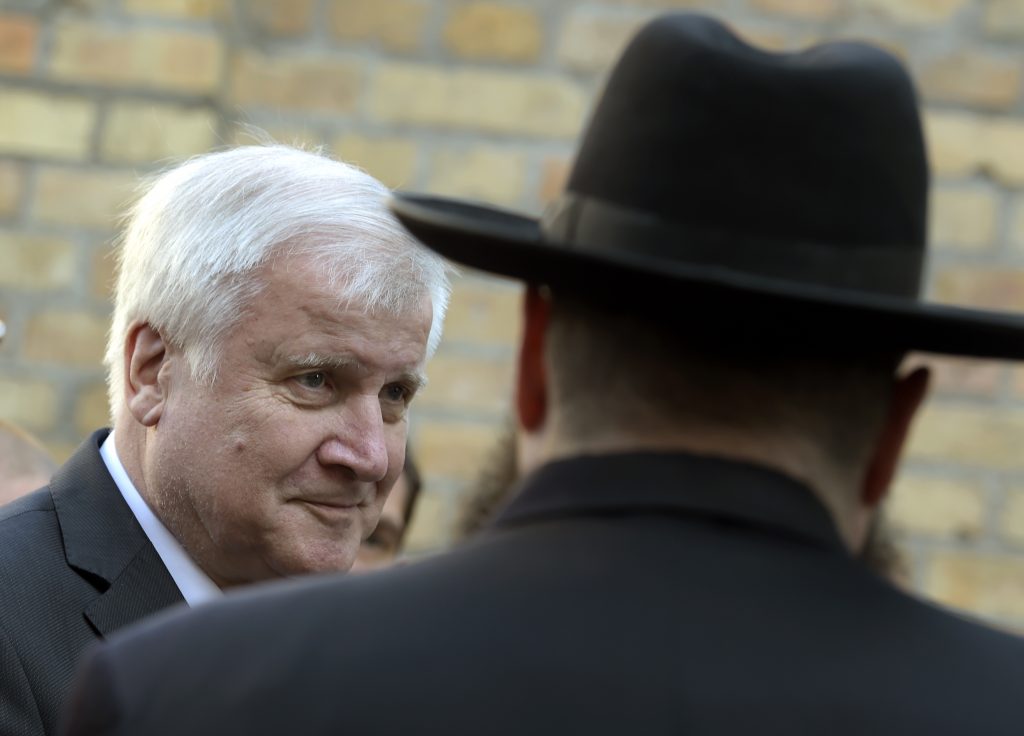 Two people were killed by a gunman who planned a Yom Kippur attack on a shul in the German city of Halle, but miraculously, his targets – the many worshipers inside – were spared, protected by a simple door which would not give way.

Rabbi Yosef (Roman) Remis, who serves as the chazzan in Halle and is a director of outreach activities for the Lauder Foundation, was one of some 80 people in the shul at the time of the shooting. A day later, still exhausted and overwhelmed by events, he still had not fully processed how the congregation was saved.

“It’s absolutely amazing that no one from the shul was hurt,” he told Hamodia. “There are no words to describe it, and I still cannot comprehend it. So many nissim happened.”

The shul was nearing the end of krias haTorah of Shachris when they heard a loud boom outside.

“At first we didn’t know what it was. We thought maybe it’s firecrackers or something like that. Then we saw smoke coming through the door,” said Rabbi Remis.

Several leaders of the congregation went to look at the screen connected to a security camera outside and when they saw the attacker fatally shoot a woman in the street, they yelled that all those in the building were to leave the sanctuary and take refuge in another room. At the same time, they locked and barricaded the front door with chairs.

The shooter, who has since been identified as 27-year-old Stephen Balliet, came dressed in combat gear, armed with at least one gun and several homemade explosive devices to carry out what he hoped would be a mass attack on Jews. A 35-minute video “livestreamed” on the internet his largely failed attack as well as a diatribe, delivered largely in English, against what he perceived as several social ills, saying that Jews are “the root of all problems.”

While beginning his attempted assault on the shul, Balliet shot a woman passing by who seemingly confronted him. He then shot the door several times and placed one of his explosive devices in it, but the entranceway, which is not a special security device, held strong. Seemingly frustrated, Balliet threw several homemade Molotov cocktails at the building and one into the cemetery adjoining it. Yet they fell on grass, with not enough impact to explode.

Balliet then drove to a nearby Turkish restaurant, seemingly in search of Muslim immigrants, who were another object of his filmed tirade. There he shot and killed one man, before being apprehended after a gun battle with police.

Meanwhile, once it was clear that the shooter had left the area, the congregation finished krias haTorah and continued the tefillos. Shortly after they finished Mussaf, Max Privorozki, the community’s president, who served on the board of the Union of Traditional Jews in Germany, was informed by police that the congregation was going to be evacuated so that the premises could be checked for additional explosive devices.

Some of those who witnessed the shooting on the security screen were brought to police headquarters for questioning, and others were brought to a local hospital, where they met with trauma specialists. The group also were able to bring machzorim and a shofar, and ultimately recited Minchah and Ne’ilah in the hospital.

Halle is a city of about 230,000 people in the eastern German state of Saxony-Anhalt. Its small Jewish community is almost entirely made up of immigrants from the former Soviet Union and their families. Several of those present at the shul were guests who traveled there to strengthen the congregation for Yom Kippur, among them nearly 10 Americans currently living in Berlin.

In the wake of the attack, Dr. Josef Schuster, the president of Germany’s central Jewish communal organization, condemned the lack of government-provided security at the site.

“I am convinced that if there had been police protection there, in all probability the assailant would not have been able to attack a second site,” he said.

Many governments in Western Europe have provided security to Jewish institutions for some time amid rising anti-Semitism. In Germany, the matter is left to states. While larger communities in Berlin and Munich do have ample security provided, Saxony-Anhalt has not taken that move. Yet amid an outcry for international Jewish organizations and several leaders of Germany’s federal government to take greater steps to protect Jewish life in the country, that seems likely to change soon.

“People are definitely anxious,” Rabbi Joshua Spinner, the Berlin-based executive vice president and CEO of the Lauder Foundation told Hamodia. “I feel strongly that society should not be judged by the actions of a single lunatic, but by what they do in response, and right now, providing security to the Jewish communities that don’t yet have it seems like it should be the first move.”

For most of the past decade, rising anti-Semitism in Western Europe has affected France and Belgium. Yet, in more recent years there has been a significant spike of incidents in Germany as well. While some rhetoric is rooted in rising far-right populism, most violent attacks and vandalism have been traced to Muslim immigrant populations.

“I think it really scares people and if they want people to feel safe coming to shul, the German government will have to take some serious steps about security.”

Balliet’s video streaming of his attempted rampage and monologue, as well as a written manifesto are reminiscent of several recent mass shootings, especially one at a mosque in New Zealand this past March. Some were quick to link the attack to rising ultra-nationalist leanings in Germany. However, several experts on extremism said that his choice of English and recitation of populist themes indicated otherwise.

“[Balliet] wasn’t trying to impress local neo-Nazis…his ‘audience’ was on message forums online that have previously cheered on far-right killers,” said Peter Neumann, a terrorism expert at King’s College London in a statement.

The scant information that has been reported about the killer coupled with his own filmed statement paint him as a frustrated loner whose social circle mostly existed on-line.

Rabbi Spinner said that it seems extremism on social media likely played a role in Balliet’s actions, but also said blamed “a broader circle of tolerance for nationalist, angry rhetoric.”

Reflecting on Yom Kippur’s events, he said that Halle’s congregation’s salvation was nothing short of “a miracle.”

“This was u’nesana tokef in action,” he said referring to the Rosh Hashanah and Yom Kippur prayer describing the Divine judgment between life and death. “It’s terrifying to think of what could have happened if [the attacker] had gotten in the door.”