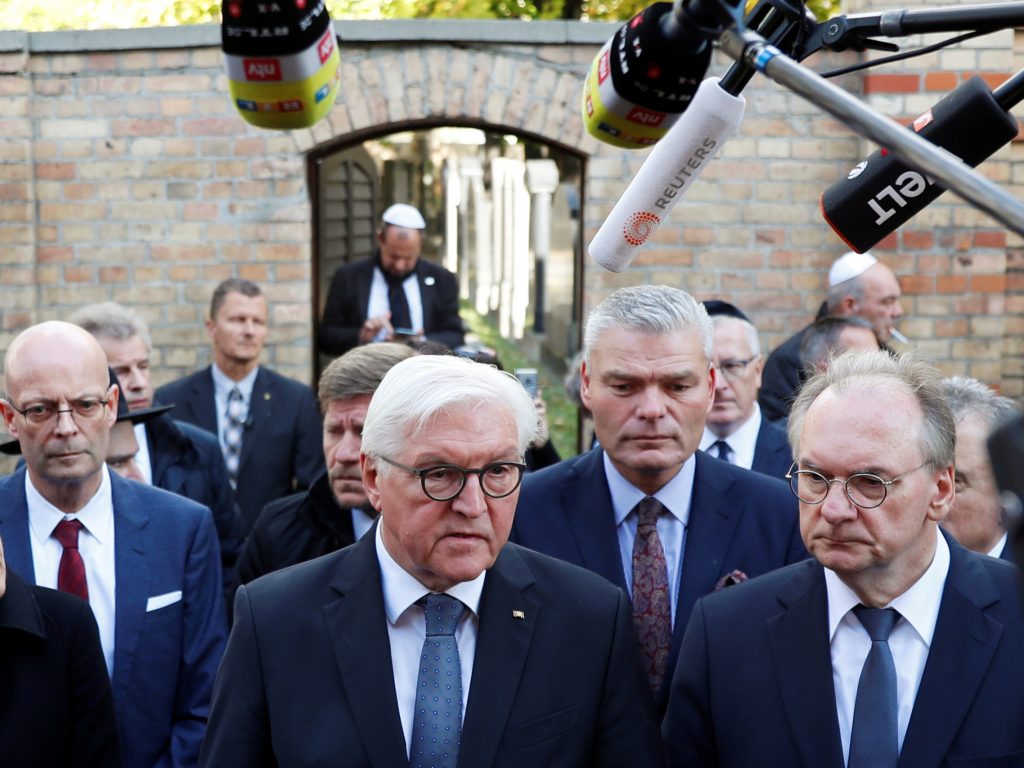 Germans need to stand together against extremist violence and protect Jewish life, President Frank-Walter Steinmeier said on Thursday after visiting a synagogue where a gunman began an attack a day earlier, on Yom Kippur, in which he later killed two people.

“Today is a day of shame and disgrace,” Steinmeier said outside the synagogue in the eastern German city of Halle.

“I’m very sure the overwhelming majority of this society in Germany wants Jewish life to be part of this country. … We must stand together long term against violence like we experienced here yesterday. We must protect Jewish life.”

Meanwhile, questions are being raised about police response after the attack on a synagogue after a gun-wielding terrorist tried unsuccessfully to enter the synagogue.

The head of Germany’s Jewish community, Josef Schuster, called the absence of police guards as “scandalous” as members of the synagogue described waiting behind locked doors for the police to arrive, which took more than 10 minutes.

The head of the Halle community, Max Privorozki, said Thursday, “I thought, ‘that door will not hold,'” as the attacker fired shots outside. Police union head Oliver Malchow said the response time showed “how thin police coverage is” and added that the wait “was especially long for the people who were in the synagogue.”

In a video of more than 30 minutes that the attacker livestreamed from a helmet camera, the perpetrator was heard cursing his failure to enter the synagogue before shooting dead a woman passer-by in the street and a man inside a nearby kebab restaurant.

Two other people were injured but regional broadcaster MDR said their condition was not critical.

Police said they had detained one person, identified by the magazines Spiegel and Focus Online as a 27-year-old German, Stephan B. His full name cannot be published under German privacy laws.

Schuster said that while it was normal practice in his experience for all synagogues to have police guards while services were being conducted inside, this appeared not to be the case in the state of Saxony-Anhalt, where Halle is located.

However, the head of Germany‘s police union was skeptical about the feasibility of providing that level of protection.

“We’d have to guard every synagogue, every church, every mosque, every religious place in Germany around the clock, so I don’t know if this was a mistake or if this really couldn’t have been foreseen,” Oliver Malchow told public media.

In the event, the synagogue’s solid locked gates and high walls provided ample protection against the attacker’s seemingly improvised weapons.

Malchow also defended police in Halle who took 15 minutes to reach the synagogue, saying they could only respond after receiving reports about the incident, and that armored units often had to come from greater distances.

“This shows how thin the level of police coverage is,” he said. “Nobody is holding back … it probably wasn’t possible to be quicker.”

Chief Rabbi Pinchas Goldschmidt, president of the Conference of European Rabbis (CER), also addressed the lack of security at the synagogue in his statement.

“Today’s incident is the first time in a long time that Jews have been killed by far right extremists in Germany,” the rabbi said. “This should be a wakeup call for all those who follow the extreme Right in Germany and across Europe.

“Furthermore, it is shocking to understand from the Central Council of Jews in Germany that the synagogue was not adequately protected. This should not and cannot happen. Governments must deliver on their promise of never again.”