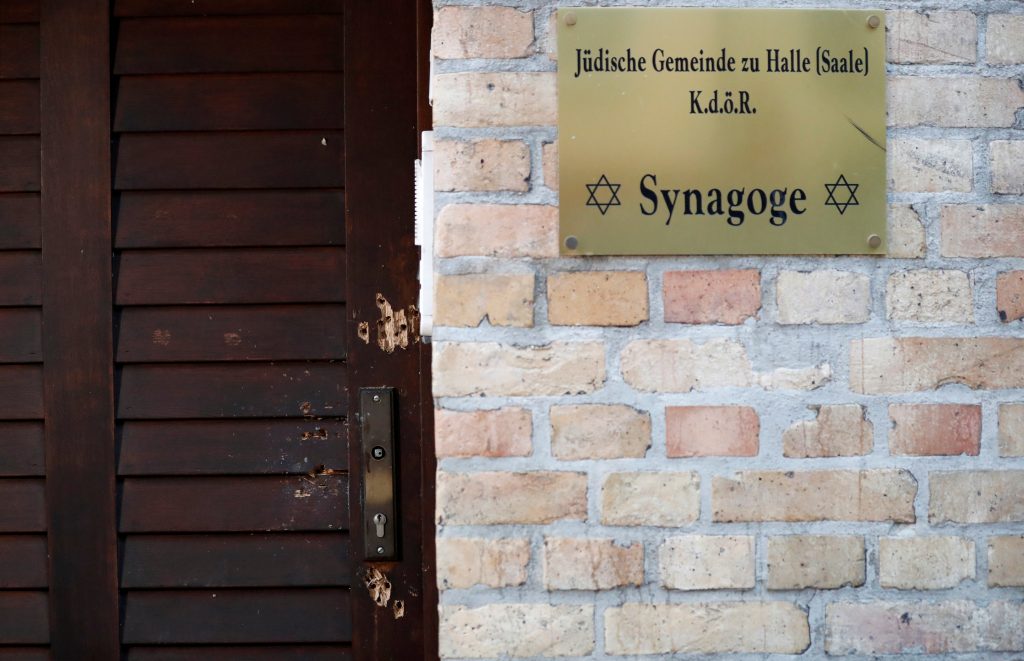 The suspect in an attack on a German synagogue on Yom Kippur had around four kilograms (nearly nine pounds) of explosives in his car and wanted to carry out a massacre, Germany’s top prosecutor said. Many questions remained about how the man was able to get hold of the weapons he used in the assault, in which two people outside the building were killed.

As officials sought to reassure an unsettled Jewish community and address concern about rising right-wing extremism, Germany’s president visited the scene of the attack in Halle and urged his nation to stand up for its Jewish compatriots.

The terrorist — a German citizen identified by prosecutors as Stephan B. — tried but failed to force his way into the synagogue as around 80 people were inside. He then shot and killed a woman in the street outside and a man at a nearby kebab shop. He is now in custody.

“What we experienced yesterday was terror,” said Peter Frank, the chief federal prosecutor. “The suspect, Stephan B., aimed to carry out a massacre in the synagogue in Halle.”

Frank said his weapons were “apparently homemade” and the explosives in the car were built into “numerous devices.” The suspect, who livestreamed the attack on a popular site while ranting in English about Jews and posted a “manifesto” online before embarking on it, “wanted to create a worldwide effect” and encourage others to imitate him, the prosecutor added.

The gunman is suspected of two counts of murder, nine of attempted murder and other offenses, Frank said. His apartment was searched and investigators were sifting evidence, but “we face a lot of questions,” he added.

Those include how the suspect was radicalized, how he decided to carry out the attack, how he got hold of the material to build weapons and explosives, whether he had supporters or whether anyone else encouraged him or knew about his plan, he said. Prosecutors will have to sift through his communications and his activities on the darknet, a part of the internet hidden from public view.

Officials didn’t give details of the victims, who were killed outside the synagogue and in a nearby kebab shop.

Synagogues are often protected by police in Germany and have been for many years amid concerns over far-right and Islamic extremism. There has been rising concern lately about both anti-Semitism and right-wing extremism in the country.

Germany’s domestic intelligence agency says the number of anti-Semitic acts of violence rose to 48 last year from 21 the previous year. It also said the number of far-right extremists rose by 100 to 24,100 people last year, with more than half of them considered potentially violent.