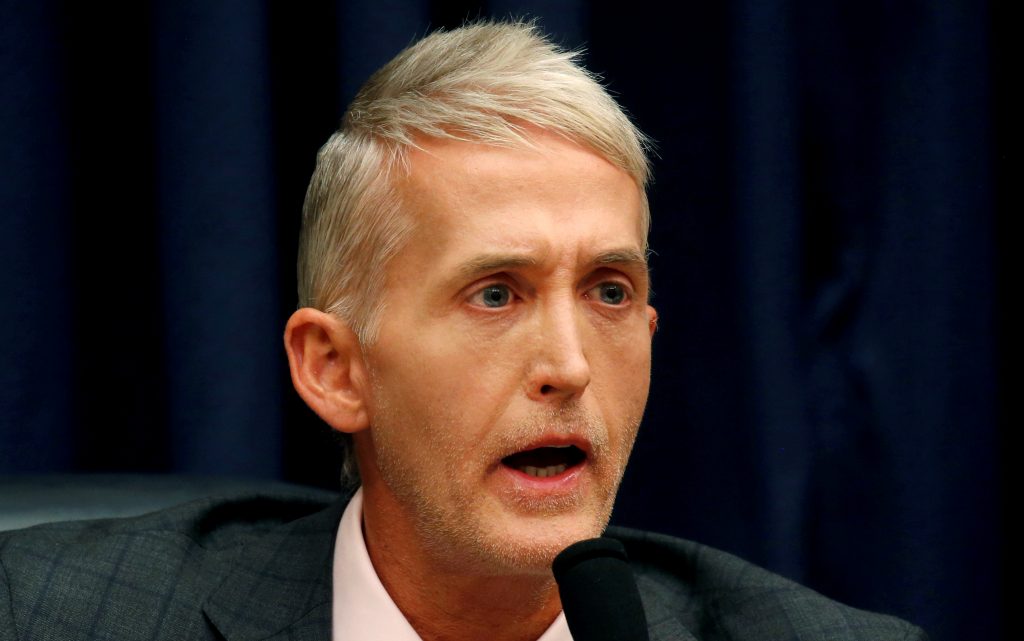 It is also a trip through the looking glass for the South Carolina Republican, who will go from demanding information on Congress’ behalf to backing a White House that said it would refuse to cooperate with what it called an “illegitimate, unconstitutional” congressional inquiry.

The 55-year-old former federal prosecutor is best known for pushing relentlessly for information on Obama administration officials, including Secretary of State Hillary Clinton’s role in responding to the 2012 attack on a U.S. government compound in Benghazi, Libya, that killed four U.S. officials.

“The notion that you can withhold information and documents from Congress no matter whether you are the party in power or not in power is wrong,” Gowdy said as a House committee in 2012 voted along party lines to hold a different Obama administration official in contempt of Congress.

“Respect for the rule of law must mean something, irrespective of the vicissitudes of political cycles.”

Gowdy spent eight years in the House of Representatives, before deciding not to run for re-election in 2018. During his congressional career, he garnered consistently high favorable ratings – 100% in 2013 – from the American Conservative Union.

Even before his new position was announced, some detractors were accusing him of joining a legal team whose aim is to stifle Democrats’ investigation of the president, even though he fought for full White House disclosures while in Congress.

A House Democratic aide said Gowdy would be under pressure from Democrats to square his prior aggressive assertion of congressional prerogatives with Trump’s stonewalling.

Jay Sekulow, a lawyer for Trump, praised Gowdy in announcing his hiring.

“I have known Trey for years and worked with him when he served in Congress,” Sekulow said in a statement. “His legal skills and his advocacy will serve the President well. Trey’s command of the law is well known and his service on Capitol Hill will be a great asset as a member of our team.”

When the Benghazi panel was created by Republicans who then controlled the House, Democrats protested that it was formed after several other congressional panels found no deliberate wrongdoing by Obama administration officials in responding to the attack that killed U.S. Ambassador to Libya Christopher Stevens.

Democrats also accused Republicans of using the panel as a forum to sour public opinion against Clinton who was preparing to run for president in 2016.

At the time, Gowdy conducted a series of high-profile hearings as part of an extended investigation that focused at times on Clinton’s use of a private email server while she was secretary of state – an issue that Trump also spotlighted during his 2016 presidential campaign against Clinton.

In the end, Gowdy’s Benghazi panel issued an 800-page report that had the backing of seven Republicans on the committee, while four Democrats opposed it.

The report criticized Clinton, saying she and her staff showed a “shameful” lack of response to congressional investigators, despite her 11 hours of contentious testimony to the committee.