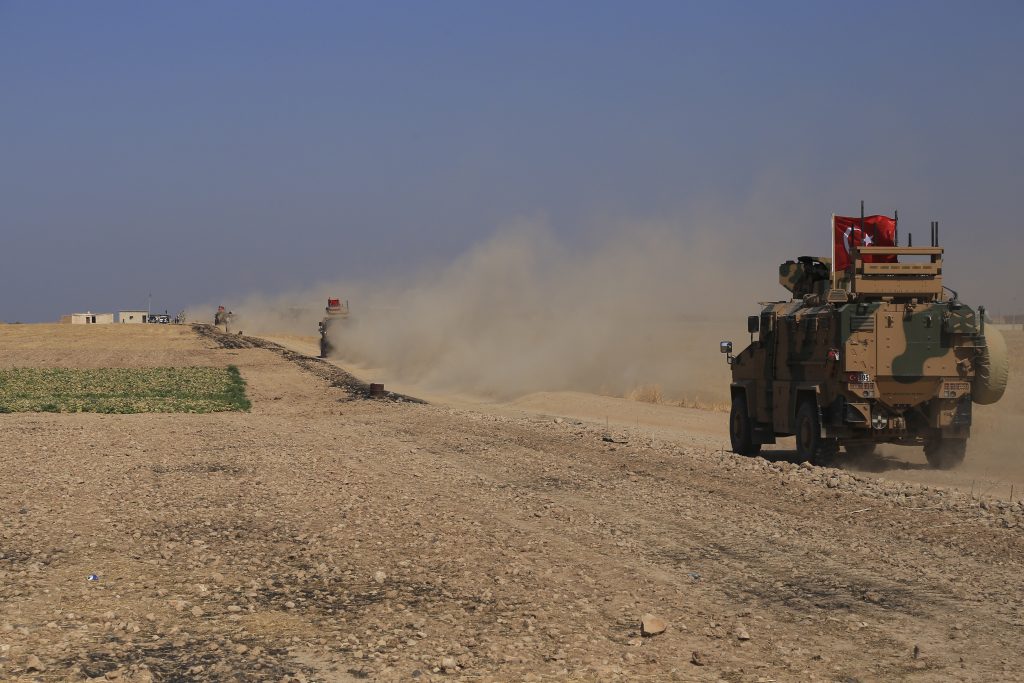 President Donald Trump is defending his decision to pull troops from northern Syria, clearing the way for an expected Turkish assault, and essentially abandoning Kurdish fighters who fought alongside American forces in the yearslong battle to defeat the Islamic State terror group.

Following the late-Sunday White House announcement, Trump said that “The Kurds fought with us, but were paid massive amounts of money and equipment to do so. They have been fighting the Turks for decades.”

Trump says it’s now time to bring U.S. troops home, adding that “the United States was supposed to be in Syria for 30 days, that was many years ago. We stayed and got deeper and deeper into battle with no aim in sight. When I arrived in Washington, ISIS was running rampant in the area. We quickly defeated 100% of the ISIS Caliphate.”

As for the thousands of captured Islamic State terrorists, Trump said that “the United States will not hold them for what could be many years and great cost to the United States taxpayer. Turkey will now be responsible for all ISIS fighters in the area captured over the past two years.”

Sen. Lindsey Graham (R-S.C.) criticized the move as “impulsive,” adding that it could undo U.S. gains in the region and give ISIS fighters a “second lease on life.”

Syria’s Kurds accused the U.S. of turning its back on its allies and risking gains made in the fight against IS.

Turkey considers the U.S.-allied Syrian Kurdish fighters terrorists who are allied with the Kurdistan Workers’ Party, or PKK, which has waged an insurgency against Turkey for 35 years.

“Areas liberated from PKK will have services provided by Turkey, rather than enduring the occupation by a terrorist militia,” said Fahrettin Altun, communications director for Turkish President Recep Tayyip Erdogan.

Abdulkarim Omar, who acts as foreign minister for the Syrian Kurds, said that U.S. troop withdrawal from the border will have “catastrophic consequences” because Kurdish-led forces would be preoccupied with defending the border, instead of protecting detention facilities or the crowded al-Hol camp which houses over 73,000 people, many of them IS families and supporters.

Omar called on the international community to work to reverse President Trump’s decision or stop the Turkish offensive.

Ulrike Demmer, a spokeswoman for German Chancellor Angela Merkel, said on Monday that Germany is aware of the “special security policy situation” that Turkey faces on its border. But she cautioned that successes against the Islamic State group, which she noted were achieved in significant part by Syrian Kurdish forces with international support, “must not be endangered.”

Demmer said that a unilateral military intervention “would lead to a further escalation in Syria and contribute to a continued destabilization of the country.” She said it would also have negative security policy and humanitarian consequences.

A senior U.N. envoy for Syria says the fighting sides should “put people first” amid concerns that a pullback by U.S. troops along the Turkey-Syria border will trigger an invasion by Turkish forces into a densely populated area.

Panos Moumtzis, from the U.N. humanitarian aid coordination agency, said he hopes that “military engages with military” — and not civilians — if any such assault occurs.

He said the U.N. Office for the Coordination of Humanitarian Affairs is preparing for the worst but hoping for the best. OCHA is offering to help indicate where clinics, schools, water points, markets or residential areas are located to help the forces on the ground avoid civilians.

“The safe zone has two aims: to secure our borders by clearing away terrorist elements and to achieve the return of refugees in a safe way,” Kalin said.

“Turkey is powerful and determined,” he added.

Turkey says it wants to settle up to 2 million Syrian refugees in the zone. It currently hosts 3.6 million Syrians sheltering from the more than eight-year conflict in their homeland.

After the Erdogan-Trump phone call, the Turkish presidency said the two leaders had agreed to meet in Washington next month.

It said that during the call Erdogan had expressed his frustration with the failure of U.S. military and security officials to implement the agreement between the two countries.

The White House statement said “Turkey will now be responsible for all ISIS fighters in the area captured over the past two years,” as France, Germany and other European nations from which they came refused U.S. requests to take them back.

The NATO allies agreed in August to establish a zone in northeast Syria along the border with Turkey.

Turkey says the United States, which supports the Syrian Democratic Forces (SDF), a YPG-led force that defeated Islamic State terrorists in Syria, has moved too slowly to set up the zone. It has repeatedly warned of launching an offensive on its own into northeast Syria, where U.S. forces are stationed alongside the SDF.

The two countries are also at odds over how far the zone should extend into Syria and who should control it. Turkey says it should be 30 km (19 miles) deep.

Ties between the allies have also been pressured over Turkey‘s purchase of Russian S-400 defense missiles and the trial of local U.S. consulate employees in Turkey.