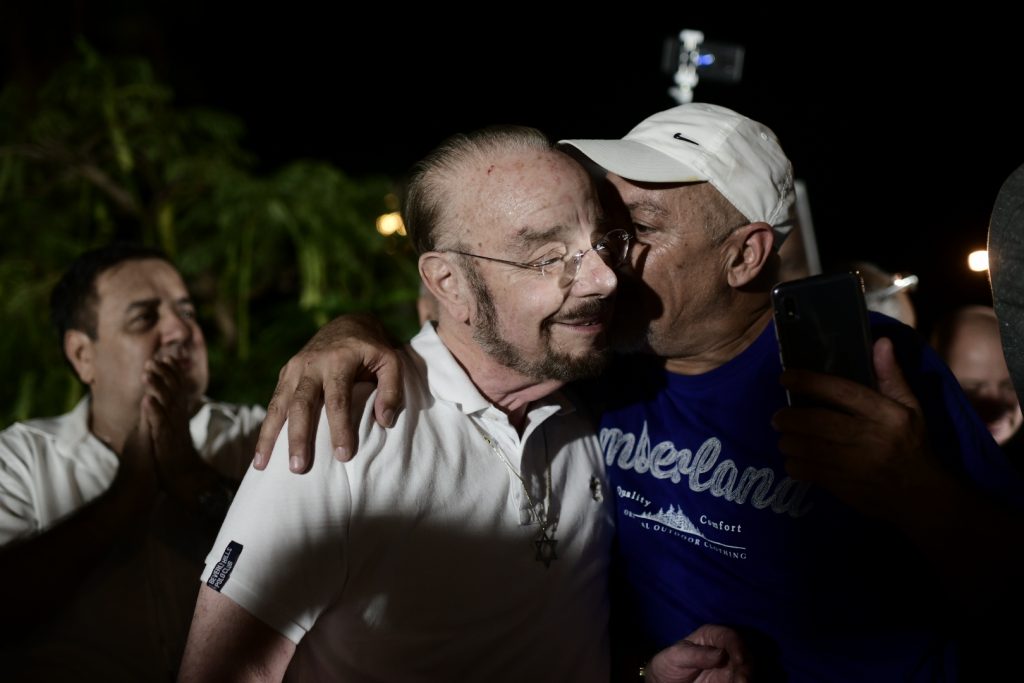 As has been happening in recent days, a mass demonstration was held Motzoei Shabbos outside the home of State Attorney Avichai Mandelblit, as hearings continue into the corruption charges against Prime Minister Binyamin Netanyahu. Dozens of police officers were on duty as over 1,000 supporters of Netanyahu faced off against several dozen leftists, with both sides shouting slogans and waving signs in support of Netanyahu, or against him.

Among the protesters were Charlie Azaria, father of IDF soldier Elor Azaria, who spent over a year in prison for shooting a terrorist who had been subdued after attacking soldiers in Chevron. “There is corruption in the justice system,” he said. “We cannot give up, the people have to have their say. We cannot allow them to make up charges” against Netanyahu. Speakers at the event said that an investigation should be carried out “over the attempt by the prosecutor’s office to bring about a coup” to bring down Netanyahu.

Attorney Yoram Sheftel said at the rally that “the ‘gang’ that crows about the ‘rule of law’ has taken more radical steps in recent months, all with a phony facade of justice. We can already see how Case 4000 is crumbling and I am sure the others will as well.”

The long-awaited hearings before State Attorney Avichai Mandelblit on the corruption cases Binyamin Netanyahu is involved in began last Wednesday. After the hearings, Mandelblit will decide on whether or not to recommend indicting Netanyahu on corruption charges after the hearings. The investigations against Netanyahu include Case 1000, in which Netanyahu is accused of accepting extravagant gifts from millionaire Arnon Milchin, mostly cigars and champagne; Case 2000, in which the prime minister allegedly leaned on the publishers of Yisrael Hayom to limit distribution of their free newspaper in order to benefit from better coverage in rival newspaper Yediot Acharonot; and Case 4000, also known as the Bezeq-Walla News Case, an influence-peddling probe that alleges that Netanyahu offered his good services to Israeli billionaire Shaul Elovich in return for positive coverage on the Walla news site.

In two 11-hour-plus sessions on Wednesday and Thursday, Netanyahu’s attorneys presented the prime minister’s side of the story in Case 4000, and on Sunday, Case 1000 will be discussed. Netanyahu’s attorneys said they have been satisfied with the process so far, and that they presented new evidence that “will give the State Attorney a great deal to think about.” “We felt there was a willingness to hear us out on the part of the State Attorney,” said Yossi Ashkenazi, a member of Netanyahu’s defense team. “By the nature of things we are presenting a different perspective on the claims that the prosecution has made, and we presented new evidence, including documents that were not in the original material used in the investigation.”