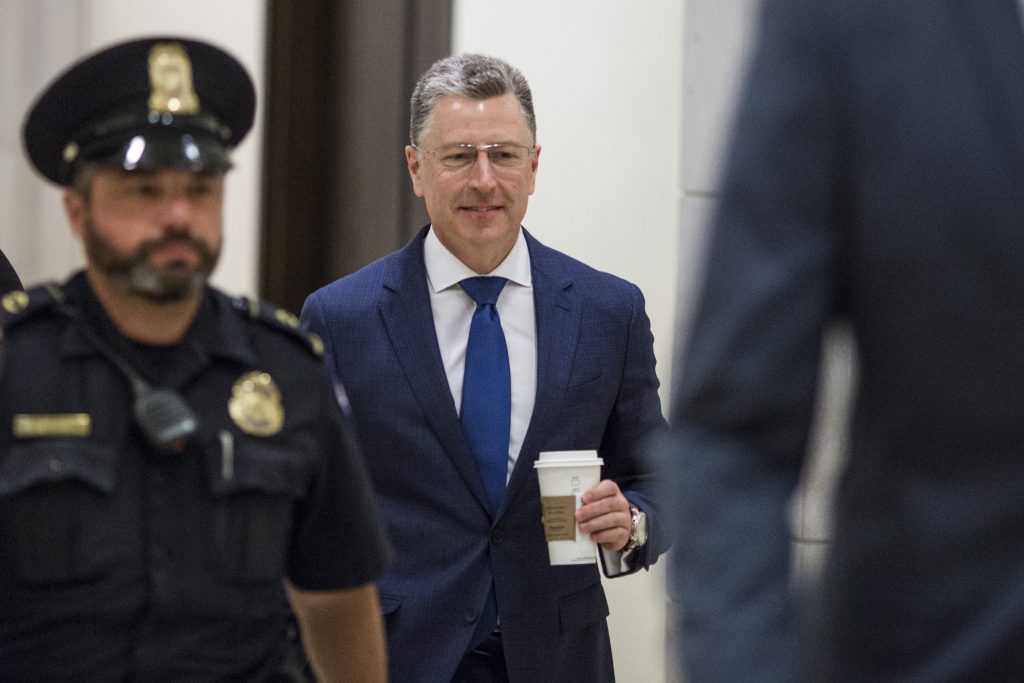 U.S. officials pressured their Ukrainian counterparts to launch investigations that could benefit President Donald Trump’s personal political agenda in exchange for a meeting between the two countries’ leaders, a cache of diplomatic texts released late on Thursday showed.

The exchanges were released by Democrats in the House of Representatives as part of an impeachment investigation to determine whether Trump pressed for Ukraine to probe former Vice President Joe Biden and his son, Hunter Biden, in connection with Ukrainian gas company Burisma.

Biden is a leading contender for the 2020 Democratic presidential nomination. His son was on the board of Burisma for a number of years.

Kurt Volker, who resigned a week ago as Trump’s special representative to Ukraine, provided the messages to members of the House and staff of the House Foreign Affairs, Intelligence and Oversight committees in a closed-door meeting earlier on Thursday.

Democrats are focusing on a July 25 telephone call between Trump and Ukrainian President Volodymyr Zelenskiy in which the Republican president urges Zelenskiy to investigate Burisma and the Bidens.

In the hours before that call, Volker told one adviser to the Ukrainian president that a meeting between the countries’ two leaders was tied to Kiev’s agreement to investigate the 2016 U.S. election, according to the committees.

“Heard from the White House — assuming President Z convinces trump he will investigate/’get to the bottom of what happened’ in 2016, we will nail down date for visit to Washington,” Volker wrote.

Later messages between the aide, Andriy Yermak, and Volker showed dueling efforts to lock in a date for a Trump-Zelenskiy meeting and to issue a statement from Kiev announcing a “reboot” of relations along with the probes into Burisma and the 2016 election.

In a separate exchange last month, another top U.S. diplomat in Ukraine wrote that it was “crazy” to withhold military aid for the country as it confronted Russian aggression, according to copies of the messages released by the panel’s Democratic chairmen, who noted their “grave concerns.”

The cache also included messages from Trump’s personal attorney, Rudy Giuliani, who played a major part in the administration’s dealings with Kiev.

Joe Biden leads in most opinion polls among the 19 Democrats seeking the party’s nomination to take on Trump in the November 2020 election. His campaign has blasted Trump’s efforts as desperate.

In a signal of how Kiev will handle investigations being watched in Washington, Ukrainian prosecutors said they would review 15 old probes related to Burisma’s founder but added that they were unaware of any evidence of wrongdoing by Biden’s son.

Separately, the White House plans to argue that House Speaker Nancy Pelosi, a Democrat, must have the full House vote to formally approve an impeachment inquiry, a source familiar with the effort said.

Without a vote, White House lawyers believe Trump, who has called the impeachment probe a “hoax,” can ignore lawmakers’ requests, the source said, meaning the federal courts would presumably have to render a decision and potentially slow the march toward impeachment.

A White House letter arguing Pelosi must hold a House vote could be sent to Capitol Hill as early as Friday, the source said. It comes as the Democratic-led House Intelligence Committee plans to issue more subpoenas in the coming days as it pushes ahead with the investigation.

“Congress must not back down from our duty to defend the Constitution as … (Trump) ignores the Founders’ warnings about foreign interference at every turn,” Pelosi tweeted early on Friday.

Trump’s gambit is emerging at the end of a storm-tossed week for him as the president lashed out at Democrats, reporters and anyone else standing in his way to air complaints that he was being unfairly accused and had done nothing wrong.

Trump sees the impeachment probe as a harassing follow-up to the Russia probe that investigated accusations he colluded with Moscow in the 2016 presidential campaign. Russia denies interfering in the election.

U.S. intelligence agencies and Special Counsel Robert Mueller concluded Russia did interfere with a scheme of hacking and propaganda to boost Trump’s candidacy and disparage his Democratic opponent Hillary Clinton. But Mueller found insufficient evidence to establish that Trump and his campaign had engaged in a criminal conspiracy with Russia and did not reach a conclusion on whether Trump committed the crime of obstruction of justice.

In a new wrinkle, Trump said on Thursday that “China should start an investigation into the Bidens” over Hunter Biden’s business ties to China.

The Chinese Embassy in Washington did not respond to a request for comment. China experts said Beijing was unlikely to act on Trump’s invitation.

Administration officials did not know Trump was going to raise the issue of China but said he had talked about it previously and they were not surprised by it, two sources familiar with the situation said.

CNN reported late on Thursday that Trump raised the subject of Biden and another political rival, Sen. Elizabeth Warren, in a June call with China’s President Xi Jinping that, like the Ukraine call, was stored on a secure server.

The White House did not respond to requests for comment on CNN’s report.

Trump’s appeal to China was particularly striking given that Washington and Beijing are locked in a bitter trade war that has damaged global economic growth. They are due to hold another round of talks in the United States next week.

Pelosi, on Twitter, raised questions about what Trump may have offered “China in exchange for interfering in our election,” including any possible action on trade.

Trump, in his own tweet, wrote that his efforts to solicit foreign nations to investigate the Bidens have “NOTHING to do with politics.”

Michael Atkinson, who is the inspector general of the intelligence community, is also expected to testify on Friday in another closed-door session centered on his review of the whistleblower’s complaint that lies at the heart of the Democratic complaint.

Members of the House Intelligence Committee will return to Washington from their home districts for the interview with Atkinson, who had determined the complaint raised issues of “urgent concern.”

Rep. Adam Schiff, the committee’s Democratic chairman, confirmed that Atkinson would appear, but the committee has not released any further details.