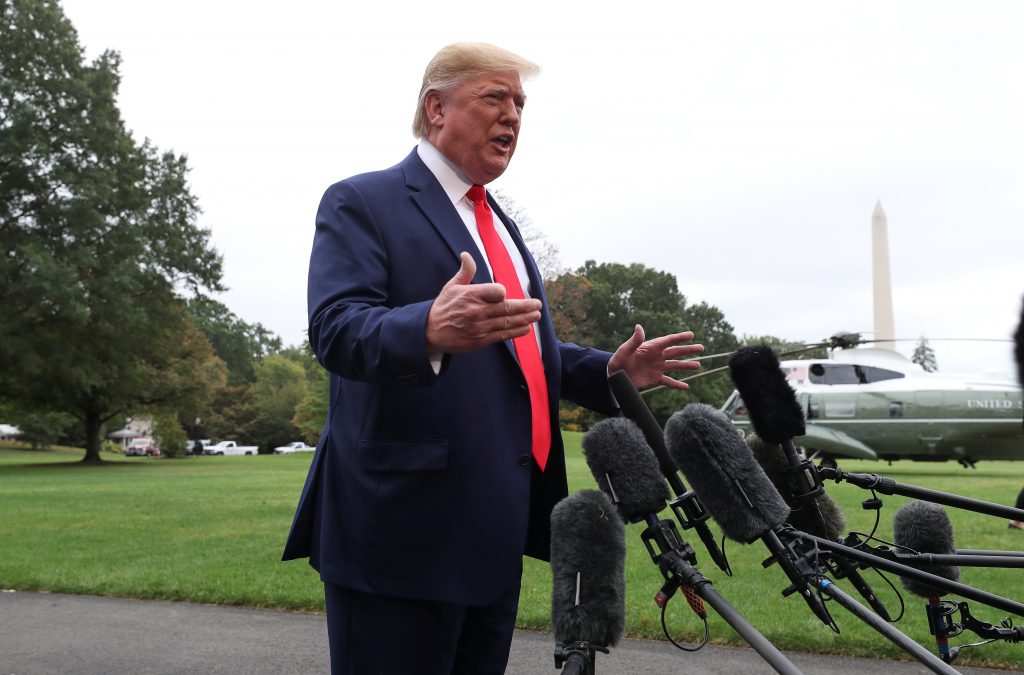 President Donald Trump on Thursday again appeared to invite foreign help in a U.S. presidential election, publicly calling on China to investigate Democratic candidate Joe Biden – similar to a request that has already triggered an impeachment inquiry in Congress.

As he left the White House for a visit to Florida, President Trump told reporters he believed both China and Ukraine should investigate Biden and his businessman son Hunter Biden.

“And by the way, likewise, China should start an investigation into the Bidens. Because what happened in China is just about as bad as what happened with Ukraine,” Trump said.

Questioned about whether he had asked Chinese President Xi Jinping to investigate, Trump said: “I haven’t, but it’s certainly something we can start thinking about.”

Trump’s appeal to China was particularly striking given that Washington and Beijing are locked in a bitter trade war which has damaged global economic growth. They are due to hold another round of talks in the United States next week.

After Trump’s remarks, Biden’s deputy campaign manager Kate Bedingfield said in a statement that Trump was “desperately clutching for conspiracy theories that have been debunked” and “now, with his administration in free-fall, Donald Trump is flailing and melting down on national tv.”

Trump asked Ukrainian President Volodymyr Zelenskiy in a phone call in July to investigate Biden and his son over allegations of corruption. Hunter Biden was on the board of a Ukrainian gas company.

The revelation of the request by a whistleblower prompted House of Representatives Speaker Nancy Pelosi to announce a formal impeachment investigation against Trump last week.

Trump froze $400 million in U.S. aid to Ukraine shortly before he asked its president for the favor, prompting accusations from Democrats that he had misused U.S. foreign policy for personal gain.

The impeachment probe could lead to the approval of articles of impeachment – or formal charges – against Trump in the Democratic-controlled House. A trial on whether to remove him from office would then be held in the Republican-controlled Senate. Many Republicans, however, have shown little appetite for ousting him.

The investigation has angered Trump, whose presidency survived a two-year federal probe that found Russia had intervened to help him win the White House in 2016.

Trump, in July 2016, publicly encouraged Russian involvement in that year’s presidential election campaign concerning cyber-espionage targeting Democratic candidate Hillary Clinton. Trump, referring to a controversy surrounding Clinton’s emails, said at that time: “Russia, if you’re listening, I hope you’re able to find the 30,000 emails that are missing. I think you will probably be rewarded mightily by our press.”

Nicholas Burns, a former U.S. ambassador who served under both Republican and Democratic administrations, said Trump’s comments on Thursday were a mistake.

A longtime U.S. diplomat who served as Trump’s special envoy for Ukraine was due to tell his story to congressional committee staff on Thursday as part of the Democratic-led impeachment probe.

Kurt Volker resigned as special representative for Ukraine negotiations on Friday, the day after the public release of a whistleblower complaint that described him as trying to “contain the damage” from efforts by Trump’s lawyer Rudy Giuliani to press Ukraine to investigate Democrats.