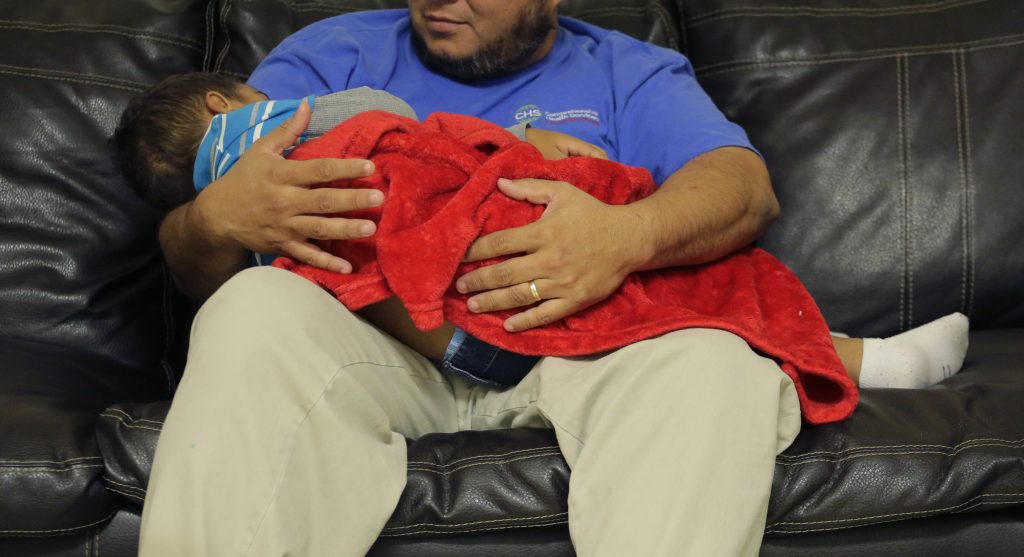 On a recent day in a remodeled brick church in the Rio Grande Valley, a caregiver tried to soothe a toddler, offering him a sippy cup. The adult knew next to nothing about the little 3-year-old whose few baby words appeared to be Portuguese. Shelter staff had tried desperately to find his family, calling the Brazilian consulate and searching social media.

Nearby, infants in strollers were rolled through the building, pushed by workers in bright blue shirts lettered “CHS,” short for Comprehensive Health Services, Inc., the private, for-profit company paid by the U.S. government to hold some of the smallest migrant children.

Sheltering migrant children has become a growing business for the Florida-based government contractor, as the number of minors in government custody has swollen to record levels over the past two years. More than 50 babies, toddlers and teens were closely watched on this day inside the clean, well-lit shelter surrounded by chain link fences.

The children, many in matching black pants and gray sweatshirts, are officially under the custody of the federal government. But a joint investigation by The Associated Press and FRONTLINE has found that the Trump administration has started shifting some of the caretaking of migrant children toward the private sector and contractors instead of the largely religious-based nonprofit grantees that have long cared for the kids.

So far, the only private company caring for migrant children is CHS, owned by beltway contractor Caliburn International Corp. In June, CHS held more than 20% of all migrant children in government custody. And even as the number of children has declined, the company’s government funding for their care has continued to flow. That’s partly because CHS is still staffing a large Florida facility with 2,000 workers, even though the last children left in August.

Trump administration officials say CHS is keeping the Florida shelter on standby in case they need to quickly provide beds for more migrant teens, and that they’re focused on the quality of care contractors can provide, not about who profits from the work.

“It’s not something that sits with me morally as a problem,” said Jonathan Hayes, director of the Department of Health and Human Service’s Office of Refugee Resettlement. “They’re not getting any additional money other than the normal grant or contract that would be received. We’re not paying them more just because they’re for profit.”

Asked about AP and FRONTLINE’s investigation during a White House visit Thursday, Health and Human Services Secretary Alex Azar pushed back and said the findings were “misleading.” But he did not address the government’s ongoing privatization of the care for migrant children.

Former White House Chief of Staff John Kelly joined Caliburn’s board this spring after stepping down from decades of government service; he joined the Trump administration as secretary of Homeland Security, where he backed the idea of taking children from their parents at the border, saying it would discourage people from trying to immigrate or seek asylum.

Critics say this means Kelly now stands to financially benefit from a policy he helped create.

Houston Police Chief Art Acevedo, who served on a federal advisory panel with Kelly, said the retired general told him first-hand that he believed enforcing a “zero tolerance” policy would serve as a deterrent.

“What’s really the motivator, the deterrence or the dollar?” said Acevedo, who signed an Aug. 14, 2019, letter with dozens of law enforcement leaders asking Trump to minimize the detention of children. “I would question that if he’s getting one dollar for that association.”

Kelly did not respond to requests for comment. But in a statement, Caliburn’s President Jim Van Dusen said: “With four decades of military and humanitarian leadership, in-depth understanding of international affairs and knowledge of current economic drivers around the world, General Kelly is a strong strategic addition to our team.”

Earlier this year after leaving government, Kelly was widely criticized by activists who spotted him in a golf cart at Homestead.

One teenage girl who spoke with AP and FRONTLINE said she and other children were constantly watched while detained inside Homestead, not allowed to touch each other, and there were alarms on the windows.

“It looks like a camp, but sometimes it seems like a jail because you feel very trapped,” said the girl, who spoke on condition of anonymity out of concern for her safety.

All teens were transferred out of Homestead in August after critics – ranging from members of Congress to onsite protesters – said holding that many migrant children in a single facility was abusive. Meanwhile CHS was getting more business housing migrant children. Today it’s operating six facilities including three “tender age” shelters in the Rio Grande Valley that can house the youngest, infants and toddlers.

Department of Health and Human Services’ Office of Refugee Resettlement runs migrant children programs by funding 46 organizations that operate more than 165 shelters and foster programs for over 67,000 migrant children who came to the U.S. on their own or were separated from parents or caregivers at the border this fiscal year.

Overall, the federal government spent a record $3.5 billion caring for migrant children over the past two years to run its shelters through both contracts and grants.

The Obama administration also grappled with how to handle large numbers of children crossing the border. In fiscal year 2014, some 68,000 migrant kids were apprehended at the border, as compared to 72,000 this year. President Barack Obama’s head of U.S. Customs and Border Protection Gil Kerlikowske said the difference between now and five years ago was how quickly the government reunited kids with their families or other sponsors.

Under Trump, the numbers of detained children grew in part due to new, strict requirements to screen every adult in a potential home, which significantly slowed reunifications until the policy ended late last year.

The government doesn’t disclose the names of individual shelters, nor how many children are in each one. But confidential government data obtained by the AP shows that in June nearly one in four migrant children in government care was housed by CHS. That included more than 2,300 teens at Homestead, Florida, and more than 500 kids in shelters in Brownsville, Los Fresnos and San Benito, Texas. Each teen held at Homestead at that time cost taxpayers an average of $775 per day.

At the time, a total of 13,066 migrant children were being held in federally funded shelters. Those numbers have dropped sharply over the summer. By early October, HHS said there were 5,100 children in their care.

Andrew Lorenzen-Strait, who until recently helped run adult custody programs at U.S. Immigration and Customs Enforcement, said some former ICE staff now work at HHS, and have brought the concept of privatization as another model for detaining migrant children. He said it mirrors a similar shift that occurred with ICE’s adult immigration detention centers, where populations soared after immigrants were moved from county jails and into for-profit, private facilities.

“The Office of Refugee Resettlement has acted like they have a kind of a shield and they don’t work with DHS. They say we are the children people, you are the enforcement people, but that is blurred now,” Lorenzen-Strait said.

After 18 years in federal service, he recently quit in frustration over concerns about government actions, including the treatment of migrant children. He went to work for nonprofit Lutheran Immigration and Refugee Service which places migrant children in foster homes.

“These aren’t commodities. They’re kids, and they don’t need to have big box stores serving them,” he said. “This isn’t Amazon.com. You can’t just order up migrant care.”