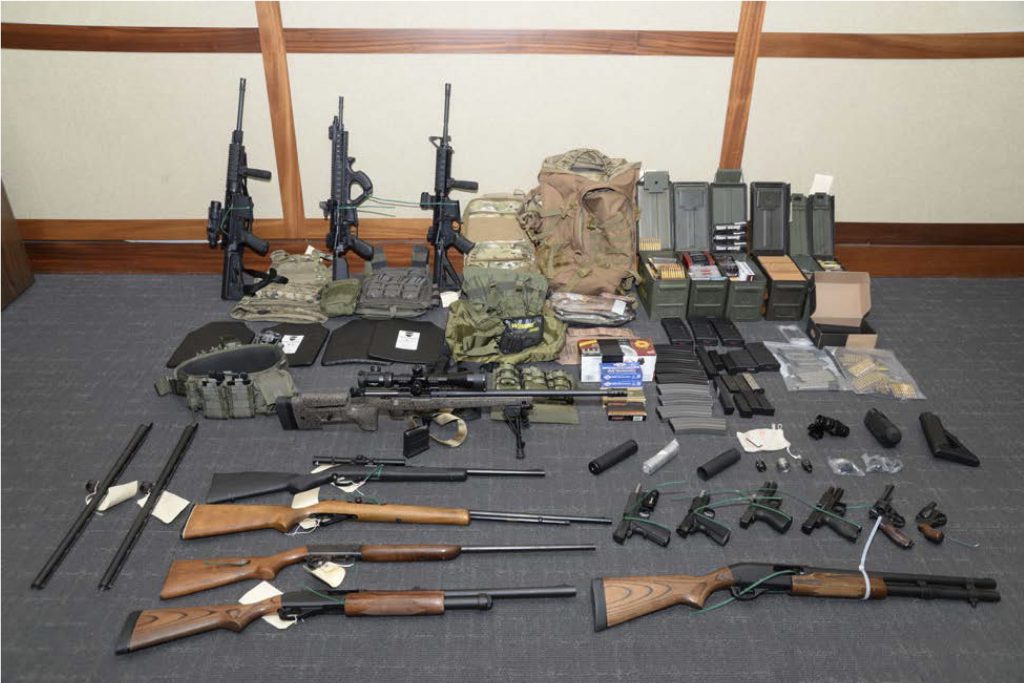 Christopher Hasson’s guilty plea to all four of the counts he faced resolves a case in which federal prosecutors called him a self-described white nationalist and domestic terrorist intent on carrying out mass killings.

But prosecutors didn’t file any terrorism-related charges against Hasson, who was arrested in February. With his plea, he now faces up to 31 years in prison. His sentencing is set for January 31.

After the hearing, Hasson’s public defender issued a statement saying his case had been “mischaracterized and sensationalized.”

Assistant federal public defender Liz Oyer said Hasson “was not plotting a terrorist attack or any of the abhorrent acts that the prosecution has repeatedly speculated about but never actually charged.”

She also said, “Mr. Hasson never meant any harm to anyone. He deeply regrets the pain and embarrassment that he has caused his family and the U.S. Coast Guard …”

Two of the four counts in Hasson’s indictment charged him with illegally possessing unregistered and unserialized silencers. He also was charged with possession of a firearm by an unlawful user or addict of a controlled substance, and illegal possession of tramadol, an opioid painkiller.

In a February court filing, prosecutors said Hasson “intends to murder innocent civilians on a scale rarely seen in this country.” They also said he has espoused extremist views for years and drafted an email in which he said he was “dreaming of a way to kill almost every last person on the earth.”

In a 2017 letter he sent to himself as a draft and apparently wrote to a neo-Nazi leader, Hasson identified himself as a white nationalist for over 30 years and “advocated for ‘focused violence’ in order to establish a white homeland,” prosecutors said.

Investigators found 15 guns, including seven rifles, and more than 1,000 rounds of ammunition at Hasson’s basement apartment in Silver Spring, Maryland. He researched how to make homemade bombs and mortars, studied sniper training and used his government computer to search for information about Nazis and Adolf Hitler, prosecutors said.

Last month, a federal judge refused to dismiss the gun charges against Hasson, who has been held in custody since his arrest. U.S. District Judge George Hazel rejected defense attorneys’ argument that charging Hasson with unlawful possession of firearm silencers violates his Second Amendment right to bear arms.

Prosecutors have said Hasson appeared to be planning attacks inspired by the manifesto of Anders Behring Breivik, the Norwegian right-wing extremist who killed 77 people in a 2011 bomb-and-shooting rampage.

Oyer has said prosecutors found no evidence to back up terrorism allegations. She accused them of seeking to punish Hasson for “private thoughts” he never shared.

In a court filing last week, Hasson’s lawyers asked the judge to bar prosecutors from presenting any trial evidence linking him to white nationalist views or associations or “any plans or preparations he allegedly made to commit an act of violence or terrorism.”

Hasson, a former Marine, worked at Coast Guard headquarters in Washington on a program to acquire advanced new cutters for the agency. He has remained on active duty pending the outcome of the criminal case.